Goldmine of the Future

Possibly the Largest Metals Mine on the Planet

It looks like an ordinary forest — the kind you would see in any Midwestern state, like Colorado or Montana...

But it's anything but "ordinary."

You see, I’m standing on what could become one of the largest metal mines in the entire world. 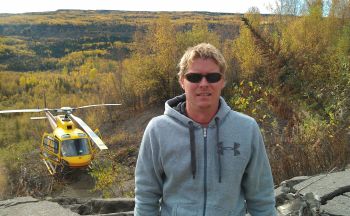 It’s so big, the Canadian media calls it:

“… an endless river of base and precious metals…”

“… with the potential to generate billions of dollars in wealth…”

And when I recently discovered that some of the wealthiest and most successful resource investors in North America were putting their own money into this project, I hopped on a plane with Nick Hodge and Andrew Mickey to see it firsthand.

Once we landed, I immediately chartered an AS-350 helicopter at $2,000 an hour. It was a steep price, but I needed to see this metals-rich property as soon as possible.

What we saw blew us away...

I knew that I was looking at possibly the greatest investment of my lifetime.

You can literally scoop up gold, silver, copper, nickel, cobalt, and zinc with your own hand.

That’s what makes this potential mega-mine so different — and why the Canadian media is calling it “a game changer.”

Every metal vital for modern civilization is right there, billions upon billions of dollars' worth.

Perhaps more important, the area is blessed with an abundance of highly-sought-after rare earth elements like lithium and vanadium, vital to the United States military and the growth of the hybrid automobile market.

But that’s only half the story...

You see, this is still an early-stage project. Only the super insiders are aware of its potential.

Because of this, I found out the company that controls this property is still relatively unknown — its shares, super cheap.

The company that owns the mineral wealth of this property currently trades at a market cap of less than $20 million. And that’s peanuts, because it’s estimated that there are 24 billion tonnes of vital metals sitting there at the surface.

This is a great way to leverage a small amount of money into a potential life-changing windfall.

As I said earlier, that’s exactly why some of the wealthiest and most successful resource investors in the world have put their own money into this project.

And who can blame them, when you can buy potentially hundreds of thousands of dollars' worth of vital metals for the equivalent of a case of beer?

That’s how big this polymetallic formation is.

And here’s the clincher: This mega-metals property sits right next to the legendary oil sands at Fort McMurray in Alberta, Canada, where the oil also sits right at the surface.

Are you starting to see the opportunity here?

The Alberta government has known about it for years. But the technology was never there to extract the metals.

Alberta believes it could control two of the largest and most lucrative mining operations on the planet in the years to come: oil and metals.

And I believe this Alberta polymetallic mine project will turn early investors into millionaires.

Nick Hodge has an exclusive report on the trip we took to Fort McMurray in September — including video footage of the property and conversations we had with the CEO of the company, who happens to be one of only four geologists who’s an expert in this type of polymetallic formation.

Nick will also explain the technology that will unleash this metal wealth.

This report will be available in the next couple of weeks...

Be on the lookout for it.