I Told You So

Last week, I told you that gold was going to rally due to an oversold position and a fat doji formation on the chart... and hey, I was right.

A doji is a candlestick formation that looks like a cross. If it shows up at the end of a long up (or down) trend, it is a turnaround signal.

It is the visual representation of the bear and bulls fighting it out gladiator style...

When they fight themselves to a standstill, the momentum is exhausted and the change in direction is almost certain. 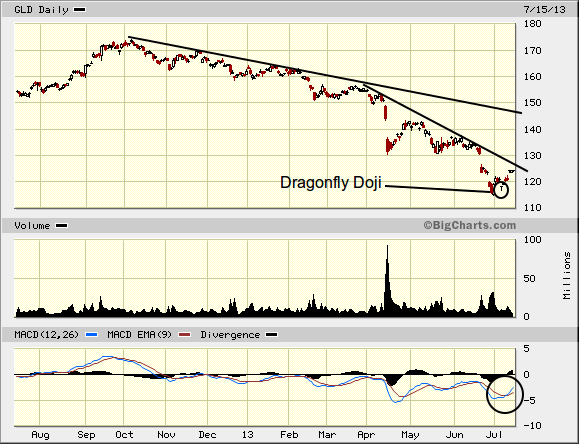 Above is how it looks on the Gold ETF GLD.

The probability is that this recent rally is a dead cat bounce.

So if you're trading options, it is time to sell and buy back when it retests the low.

You can trade this chart, but don't count on it going straight up from here; “V”-shaped recoveries are rare. My prediction is consolidation throughout the summer.

Gold climbed last week after Helicopter Ben Bernanke said he was just kidding about “tapering” his bond buying. What he meant to say was that he was going to keep printing money as long as Wall Street and Washington wanted him to. And they do. Boy, do they.

Bernanke's proposal to reduce spending $85 billion a month on debt was met with such abhorrence and fear-induced selling that he quickly recanted. And the market rejoiced.

“I don't know what I'm doing!” Ben exclaimed. “There is no exit plan!”

Gold loves money created out of thin air because gold bugs still believe you can't just print money forever without consequences, that you can't get something for nothing; that there is no free lunch.

We all know that money printing destroys money. History is replete with examples: Zimbabwe, Argentina, the United Kingdom. But who knows, maybe the world GDP can grow its way out this hole like the Keynesians talk about...

Maybe it can't. No one knows for sure.

But buying gold after a 40% sell-off seems like a wise idea either way.

Buy low, sell high is what Grandma used to mumble after she passed out in the Barcalounger.

The numbers tell us that the world isn't growing very fast...

According to new numbers put out by the Commerce Department, if we are going to grow, we need to do it without the consumer. Retail sales increased just 0.4% last month, despite the fact that auto sales soared 1.8%. (Buy Ford (F: NYSE).)

The market was expecting a 0.8% increase in the retail number. We couldn't even jump that low hurdle. Furthermore, the 0.4% will likely be revised down next month.

Bad news is good. Poor retail sales mean Bernanke can keep printing, which drives down the dollar and pushes the malleable metal to a three-week high.

Stocks go up and stocks go down, but the dollar has been falling since they invented the Federal Reserve in 1913...

The 1913 dollar is now worth four cents.