You've heard by now that the U.S. Embassies in Libya and Egypt have been attacked by angry mobs of Muslims. The U.S. Ambassador and three other American diplomats were murdered.

This harks back to the dark days of 1980 when a Muslim mob took hostages in Iran.

My first reaction was to listen to Ron Paul: Stop playing bribes to Barbary pirates and bring everyone home; “not one penny for tribute” and all that.

The Middle East and North Africa aren't worth one U.S. Marine, nor the treasure we waste to send them there.

My second thought was to do as the Romans and leave not one stone atop the other, and salt their fields — or perhaps we can send the Constellation back to destroy the Dey's palace...

Perhaps it is this new uncertainty that has pushed gold to new highs.

I've said repeatedly that gold was going to $1,900 — and fast. It has broken its consolidation pattern and is now off to the races... 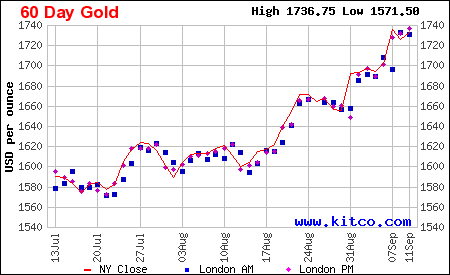 Gold is also moving up on the news that the German court has said the country is allowed to bail out the Eurozone, or “become more integrated,” as Deutsche Bank put it.

The German taxpayer is now on the hook for 25% of the 500 billion euro gift to gifters.

In the wacky Wall Street world of more debt is better, this means the euro will move up against the dollar.

As gold and oil are priced in dollars, the prices of those and most other commodities are soaring.

The next catalyst for gold is tomorrow's Federal Reserve meeting.

That's when Helicopter Ben is expected to announce that he'll start pumping $50 billion a month into the banks, via the Treasury, for the foreseeable future. It is sure to have a clever name that rhymes (Cash for Cronies?).

In fact, all the market loves a bailout.

Goldman Sachs is rallying hard to $118. Apple (NASDAQ: AAPL) just announced the new iPhone, and good ole Microsoft (NASDAQ: MSFT) is setting up for a banner quarter (more on that here).

I don't know if it's because I stopped watching the news on TV, but it seems to me the price of oil is over $4 a gallon and isn't getting any media play.

The oddity is that gasoline was $4 a gallon when oil was at $147 a barrel.

I was talking to my good friend Keith Kohl a few minutes ago about this.

He reminded me that as of February 2012, the price of oil only makes up 72% of the price of gasoline. The rest is made up of distribution and taxes.

He ticked off the facts on his fingers that have changed the distribution game:

Sure, the refineries that are left — like Marathon Petroleum Corporation (NYSE: MPC) — are picking up work and growing margins... 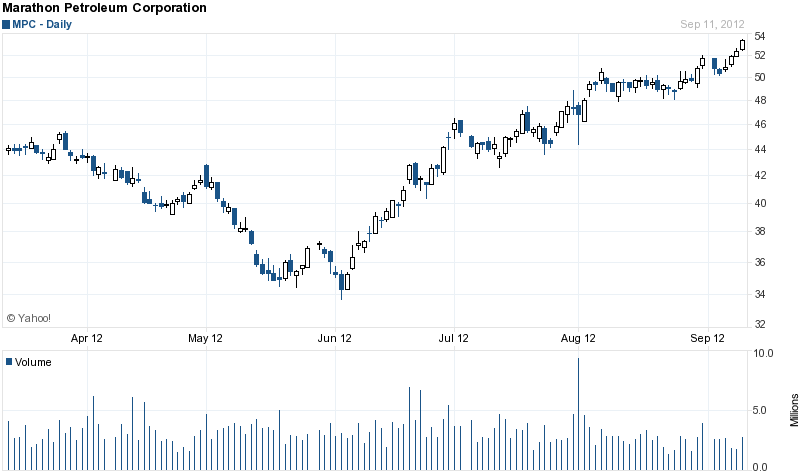 As you know, Keith Kohl, the brains behind Energy Investor, is a brilliant analyst who has been reaping big rewards from oil, gas, and shale plays.

He has banked his readers 170% on American Oil and Gas and 574% with Brigham Exploration.

There's still time to get in on his most recent picks — all of which are premium buyout targets still trading for less than $10 a share.

Keith was also telling me about his next round of must-own energy stocks: the companies set to explode as the energy sector narrows its focus on the transition happening in North America today and in the years to come...

Look for his report in the next few weeks.