Even at $1,200 an ounce, gold is still one of the safest investments you can make.

That's because, unlike 99.9% of other investment vehicles, gold has an intrinsic and universal value that has supported a strong market price throughout human history.

And now we have even more reason to remain confident in gold as a safe investment, thanks to a surge in mining production costs that may help buoy gold prices for decades to come. It all starts with the...

Mining for gold is often romanticized as an adventurous, sometimes dangerous, way to add to your income. But as a business, it's very difficult to make a profit. And the real danger is financial.

Gold production is a very energy- and labor-intensive process, making it very expensive to operate a gold mine... especially now. Over the past few years, rising energy and labor prices have forced global gold production costs to increase quite dramatically.

According to GFMS, a world authority on gold markets, Barrick's current production costs are about average. Data from GFMS shows world gold production costs for the first half of 2009 averaged $457/oz. This average cost is down from $623/ounce in the third quarter of 2008.

Gold production costs swelled over 150% in five years between 2003 and 2008. And due to recent increases in energy and labor prices in the second half of 2009, experts estimate global gold production costs may average up to $500 an ounce for the year. Take a look: 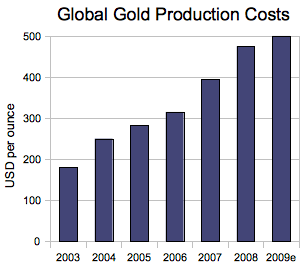 In the long-run, the average gold production cost must increase.

The ever-increasing nature of the cost of production may help support a growing valuation floor above $500 for gold prices. And it's one of the reasons that I think...

Gold Has the Best Worst-Case Scenario

The price of gold should always find price support near the average global cost of mine production.

That's because if the cost of production significantly exceeds the value of the yield, operators will likely halt output until market conditions improve. It's simply a matter of economics.

This halt will decrease the total supply of new mine production. And this decrease may ultimately help buoy gold prices to varying degrees depending on demand.

So if the average global cost to produce gold is $500 an ounce, I think gold's ultimate valuation floor may be near that level.

Aside from being the safest investment, I also believe gold will be one of the easiest ways to profit over the next 12 to 24 months. The bottom line: I don't believe that we've seen the biggest moves this gold bull market has to offer. And the time for gold to build up a head of steam and tackle is inflation-adjusted high of $2,500 has never been better.

In order to leverage gold's huge investment upside potential for members of my Hard Money Millionaire advisory service, I am currently building a brand-new portfolio of junior mining stocks. So far, I've recommended three stocks in the portfolio (with a fourth to be added sometime next week), but have already done quite well. In fact, you can take a peek at my junior mining portfolio just by clicking here.

In doing research for this article, I learned gold production costs currently average about $450 an ounce for companies, including Agnico-Eagle (NYSE: AEM) and Newmont Mining (NYSE: NEM). 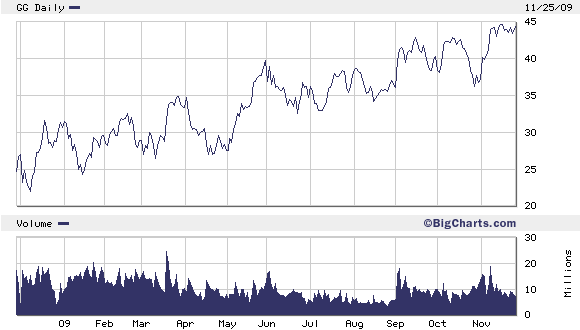 Goldcorp is one of the largest gold mining companies in the world. With 14 operations and development projects, Goldcorp expects to produce 2.3 million ounces this year at a total cash cost of $365 an ounce. During the third quarter of 2009, the company produced over 620,000 ounces for total cash cost of $295 an ounce.

Eldorado Gold is a mid-tier gold producer active in exploration and development in Brazil, China, Greece, Turkey, and surrounding regions. The company plans to produce a total of about 550,000 ounces of gold this year at a total cash cost of $340 an ounce. During the third quarter, Eldorado produced 89,000 ounces at $297 an ounce.

Minera Andes is a small but successful gold and silver miner. The company producers almost an equal amount of gold and silver by value, but is worth mentioning here because it is currently one of the lowest-cost small-cap gold producers around.
Minera will produce over 75,000 ounces of gold this year at an estimated $330 an ounce, although there is no official guidance. During the third quarter, the company produced 22,000 ounces of gold at $313 an ounce.

Enjoy the rest of your holiday,