Every Dog Has Its Day

When I first started writing about stocks and finance about 15 years ago, Brian Hicks told me that picking a stock was like buying a house...

They are all different, but they all have a determinable value.

You can judge a house by the number of bedrooms, the size of the lot, or the reputation of the local schools, among other things. And you can judge stocks on P/E ratios, growth, earnings, cash, book value, etc.

I've known many successful real estate investors in my time. They are a unique lot.

One guy I knew told me the secret to investing in real estate is to drive out from a city until you can afford to buy 40 acres of land. Then you rent a bulldozer and plow a dirt road in from the highway. He said, "You'll have the first lot sold by the time you put up a sign, and the third lot will pay for your investment."

Another guy told me to follow the creative class. Starving artists love beauty and have no money. They find places — like a rundown Brooklyn ten years ago — and make them vibrant and attractive. Pretty soon, they price themselves out of their own neighborhood.

Another guy I knew bought around Washington, D.C. His theory was that government never shrinks nor has a recession. (Sadly, he is spot-on.)

Like houses, stocks don't just rely on value — they also rely on a catalyst of growth.

But first, let's find some value...

When I think about long-term investments, the first thing I ask myself is, What market segment is hated the most right now?

Some simple research will tell you the worst-performing sector in the S&P 500 for 2013 is materials. This includes companies like U.S. Steel (NYSE: X) and coal companies like Peabody (NYSE: BTU), as well as large industrial metals miners like Anglo American Plc. (LSE: AAL), which has been cut in half.

Stock charts on these companies look dreadful. We aren't quite at 2009 lows, but we aren't far off, either. It says something about the false nature of the global “recovery” when none of the raw material used in manufacturing has found a bottom.

Still, don't let that put you off.

We aren't trying to catch a falling knife here. The point of long-term investing is to buy low and sell high.

Sure, there are a lot of momentum traders who make a go at buying high and selling higher, but you never see their names on the Forbes' Richest List.

Gold, platinum, and silver miners are a subset of the materials group that have been especially hard hit over the past year.

The blue chip industry leader Newmont Mining (NYSE: NEM) has been hit particularly hard, dropping from $70 to the low $30s. It's not without reason: The drop in gold prices has led to a major rerating of proven reserves.

For nearly a month the price (of gold) has languished around $1,400 an ounce, which could force more miners to write down the value of their reserves — calculated based on a higher price — and eroding the value of projects, some of which may no longer be profitable...

And the gold industry has not been immune... Barrick Gold, the world's top gold producer, wrote off $4.2 billion in February... Kinross Gold Corp took a $3.2 billion charge. It previously wrote down $2.94 billion in goodwill.

Newmont Mining rates its gold reserves at $1,400 an ounce in order to finance its projects.

Gold is now at $14.85 an ounce, which puts some of its projects in jeopardy. The company is already shutting down expensive mines and cutting its workforce. This news is currently being priced in.

Here's the five-year chart for NEM in weekly increments: 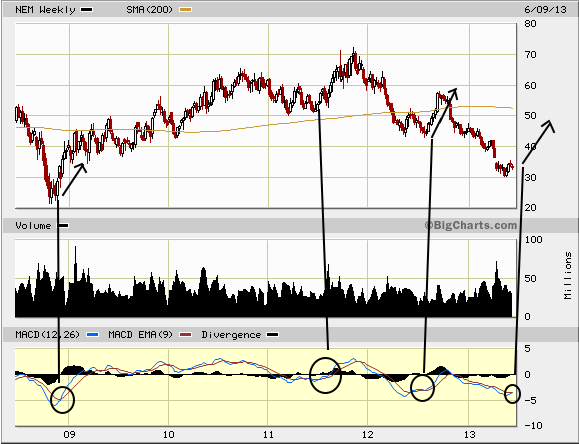 As you can see, when the MACD indicators cross below the 0 line (the bottom indicator), the price of Newmont's shares go up over the next few months. Furthermore, the share price is well below the 200-day moving average, which suggests a reversion to the mean. On the value side, NEM has a P/E of 10 and pays a 4% dividend.

Newmont has gold mines in Peru, Ghana, Indonesia, Mexico, New Zealand, Australia, and the United States. It is the only gold miner in the S&P 500. Its gold reserves are 99 million ounces.

I don't know what the future will hold, as I'm not a seer.

One can envision a number of scenarios — including trade wars between Europe and China, real wars between Japan and China, or a Syrian crisis that explodes in the Middle East, causing a shock to the global banking system and destroying the current Ponzi trade... Interest rates could keep going up. The Fed could easily lose control of inflation.

On the flip side, I can also imagine every central bank in the world printing money for the next ten years with nary a hiccup.

That said, you don't need an apocalypse to make money in gold miners...

You just have to know two things:

It is unknowable at which point this will happen — and truth be told, I'm not going to be fully committed unless NEM hits the 2009 lows around $23, or it breaks out of its current downtrend.

That said, we are likely one to six months away from these tipping points.

You might want to start averaging in on the down days.