Gold Rerated as a Zero-Risk Asset

Sour economic news has caused the price of gold to spike.

There are civil wars in the Middle East. U.S. diplomats have been murdered in Libya. And the second and third largest economies on earth — Japan and China — are slap-fighting over a pile of rocks in the middle of the Pacific, causing Japanese car sales in China to fall by half.

Greece, Italy, Spain, Portugal, and now even France are on the brink of economic and political Ragnarök.

The United States is mired in debt and malaise of comparable proportions — and yet it has produced an election where the leading candidates exchange catty remarks over a giant yellow Muppet named Big Bird. 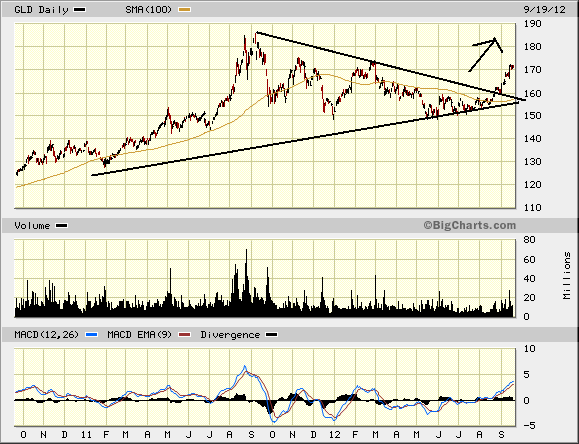 Fascism by Another Name

These are historic times with serious global problems, and in the face of all this we humans remain leaderless, divisive, and lost.

In response to years of high-risk gambling that failed, the large multinational banks and their cronies at the various central banks have been crushing CRT+P on their secure black laptops, adding zeros and printing currencies with abandon.

This is banker-speak for “print more money.” It is self-serving cronyism at its best.

If you make more of something, it becomes less valuable — end of story.

History is replete with the horrific ramifications of currency debasement. (Remember, the hyper-inflation of the Wiemar Republic puked out Hitler.)

Fascism is the marriage of corporations and government — in other words, cronyism kicked up a notch.

I am reminded of the great Yeats line: “And what rough beast, its hour come round at last, / Slouches towards Bethlehem to be born?”

The Greek Nazi party recently gained 21 seats in Parliament and won 7% of the vote.

But it is not the end of the world yet, my friends. We have some fight left in us...

Gold has broken out of its long-term consolidation pattern and is ready to stairstep to the next level around $2,403 a troy ounce — and $2,753 after that.

Ben Bernanke and the Fed have made it abundantly clear they are out to destroy your purchasing power. Bernanke is creating $85 billion a month until unemployment improves (or the world gets massive inflation).

In Bankers We Trust

Today the European Central Bank said they will not print money to get out of their debt crisis.

The boys in Brussels instituted a thick and technical scheme they called "sterilization of monetary funds."

I won't go into the ludicrous and translucent details. Just know the Germans called them out on it within two hours.

From the WSJ: “The Deutsche Bundesbank issued a statement reaffirming that its President Jens Weidmann still considers bond purchases “too close to financing states via the printing press.”

Japan, China, India, Saudi Arabia, and Brazil are all increasing the money supply. This will eventually send investors to the only reliable currency: gold.

But money printing and currency won't be the biggest catalyst for gold price increases next year. Not even close.

The biggest catalyst for gold is a massive reevaluation by the Basel Committee of Bank Supervision.

BCBS sets the international rules for banks. They have reacted to the 2008 debt crisis by changing the game for collateral.

The new rules mean Tier 1 collateral, or assets, will have to rise from 2% to 7% of loans. This means the banks will have to hold more money or lend less — exactly opposite of what their governments are trying to do by printing more money (but you know, whatever).

But wait, it gets better...

After the gold crash in the 1980s, the Basel Committee rated gold as a risky asset, and government bonds and real estate as zero risk. Of course, these geniuses got it completely backwards. Global real estate has crashed and sovereign bonds in places like Greece and Spain are junk.

So now they are trying to correct that mistake by rerating gold as a Tier 1 asset, or “zero risk” collateral — the same as sovereign bonds.

Currently, gold is rated as a Tier 3 (or third-class) asset. This means banks can only carry 50% of its market value as capital.

Needless to say, this inhibits the desire for banks to hold gold... The more Tier 1 (or first-class) assets a bank has, the more money it can lend.

But the Basel Committee is turning gold into a Tier 1 asset so it can be carried at 100% of its value.

This would double the value that banks place on gold almost overnight.

And it's already happening... 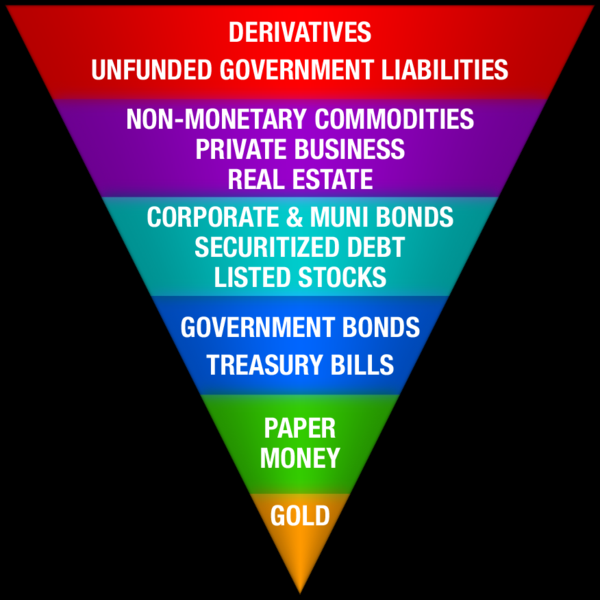 I've posted the chart at right before (click to enlarge), but I think it's important and pertinent.

John Exter (1910-2006) was vice president of the Federal Reserve Bank of New York. Among other things, Exter is credited with creating the Central Bank of Ceylon, but he is best known for his Golden Pyramid.

It is a simple visualization of risk.

Gold is the least risk/most stable value at the point, while asset classes on progressively higher levels are more risky at the top.

The chart is also representative of the size of riskier assets in the world: the higher and bigger on the chart, the more of the asset there is worldwide and the greater its total value...

All gold ever mined will fit in two Olympic swimming pools. Compare that to the size of the derivative market, which is estimated to be 1,200 trillion dollars, or 20 times the global economy — but no body really knows.

Right now, the world is in massive debt and denial. This is why Basel III is attempting to reduce risk and revalue gold as “zero risk” collateral.

The new rules are already being implemented, but will really get going after January 1.

You'll want to position your portfolio before the new rules are adopted starting on January 1, 2013.