Gold and Silver Are Headed for Record Highs

This Gold Chart Says It All

Gold and silver are on fire.

The yellow metal is finishing up the month of January with a gain of more than 10%.

But silver is the star... It’s going to double the performance of gold for the month.

To put that into perspective, silver’s January gain has outperformed the Dow’s 2011 performance. It also outperformed last year’s gains in the NASDAQ and S&P 500.

You might think that since these metals are up so much for the first month of the year, they’re ripe for a pullback. And that may be correct.

However, the charts of both gold and silver — but especially gold — are insanely bullish...

This is a weekly chart of gold going back nearly three years: 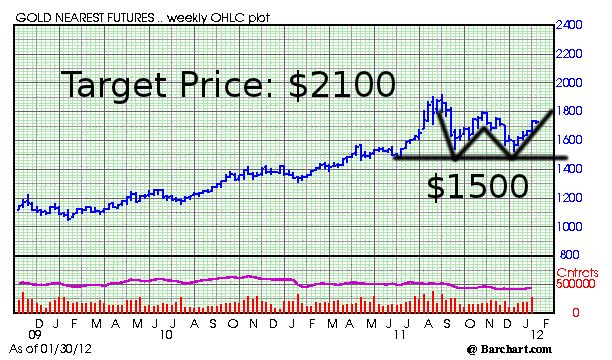 As you can see clear as day, gold is forming an ominous double bottom technical formation, represented by the large “W” pattern that began forming last September.

This “W” pattern is so huge and so clearly obvious that I think we’re going to witness an explosive breakout to the upside in gold.

Who knows where it goes from there...

If gold breaks out from its “W” pattern and reaches $2,100 an ounce, then that would be a 21% gain from current levels.

The same chart pattern is forming in silver, too.

The fundamentals of the precious metals market support the technical picture.

You see, regardless of charts, it’s still about supply and demand.

Last week, I told you that the Chinese New Year (the Year of the Dragon) is bullish for gold and silver.

Recent reports from China reveal they imported 85.7 tons of gold in October, a 40-fold increase from October of the previous year.

According to Bloomberg and reported by Chris DeHaemer in yesterday’s Wealth Daily:

Gold traders are bullish for a fourth consecutive week, betting that the Federal Reserve’s pledge to keep interest rates low until late 2014 will extend the metal’s best start to a year in more than three decades.

Nine of 15 surveyed by Bloomberg expect prices to gain next week. The value of gold held in exchange-traded products jumped $3.9 billion on Jan. 25, the most since October, as the central bank laid the groundwork for a possible third round of asset purchases, data compiled by Bloomberg show. Lower interest rates increase the appeal of bullion because it generally earns investors returns only through price gains.

A third, fourth and fifth round of easing “lie ahead,” Bill Gross, who runs the world’s biggest bond fund at Pacific Investment Management Co., wrote in a Jan. 25 Twitter post. The European Central Bank kept interest rates at a record low this month as the region contends with a spreading debt crisis.

The 2,359.638 metric tons of gold held in ETPs backed by the metal is within 1.5 percent of the all-time high set last month and exceeds the reserves of all but four central banks.

One of Greg McCoach’s favorite phrases is that they call silver and gold "precious metals" for a reason — because it’s such a tiny market.

And when the masses jump into gold — even a tiny portion — it’ll send the price of gold up dramatically.

That event may be coming soon. It’s a perfect storm for gold and silver.

P.S. You'll want to be in a position to profit from gold's perfect storm, and that means getting up to speed on the nuts and bolts of the precious metals market. Our seminar at 6 o'clock tonight (EST) is designed to help you do just that. But you have to sign up to view it right now, because it begins in a few hours.