It’s a scary headline, I know. But it’s something that’s becoming more and more obvious as days turn into weeks into months into years.

The first U.S. coronavirus stimulus package was a perfect example of the disdain the government, and the elites that run it, feel for the middle class…

As a close friend of mine eloquently put it:

If you’re low income, you get a check.

If you’re high income, you get zero interest loans.

If you’re middle class, you get f*cked.

There’s a war being waged against the middle class in this country and around the globe. And there’s nothing we can do to stop it.

You Can’t Sit Here Have That

I grew up with parents who encouraged me to save money for the future. When I was a little kid, they took me into the bank with my birthday checks from the grandparents and had me set up a savings account.

At the beginning of 1986, you could earn close to 9% a year with a high-yield savings account. But that was just the average. Some banks actually offered double-digit rates on savings accounts back then.

But today (well, technically yesterday by the time you’re reading this), I did some research and found that the highest annual percentage yield you can get on a high-yield account is 1.15%.

And the fifth-highest rate you can get is 0.20%. Talk about pathetic returns. 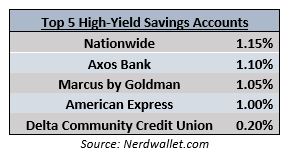 I also grew up in an era in which as you got older, you were supposed to allocate more of your savings to risk-free assets like U.S. Treasuries. Back in 1990, those paid you an interest rate between 8.06% and 8.57% depending on the length of time to maturity.

Today (again, yesterday, for you), they offer rates between 0.11% and 1.39% depending on the maturity date. If you’re willing to lock up your money for 30 years, you can get that sky-high 1.39% — just a shade less than inflation.

Another One Bites the Dust

Now, just last week, the U.S. government banned banks from raising dividends or buying back their shares. So, the last bastion of yield for investors — dividend-paying stocks — is finally under attack.

They already took away all the other ways for middle class folks like us to capture yield and generate income. And now they’re coming for our dividends, too!

It’s a clear attack on the middle class and its future in this country. And it’s going to cause hundreds of thousands (perhaps even millions) of people to completely change their retirement plans.

I mean, without the yield you used to get from U.S. Treasuries or high-yield FDIC-insured savings accounts, most retired folks who need steady income have been forced into dividend stocks.

But that means they’ve increased the risk level of their investments and not gotten any extra return.

And high-risk assets are not what you want in your retirement account. Especially if you’re already depending on that money to survive.

That only leaves much more risky assets left for investors hoping to grow their money faster than a percent a year. And we’ve all seen what can happen when you’re only invested in stocks.

We just saw it. I mean, imagine if you’d spent your life saving and living on a tight budget so that you could retire in February 2020.

You scrimped and saved for 50 years to build up a retirement account that could support you through your golden years.

But you couldn’t depend on risk-free income from treasuries because those haven’t paid much since the last recession. And you certainly couldn’t put it in a bank. That 1% interest you earn each year doesn’t even keep up with average inflation of 2%.

So, you had it in “safe” stocks that had a history of paying and raising their dividends. You needed yield so you could generate income when you stopped working. And that was the only thing the government had left for you.

And then, a few weeks after you retired, before you could even start planning how to spend your hard-earned money, you saw 30% to 40% of your savings wiped out.

Then you heard that the government was going to ban dividends in its quest to “help the economy” and watched as your dividend stocks tanked even further.

Now, you’re still looking at a retirement that’ll last the same amount of time, but you’ve got to pay for it with about half the money you’d saved along the way.

And there’s no safe place to put what you have left that will even keep up with inflation. In a bank account or a treasury, you’re actually losing money each year because that money is worth 2% less thanks to inflation.

So, basically, you’re screwed. You’ve got to go back to work. And you’ve got to put that money you desperately need in order to survive into risky assets that might take another 50% ride down.

The Future Is Now

And good luck finding a job in the coming years. Research shows that about 50% of American jobs are automatable and that 32% of U.S workers will see their jobs disappear within the next decade.

Artificial intelligence and robotics have already made massive strides forward. With just a few more steps, many jobs we think of as requiring a human touch will be performed by computers.

I wish I had better news to share, but that’s the truth. There’s a war being played out and its end goal is to destroy the middle class that literally holds this country together.

We can’t stop it. We can’t fight it. All we can do is recognize it’s coming and make sure we’re positioned to benefit from it.

And to do that, you need to take two steps.

First, you’ve got to divest yourself of all those companies that are going to fall as the war against the middle class continues to rage.

And second, you’ve got to get that money invested into the companies that are going to dictate how the new world will be run.

It’s the ONLY way you can make sure that when the middle class dies, you continue to not just survive, but thrive.

It wouldn’t be fair of me to just leave you with those two vaguely defined steps, though. So, to help you along the way, my colleague and I have put together two reports.

One is a comprehensive list of what we’ve termed “high-hazard stocks.” These are the companies you need to avoid at all costs and get rid of if you own them. It’s also got all the criteria you’ll need to put any other investment through to make sure it’s not a ticking time bomb as well.

The second report includes all the details on the companies that will be driving the new world. These are the companies making the technology that’s going to replace human workers. And they’re the ones that have the potential to lift you up out of the middle class before it’s been destroyed by the war being waged against it.

Act Now, Before It’s Too Late

Just click here to get access, and you’ll be able to rest easy knowing that when they come for the rest of the middle class, they won’t be coming for you.

Then, armed with this knowledge and these two reports, you can make sure you’re one of the survivors when the fog of war has cleared.

You’ll find all the information you need and get access to both reports right here.

I urge you to act quickly, though, because I’m not sure how much longer we have left before the bell tolls.

Click here now, and protect yourself from the demise of the middle class.