This weekend could be your last opportunity to buy gold at a discounted price. That's because a looming conflict with North Korea and potential breakup of the EU is likely to drive precious metal prices higher as early as next week.

A military escalation between the United States and North Korea could add $100 per oz. to the price of gold within a week. We've seen gold prices rise time and time again during times of military conflict. But a military conflict with North Korea would set a new precedent for gold.

In the 42 years since it became legal for Americans to own gold again, the United States hasn't been in a major military conflict with another nuclear-armed nation. If America goes to war with North Korea, fears over attack would rapidly proliferate and skyrocket demand for safe haven assets like gold.

Now, let me say that I honestly don't see North Korea as any major threat to U.S. citizens, particularly concerning the country's ability to deliver nuclear weapons. I mean, just take a look at the production quality of its propaganda videos. Here's the most recent one:

They're all like this: on par with a novice video producer's project at a community college in the 1990s.

If the production quality of its propaganda videos is any indication of North Korea's ability to deliver nuclear weapon developments to the United States, it might get one here in 20 years. Nevertheless, the fear over an attack would almost instantly create demand for safe havens. And that's really why you should be a gold buyer now. (Editor's Note: Please see a recent article I wrote for Energy and Capital for more on buying gold for fear.)

But a war between the U.S. and North Korea is only half of what will be driving gold prices next week. On May 7th, two Sundays from today, the fate of the entire European Union may be decided.

This is the day French voters will go to the polls to elect a new president. The candidates now are Emmanuel Macron, a former investment banker and social liberal with pro-EU leanings, and Marine Le Pen, who studied law to advance France's National Front with anti-immigration and protectionist policies in the vein of Donald Trump.

Polls currently show Mr. Macron with a lead over his opponent. But election polls can be wrong, as we now know all too well. And with the recent attacks in Paris, the anti-immigration and anti-EU politics of Ms. Le Pen are increasing in popularity.

If Le Pen wins, she has promised to introduce a "Frexit" referendum within six months of taking office. This could be the end for the EU all together. France was one of its six founding members. And with a major economy, France is a pillar of the EU. Countries with smaller economies may decide to follow suit, ultimately leading to a complete EU breakup.

By the way, do you remember what happened to gold prices following the first Brexit referendum?

A looming war with North Korea and EU breakup on the line are strong enough catalysts to move gold prices much higher. But add to this fears concerning a U.S. government shutdown, and the argument for gold is compounded.

On Wednesday, Republicans approved a short-term spending plan that will keep the government open until May 5th.

I suspect kicking the can down the road for a week was simply a measure to avoid another negative headline while we're closing in on Trump's 100th day. But this indicates that partisan squabbling over issues like health care, Trump's border wall, and Planned Parenthood are still clearly raging and that an agreement on government spending is still far from mutual. In fact, here's a tweet from Trump yesterday: 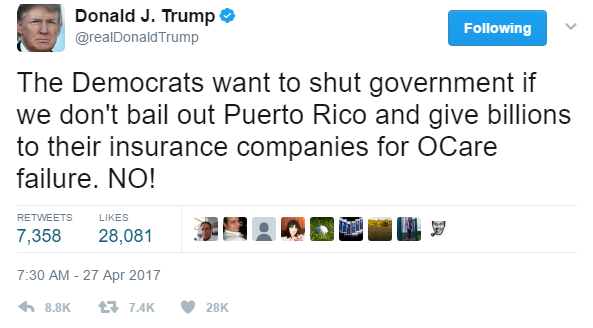 Global politics, government spending, and war will all be a part of next week's headlines. And they're all going to drive gold prices higher. This weekend will provide a great opportunity for gold purchases.