Is Recession Good for Gold?

It's been a disaster that's left investors with virtually nowhere to run.

But as it turns out, the global economic crisis may actually help boost gold prices in the end by stifling new production. Here's what I mean. . .

In early 2008, a sudden drop in consumer spending associated with the global recession caused gold demand for jewelry and industry to contract. These sectors are important to gold's supply/demand fundamentals, as they account for about 80% of total world gold demand.

Declining demand for jewelry and industry stalled a seven-year gold bull market in March 2008 — just as prices topped $1,000 an ounce for the first time. Subsequently, gold prices were pushed as far back as $700 an ounce seven months later.

But the gold market has since changed.

Falling demand from the jewelry and industrial sectors has been buoyed by a booming increase in gold investment demand.

Mounting investment demand bolstered gold prices over the summer. Last month, gold set a new record high for the average monthly price of $996.59 an ounce. That's about 3% higher than the previous record set in March 2008.

Investment demand is expected to continue to increase again by as much as 60% this year. And while this growing demand will continue to be met in part with recycled material and official sector sales, the bulk of the gold will have to come from mine production, or producer de-hedging. But there's a problem. . .

Gold miners are producing less and less gold every year.

In fact, total world gold production has steadily decreased about 7% since 2003. Take a look: 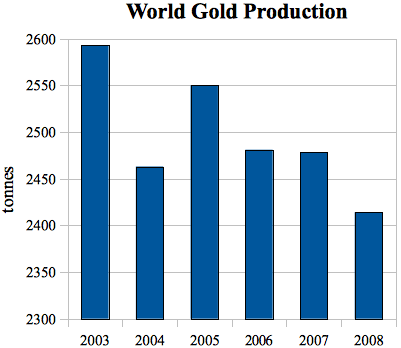 And the outlook for new gold production is also declining.

The End of the Exploration Boom?

Preliminary estimates indicate that marketwide exploration budgets for expenditures related to precious and base metals, diamonds, uranium, and some industrial minerals will plummet again this year by about 40%.

Junior mining companies are expected to account for the largest share of the overall decline — although most mid- and large-cap players have made deep cuts of their own in their 2009 exploration plans.

The overall cuts in exploration budgets will help to continue the trend of declining total world gold production. New gold projects must be explored, tested, and analyzed with great detail before any company can claim valid resources or reserves, which are very important tools in securing capital to develop a project into a producing mine.

Randgold Resources Ltd. (NASDAQ: GOLD) is one such company that says it will curb exploration spending, even though gold has risen to over $1,000 an ounce.

Rangold Resources CEO Mark Bristow said that the company was "done with acquisitions for the time being" at the Denver Gold Forum two weeks ago.

Volatility in the gold market and general market and economic uncertainty in the short- to mid-term make it very difficult to accurately forecast how exploration budgets will be affected going forward.

But we can be certain that marketwide exploration budget cuts will result in lower total world gold production. And in the midst of what might become the greatest gold rush of all-time, I expect falling mine supplies to help significantly boost gold prices in the future.

P.S. While gold's still the talk of the town. . . silver could be even better. In fact, I just finished a new report on one silver stock that increased an average of 852% every year for nine straight years! You can learn all about it. . . as well as another silver stock that could be poised for similar gains. You don't want to miss out on this one. Check it all out right here.