Welcome back to the Wall Street shenanigans.

I hope you all had a wonderful and much-needed holiday weekend.

One person who didn’t have such a good time was Paul Pelosi, Nancy Pelosi’s husband.

While Nancy accepted an honorary degree from Brown University and pontificated about social and political issues at the Ivy League’s graduation ceremony, Paul was doing a bit of boozing.

So much so that he got arrested for a DUI Saturday night in Napa, California.

Maybe he was upset his stocks have been slumping, or he’s wondering how long it’ll take for the SEC to investigate him for insider trading.

Either way, you know what they say...

He doesn’t have to worry, though, because it won’t really affect him.

He’ll just buy a lawyer and it’ll be ruled an unlawful traffic stop.

Merely a slap on the wrist.

Do you really think the husband of the speaker of the House of the United States is going to get in trouble for breaking the law?

Which brings me to the first hot trend this summer: insider trading.

As the market nosedived these last few weeks, one group of investors quietly purchased stock.

At the beginning of May, insiders were going down with the ship, so to speak, and didn’t show much signs of buying activity.

But that’s now changed in a big way, signaling a bottom for the market, at least for stocks that have heavy insider ownership.

The last week of May, insiders turned bullish, with the insider buying-to-selling ratio doubling to 0.95.

The ratio's commonly seen as a buy signal when it dips below 1 and then creeps back up. 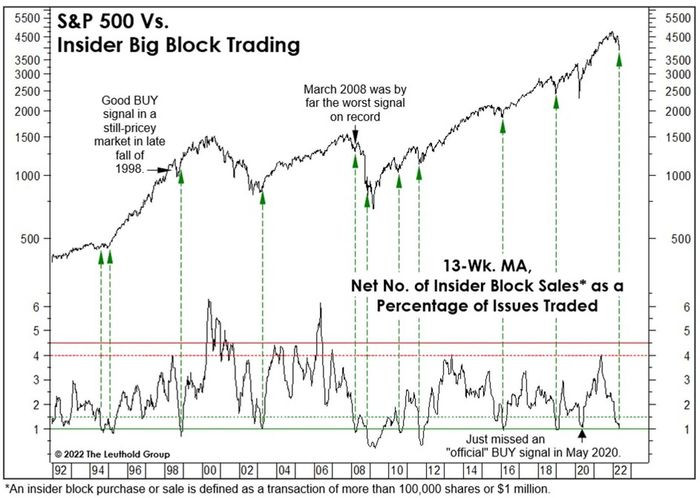 According to MarketWatch, the CIO of money manager Leuthold said, “In the last 30 years, maximum bullish readings on this indicator have been followed almost immediately by substantial market gains... We’re talking about an indicator that got you into the stock market at good moments on nine other occasions going back to the early 1990s — oh, and kept you out of the big bear market of 2000–2003 until right at the end. Not bad.”

So even as negativity continues to intensify from the mainstream media — GDP did shrink last quarter and tech companies are busy laying off employees — insiders aren’t fazed.

Amid all this turmoil, my model portfolio that tracks insider trading is in the green.

I track insider trades all day and night, giving you the most informed shot at riding the coattails of the Wall Street elite. Yes, those billionaires making all the big money moves behind the scenes.

If you want to know the most promising companies with heavy insider buying right now, check out my trading service right here.

So as insider buying heats up, the second trend this summer is the lack of energy storage to power the A/C on these hot days.

I wrote last week about the blackouts coming this summer across the U.S.

Essentially the entire country west of the Mississippi is at risk of severe blackouts in the coming months because our grid uses lithium-ion batteries, which can’t store the energy that we need to use this summer.

This is a big problem that will make it difficult for much of the U.S. to work and possibly eliminate the ability for people to use the A/C altogether, which admittedly is a luxury, but one that workplaces rely on.

And now it’s not just a domestic issue.

We’re hearing that rolling blackouts will hit much of the world, including Asia, Africa, and Europe.

India’s slated to lose $100 billion from the blackouts alone.

So the obvious solution is to store energy using batteries that don’t use lithium-ion tech.

Battery-makers are already on the case, and the replacement is a mixture called lithium iron phosphate (LFP).

You’re going to be hearing all about LFP soon if you haven’t already.

When battery-makers source phosphate to make the mixture, however, they’re going to find that 95% of the world’s phosphate deposits produce toxic, radioactive waste.

It obviously won’t fit into the new ESG principles for clean investing.

(Think Tesla, which now more than ever needs to bill itself as being environmentally friendly.)

Now, there are only a handful of clean phosphorous deposits in the world and even fewer companies that mine them.

But our mining and precious metals expert Luke Burgess has tracked one of those companies down, and he's giving away the pick in his latest investor presentation.

Nothing's a sure thing in this market, but I'm convinced Luke's on to something big here...