Don't Make This Mistake With Your Cannabis Stocks

Let me ask you a personal question.

If it comes off as overstepping, maybe getting a bit too intimate, then it's all the more important that you take the time to look inward and really do some soul searching.

When dealing with a sector as hot as the cannabis industry, this inquiry is absolutely fundamental to any serious investor — and this becomes more so the case each day.

The reason is simple. When the trend is this bullish, a lot of garbage can and does make it through even the most vigilant filters.

Companies with no future, but backed up by a lot of hype and unfounded excitement, get those venture capital dollars each and every day.

High On Itself: The Modern Cannabis Industry

Of course, viable cannabis companies are also on the receiving end of this effect, but with the entire industry still going strong, it's hard to separate the wheat from the chaff — or, in this case, the seeds and sticks, from the bud (sorry, couldn't resist).

Let me illustrate exactly how removed from reality the average cannabis investor is with two simple charts.

Below, you will see growth figures for the recreational and medicinal prongs of the legal cannabis industry.

Though the later years of this chart are obviously projected, the overall pattern has already been established — and it's impressive, to say the least.

A 31% annual growth rate is nothing to sneeze at, no matter who you are or what business you're engaged in. 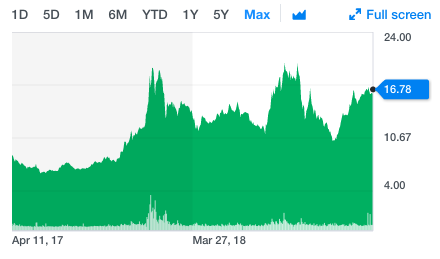 In the last two years, this ETF has more than doubled, and, when looking at lows versus highs, managed to triple in just the first eight months of trading.

Making matters even more confusing, there have been two major corrections during this schizophrenic timeline, which cost some of the more unfortunate shareholders more than 40% of their investment.

All of this goes to show that cannabis stocks are highly over-bought, at times over-sold, and at every step of the way, a poor reflection of the sector's realities.

So if my initial question made you a bit insecure, there's good reason behind it. Many, if not most cannabis investors are not choosing their stocks properly.

More often than not, instead of making measured, sober investments, they find an early-stage company that's got one magical product in the works — usually some sort of cannabis-derived pharmaceutical potion that promises to cure Alzheimer’s, Parkinson's, or some other terrifying disease — and proceed to brag to their friends that they'll be retired within 12 months.

They neglect to consider the realities of the long and uncertain FDA approval process, the state of the company's treasury and its burn rates, even the viability of the underlying technology itself.

In the end, it's this sort of investment that contributes to the massive corrections you saw in the second chart above.

And it's the reason why these stocks aren't so much investments as they are very expensive lottery tickets.

That's not investing. That's gambling... And if that's what you're doing, then you're right to be insecure.

What you should be looking for, as an investor, isn't going to be as exciting as a cure for cancer or a topical spray that makes depression and anxiety a thing of the past after a single treatment.

If Warren Buffett Were To Buy A Cannabis Company... What Would It Be?

It's going to be a company that exhibits the same characteristics as any other measured, sober investment in any other industry.

It's going to be well diversified, with its hands in multiple product lines, exploiting multiple business models.

The company is going to own real assets, like land and facilities, and will have a clear and defined go-to-market strategy across all of these product classes and all of its business models.

This company will not have its entire future hinged on a single FDA approval, but, rather, have revenue streams coming in from a variety of sources.

At the end of the day, this is a company that will look at cannabis the same way that a company like Google or Facebook looks at the internet: a means to an end, to be utilized in as many ways as possible.

Such companies do exist, and long after the cannabis valuation craze settles down and starts to look more like the actual growth chart (something which many experts say is already long overdue), these companies will rise to become the multi-billion dollar corporate giants.

But because quantifiable metrics are still predicting 31% annual growth for the coming years, you will see strong yet sustainable returns well into the next decade.

The job of the smart, forward-thinking investor is to find tomorrow's giant, while it's just getting started.

Taking into account all of these realities of the volatile cannabis industry, and the well established truths of investing as a whole, I've scoured the industry for just such a gem.

And I believe I've found it.

It's a company with interests and assets in multiple countries, multiple products in the pipeline, multiple revenue streams already established, and on the cusp of profitability.

There is a defined go-to-market strategy with everything this company does, from its most conservative of operations, all the way to its most aggressive.

Its chance of failure is virtually zero. At the very worst, this company will simply track the projected growth of the sector. In all likelihood, it will beat these growth rates as it rises to take its place among the industry giants.

The company is valued at less than $50 million today, but trades actively on two major North American exchanges, and could well be a 10x gainer before the end of 2020.

So, if you were looking for that magic-bullet company, with the single idea and single, theoretical world-changing product, I apologize.

I don't deal in lottery tickets.

If you're looking for real gains, supported by time-tested business practices and turbo-charged by one of the strongest industrial trends in modern history, however, this is it.

Check out my in-depth research report on this company, right here.