Cannabis stocks have been on fire lately. And with Canadian legalization just in effect, we’re sure to see even more interest from new investors.

But some of these stocks are WAY overpriced right now. And folks who buy into the hype are likely to get burned when reality sets in.

It’s really been the major growers that have gotten the most attention. Tilray is the obvious candidate. It blew up out of the starting gate and soared to a value over $20 billion at one point.

It’s fallen back down. And a big part of that rally was fueled by short sellers being forced to buy and cover positions.

But it’s still massively expensive compared to the revenue it generates. Even compared to its potential sales, perfection has been priced into this stock. If we get anything but, it could lose half its value.

But Tilray hasn’t been alone in the frenzy of buying. The other major growers — Aphria, Aurora, Canopy, and Cronos — have all enjoyed massive spikes in interest in share price.

But the thing is that they’re all providing the same thing: cannabis. Granted, they have other segments to refine it and turn it into other products, too. But essentially, they’re growers. And they’ve got capacity to grow a lot...

There’s Too Much Weed, Man…

If you add up all the capacity these five companies have right now, you’re talking about a massive amount — over half a million kilograms a year, to be precise.

But all five of them have big expansion plans going. And they all plan to be finished by 2019.

If all five complete their construction and operate at full capacity, they’ll be able to supply over a million kilos of sticky icky to markets all over the world. 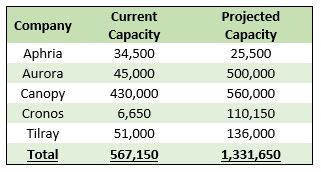 And that’s got investors really excited. Why wouldn’t it? That’s a ton of grass. Actually, it’s 1,331 tons of grass.

And depending on the price, that’s a whole lot of money.

But it’s only money if you can sell it. And you can only sell it if people want to buy it.

Now, I’m not saying people aren’t going to buy a lot of Canadian cannabis. But even the biggest projections for global demand in 2021 — two years after these guys finish expanding — are around 500,000 kilograms a year. The low end is more like 200,000 kilos.

That’s a pretty big difference from a million plus.

At the low end, we’re talking about an oversupply of about 830,000 kg. At the high end, it’s over a million kilograms of high-grade marijuana going unsmoked and, more importantly for investors, unsold.

So, these growers are spending a lot of money to be able to grow a lot of weed that might never get sold. That’s not a solid return on your capex investment.

And when that reality sets in, these high-flying growers may just take a nosedive back to reality.

But there are still ways to profit from cannabis without depending on the price of a gram and who wants to buy how much.

And my colleague Briton Ryle and I have identified several that our readers are already writing in to brag about...

Cannabis Without the Pot

I know it sounds odd to say we’re invested in cannabis but not marijuana. But that’s exactly what we’re doing.

Brit and I are fans of companies that benefit from the growth of an industry or the popularity of a new product. But we prefer to invest in companies that make money no matter how many of the products sell or how long the growth lasts in that industry.

And with cannabis, we wanted our investments to be no different.

So we went on the hunt for companies that were going to be critical to the cannabis industry. But we also made sure those companies weren’t dependent on the cost of the products.

And we found four companies that fit the mold perfectly.

They all provide something critical to the cannabis industry. And absolutely none of them grow, process, or sell cannabis.

One of them supplies everything you need to grow marijuana except for the water and the space. Another works with farmers to increase harvests and encourage better land stewardship. A third helps dispensaries make sure the products they're selling are of the highest quality.

But it’s the last one that’s the real gem of our cannabis portfolio. It’s spinning off so much profit that we’ve taken to calling it the “reefer royalties” play.

And that’s because we’re literally collecting cold, hard cash. And we’re watching our shares increase in value at the same time.

We’re getting paid to win. And we’re not even working that hard. It’s like being Tom Brady’s backup.

And again, this company provides a resource that the industry can’t function without. But it doesn’t grow, process, or sell cannabis in any way, shape, or form.

Without the resources it provides, the entire industry would crumble, though. AND it guarantees steady cash payments as long as you want to collect them.

What could possibly be better?

The Greatest Cannabis Investment Ever?

When Brit and I uncovered this investment, we were pretty excited, to say the least. Nobody thought a company like this existed in the marijuana industry at the time. Not many people know about it even now.

So we shared it with the founder of our company. This guy knows a good investment when he hears about one. And he was even more excited than us about this one.

Usually, when we do a report or a presentation to tell you about a new investment we’ve uncovered, one of the editors who found the investment will do the work and “star” in the presentation.

But this time, our founder was so excited about the company that he asked Brit and I if he could tell the world about it. Now, I don’t know about you, but I didn’t get this far in life by telling my boss “no” when he asks for something like that.

So we wisely deferred to Angel Publishing’s founder, Brian Hicks, and let him take care of breaking down the incredible opportunity we discovered.

Honestly, it doesn’t matter to me how you hear about it or who tells you. All that matters is that you learn how to get in on this amazing investment before it takes off like the growers already have and the profits are all gone.

So, do me a favor — heck, do yourself a favor — and take some time to watch the presentation Brian put together. Or, if you’d prefer to read about it at your leisure, you can get his report by clicking this link.

Just don’t take too long to learn how to get involved. Because anything this good won’t stay a secret for long.

And when the investors sending the growers flying turn their money this direction, the price is going to go through the roof. And you’ll have missed out on the biggest part of the profits.

Don’t get burned buying the growers. Learn where the real smart money is investing in cannabis.

Because the next big run could be tomorrow.