A veteran geologist just told me one of his biggest and most recent industry secrets.

He tipped me off to a specific area in South America, where some of the world's top mining insiders were aggressively (but very quietly) staking and buying uranium exploration property.

It's an all-but-forgotten area in the dry deserts of Argentina's Rio Negro Province. And it's here where new exploration technology is revealing what some geologists believe could be the single largest uranium discovery in history.

But who cares about uranium right now?

That's because, even in the wake of the Fukushima nuclear accidents — which have smothered uranium prices and related stocks — the ever-widening gap between global uranium supplies and demand will continue to influence the market. And despite bearish overkill in the market, uranium prices will rebound and the nuclear industry will recover.

That means, for level-headed and well-informed investors, this could be the single best opportunity to enter the uranium investment space in the past 10 years...

For the moment, the radiation leaking from Fukushima has poisoned the uranium market.

The price of uranium oxide (U3O8), the most commonly traded form of the energy metal, plummeted over 30% to ~$50/pound in the spot market immediately following the Tōhoku earthquake and tsunami.

Since then, the spot price has recovered a bit; but it still remains 21% lower than it was right before the Fukushima disaster. 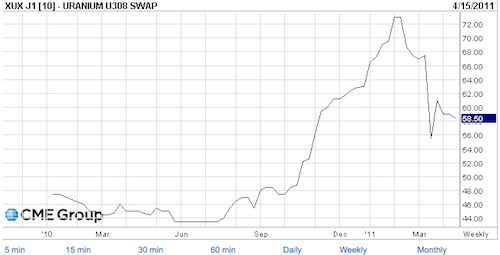 As a result, uranium companies involved in all aspects of the industry — from exploration to production and processing — have suffered serious market devaluations.

In just the past six weeks:

Investors rapidly sold off their positions out of fear that the Fukushima disaster will force governments to tighten industry restrictions, or worse, abandon their pursuit of nuclear power as an alternative energy source all together...

But the knee-jerk reaction in the uranium market has been grossly overdone.

The truth is the Fukushima disaster does not fundamentally alter the global demand for uranium oxide.

There are still over 440 nuclear power generating facilities around the world that will continue to be just as hungry for the nuclear fuel as ever. 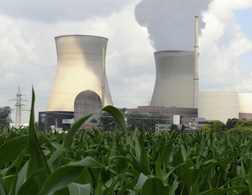 Moreover, it is foolish to think that the world's governments, financial institutions, and major corporations — all of which have trillions of dollars sunk into the nuclear sector — would let the industry fall so easily.

So there's no doubt in my mind that nuclear industry will soon rapidly recover.

You know as well as I do that people have very short memories... BP didn't stop producing oil from the Gulf of Mexico after the oil spill last summer. In fact, it only took a few weeks before the government issued new drilling permits.

The Fukushima disaster is the same sort of situation.

These moves should help alleviate most of the mainstream fears and quiet any loud, uninformed voices. Then the masses can go back to paying attention to Charlie Sheen or whoever the "Sheen-of-the-week" is.

The bottom line is this: The uranium market will survive the Fukushima catastrophe. And once the fear and emotion settles down, I expect uranium prices to rebound from their current lows to their pre-Japan crisis highs of over $70 per pound.

As for uranium stocks, current share prices are completely divorced from underlying fundamentals.

Once the noise in the market created by the Japanese catastrophe is gone, shares of uranium companies will rapidly play catch-up.

That's why, for the past six weeks, I've been scrambling to position my portfolios to take advantage to of a rebound in the market. I've put some of my money into the large uranium production stocks like Cameco (NYSE: CCJ) and Uranerz Energy (AMEX: URZ). I expect these companies to return a decent profit.

As I mentioned earlier, a veteran geologist recently told me about a rapidly developing uranium district in Argentina's Rio Negro Province, where property was being snapped up by major names in the mining industry.

It turns out experts recently discovered this region is geologically similar to other regions known to host world-class uranium deposits. That means there could be billions of dollars in untapped uranium reserves waiting to be discovered...

And since the whole story has been kept such a secret, most of the prime exploration land has staked by just a small handful of companies.

In fact, one small exploration company was able to get their hands on a massive 1.2 million acres of prime uranium property. This $0.25 stock was worth over $1.00 before the Fukushima disaster; once the fanaticism dies down, I expect share prices to strongly rebound.

That's why, for the past six weeks, I've raced to put together a new video report that details this small uranium exploration company. In this video, I give you the whole story, including more details on the Argentinean uranium region and exactly why I'm so excited about this opportunity.

The tragedy in Japan — and subsequent fear in the market — has presented us with an incredible opportunity to take a position in the uranium market.

The Wall Street investment houses and financial institutions are still under pressure not to own uranium assets. But the growth prospects for nuclear power continue to remain strong, as do the prospects for its yellow cake fuel...

Sooner or later, the money that was taken out of the uranium industry will be put back in.

That makes right now one of the single best times to invest in uranium.

There are plenty of great opportunities in the market now for investors to buy uranium stocks. But some are better than others.