Commodities are Poised to Head Higher

The Global Tide is Turning

Having lived through the 70s, it's hard to look back on those days without having a good chuckle...

What with disco, bell bottoms, and all of that hair, the “me decade” seems kind of comical compared to what followed it.

But one thing that definitely wasn't groovy back then was the misery index. Talk about a bummer.

Created by economist Arthur Okun, the misery index was calculated by adding the unemployment rate to the inflation rate.

Naturally, the higher the number turned out to be, the greater the level of misery.

But as it turned out, the misery index wasn't just some tool used by economists to put a hard number on the suffering; in the hands of James Earl Carter, it actually became a ticket to the White House.

During the presidential campaign of 1976, Candidate Carter made frequent references to the misery index, stating that no man responsible for a misery index that high had a right to even ask to be president.

Of course, Carter was referring to President Gerald Ford, who presided over an economy with a score of almost 14% during the campaign. (In May of that year, the inflation rate was 6.2%, while unemployment rate stood at 7.40%.)

The rest, as they say, is history — and as history provided the crack, Carter waltzed right through it.

But by the election of 1980, Carter's own words turned on him as he lost in a landslide to Ronald Reagan. Under Carter, the misery index had reached an all-time high of 21.98%, giving a whole new meaning to the word malaise.

Some 34 years later, history might be on the verge of repeating itself again because of higher commodity prices.

Because with the unemployment rate stuck seemingly in the 9%-10% range, and the Fed working overtime to create inflation, the misery index is on the cusp of a comeback in the familiar form of stagflation.

Stagflation, of course, is the worst-case scenario. In short, it's a period during which the economy stumbles and inflation soars.

And while the deflation camp continues to argue that soft aggregate demand in developed economies will keep inflation at bay, I'm not sure they can fight against the tide of devalued currencies and the growing commodities demand spurred by emerging markets...

On the verge of decoupling?

While the developed economies are still spinning their wheels, countries like China, India, and Brazil are stepping on the gas.

Unhampered by exploding asset bubbles and massive sovereign debt problems, these emerging markets are flush with cash and ready to lead the world economy.

In fact while the U.S economy is only projected to grow by a paltry 1.9% in 2011, GDP growth in emerging markets is expected to be more than twice that with developing economies growing by 4.6%.

What's more, as emerging countries continue to expand, analysts now believe these economies will make up 49% of global GDP by 2020, and 59% by 2030. That's a dramatic leap, given they only account for 37% of global GDP today...

That's the demand push that will ultimately lead to inflation at home as millions of people in other countries make the jump to the middle class.

It's the consumerism in other nations that will help push the markets into what I believe will be the second leg of the commodities bull market.

Higher prices will be the result, as the new/old scramble for resources gathers steam again.

That's already being reflected in the Reuters CRB Commodity Index, as the price for everything from copper to wheat and oil goes up in price due (in no small part) to increasing emerging market demand. 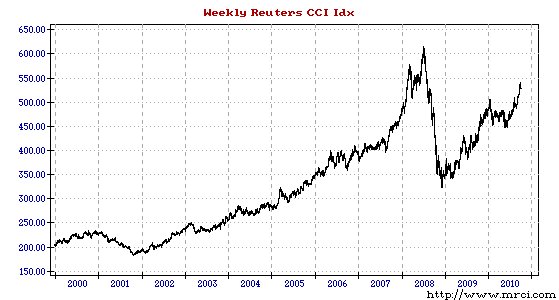 And then there's the role of the Federal Reserve — which seems hell-bent on debasing the dollar.

It's no secret that Ben Bernanke and Co. are trying to stamp out deflation forever. Here’s what the Fed had to say about it on September 21, sparking the late-month rally:

The Committee will continue to monitor the economic outlook and financial developments and is prepared to provide additional accommodation if needed to support the economic recovery and to return inflation, over time, to levels consistent with its mandate.

And while that may sound like a bunch of Fed gobbledygook, never has so much been said in so few words.

The translation is still pretty simple: The risk trade is back on again as QE2 waits in the wings.

This means that all prices — especially in metals and other commodities — will rise as we have seen over the course of the last six weeks.

The ultimate result will be inflation in all the things we need. And when it begins, it will be hard to contain in the short term — sort of like a bad 70s rerun.

For investors, that means increasing emerging market exposure on weakness while concentrating in those areas that benefit from a weak dollar, ie. commodities.

One way to ride this rising tide is in palladium. And as metals guru Luke Burgess points out in this report, palladium is likely headed much higher.

After all, as I've pointed out before, 1.3 billion Chinese just can't be stopped. Neither can the Fed.

So crank up The Doors and grab a seat on the magic bus...

The misery index could be making a comeback.