Nearly a month ago, on June 30, I wrote an article for Wealth Daily readers titled "The Inflation Lie."

Because when the chairman of the Federal Reserve keeps insisting that the price hikes we’ve been seeing are “transitory,” he is, at best, telling us a half-truth. Powell might be right that the price spikes for commodities will level off as supply chains get fully repaired, thus balancing supply and demand better.

But there’s one area where there’s not a chance in hell that prices will back off. Powell knows full well that once prices at the grocery store go up, they’re not coming back down. I’m not real big on pointing fingers and calling people liars. But the Fed chair is not telling the whole truth.

Now, to demonstrate the inflation lie, I used the price of Oreo cookies. A year ago, a package of Oreos was $3.50. Last I checked a month ago, a package was $5.97. The price has nearly doubled in a year...

This is a prime example of how inflation works. You can look at it as simply higher prices. Or, you could see it for what it truly is: The U.S. dollar has just lost purchasing power. It has lost value.

So over the weekend, The Wall Street Journal ran an article discussing price inflation for consumer products. Check out the headline: 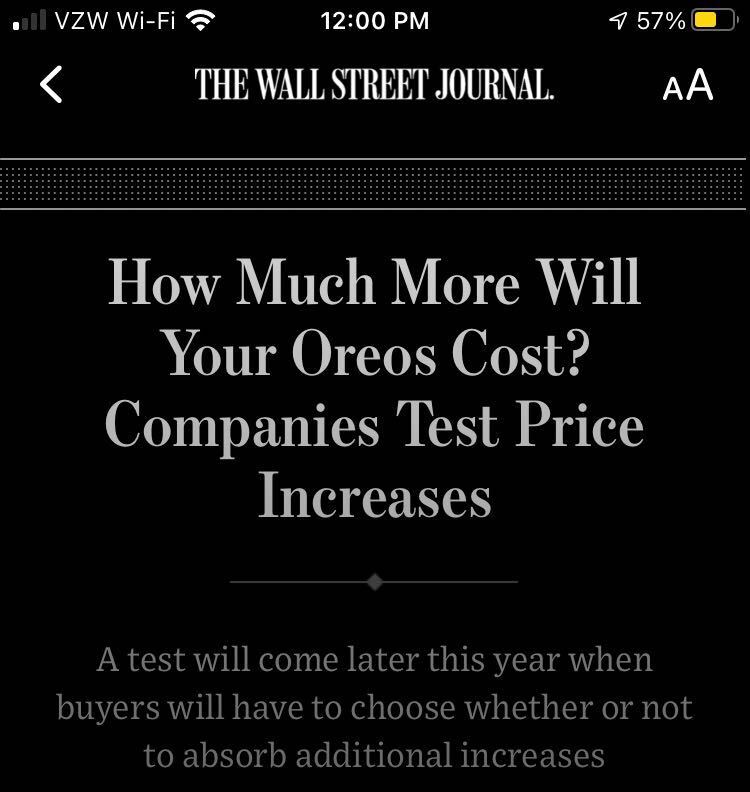 That’s right. One of the world’s most important financial publications had the same idea as I did. It appears that Wealth Daily is a primary source for The Wall Street Journal...

A Wall of Worry

Last Monday, as the Dow Jones Industrial Average was getting hammered for as much as 900 points, I published an article titled "Everything Is Down." In it, I discussed the possibility that the market was starting a more serious sell-off.

It’s been said that the stock market’s primary function is to make investors look foolish. The joke was definitely on me — last Monday’s drop marked the low for the week. By Friday, the Dow was hitting new all-time highs.

There’s another old Wall Street saying, something about a bull market will always climb a wall of worry. That is to say, prices will rally even in the face of bad news. And these days, the laundry list of bad news is long.

Right at the top of the list sits inflation and interest rates. Stocks have run to current levels because interest rates are basically at zero and the Fed is buying $120 billion of bonds every month.

Investors are acting like the Fed will never change its policy stance, never raise rates, and never stop with the QE bond purchases. Of course, that’s ridiculous. The Fed’s rhetoric has been softening about the QE purchases, and it’s highly likely that the Fed will announce a timetable for tapering its bond buying at its annual Jackson Hole meetings, which take place this week.

When Yellen started to taper QE back in 2018, the market dropped 20% in two months. There’s no reason to think it will be different this time around. And it could be worse. Because that wall of worry has me, well, worried…

If there was ever a thought that China would moderate its policies to protect the economic interests of Chinese companies, well, such a notion should be abandoned. A couple weeks ago, China started really cracking down on its own companies.

To make a long story short, there will not be any more Chinese companies going public in the U.S. And it’s possible that some Chinese stocks listed in the U.S. will get delisted and moved to the Hong Kong market.

Plus, so-called “high-level” meetings over the weekend between China and the U.S. to smooth over tensions did not go well. And I’m not surprised. For the last six months or so, China has repeatedly called the U.S. a bully and said that the U.S. does not have the right to tell other countries what to do.

This is not “woe is me” sympathy-grabbing by China. This is a direct challenge and a direct threat. We can expect China to start seeking allies to stand against the U.S. China’s already pretty cozy with Iran and North Korea.

Earnings may never be as good as they are right now. When you know the news isn’t going to get better, that's often a good time to take some profits.

COVID-related deaths here in the U.S. have returned to nearly peak levels. That is not good, and I’m surprised people aren’t worried that new restrictions are coming. The last thing we need right now is something that weighs on job creation and economic activity.

And there’s the Fed…