Written by Christian DeHaemer
Posted May 9, 2013

Ever hold a gold bar?

I did once in South Africa, after visiting Durban Deep...

They let your humble editor enter a steel cage with a single gold bar lying on a wooden table. There was man with a serious mug and a pistol on his hip to let us know we couldn't run off with it (and believe me, that's the first thing you think of).

I hefted this large gold bar — I think it was 68 pounds — that looked like the kind you remember from the Goldfinger movie. Someone took a picture.

The thing that strikes you most about gold is how much it weighs compared to something like lead. I haven't before or since held anything like it. It is a bit unworldly and defiantly very cool.

Gold has been a storehouse of value for as long as it's been around. All people of all nationalities and cultures like it and want to own it. Gold is shiny and easy to work into art or jewelry. It is a symbol of status and wealth.

Most importantly, it is rare. All of the gold dug up out of the ground (155,000 metric tons) in the history of time can fit into two Olympic-sized swimming pools.

And gold maintains its value through the ages. They say an ounce of gold would have afforded an important ancient Roman a nice toga... at $1,463 an ounce, it would still buy you an impressive suit.

Perhaps this is why the Chinese are buying gold hand over fist.

In March, Chinese imports of gold more than doubled to an all-time high. The only people who buy more gold are Indians.

Net gold flows from Hong Kong to China, the world's No. 2 gold consumer after India, jumped to 223.519 tonnes in March from 97.106 tonnes in February, smashing a previous record of 114.372 tonnes in December. That makes up more than half of record gold exports to China from Hong Kong in 2012, which stood at 557.478 tonnes.

In March, Shanghai gold futures fetched premiums of more than $30 to global prices, making it cheaper to buy the metal overseas.

April could see imports swell further after the drop in international prices spurred frenzied buying in Asia, leading to a shortage of gold bars and coins in Singapore as well as Hong Kong, which is China's main source for gold imports.

And that's just the reported numbers.

It is a well-known secret that the Chinese and Indians smuggle vast amounts of gold into their country, and it's estimated that black market gold imports dwarf the legal kind.

Why does China want to hold so much gold? Well, for a number of reasons...

I'll give you two.

The Chinese investor has lived through turbulent times. Mao's Great Leap Forward, a cultural and economic movement that killed upwards of 32 million Chinese, is still within living memory. And numbers coming out of China lately point to an economy heading into a slowdown: Official GDP was 7.7% (expected 8.0), but the Producer Price Index showed prices fell 1.9% in March and electricity rates point to a real GDP that is much lower.

The history of currency failure is long from Athens in 404 BC to Athens today...

Gold may increase or decrease against the value of the dollar — or yuan — but it will always be worth something long after the next bumbling central banker destroys today's paper. 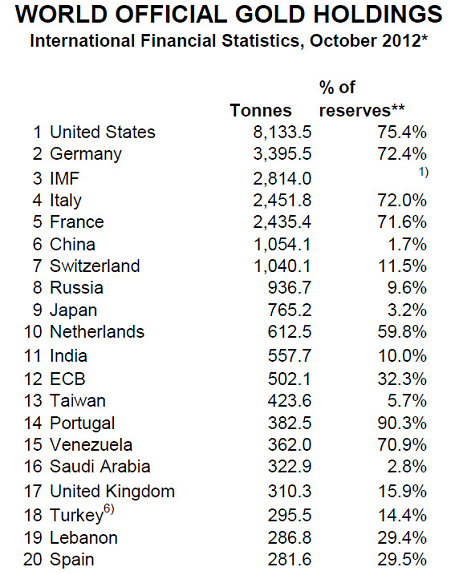 The second reason China wants gold is that it sees itself as a dominant player on the global stage.

China wants the yuan, or RMB, to be the equal of the dollar, euro, or yen.

But the Middle Kingdom has a problem...

They don't have enough gold to back their currency.

To be a player, the People's Bank of China will have to acquire a lot more gold.

For these reasons and more, there will be a floor in the price of gold for the foreseeable future.