China Buys 47% of the World's Gold

Rampant inflation is driving Chinese consumers to buy gold on a massive scale...

In fact China is already set to buy almost half of all the gold that'll be mined this year.

You read that right: The Chinese may buy nearly 50% of total world gold production in 2011.

This incredible demand will no doubt put significant strain on global supplies.

Today I want to talk about how this soaring demand may be the catalyst that pushes gold prices over the $1,500 level in as little as a few weeks.

China's rising inflation stems from the $585 billion economic stimulus package its leaders pushed through in the depths of the financial crisis two years ago.

In dollar terms, China's stimulus was much smaller than the $800 billion package the U.S. created. But it was much larger as a percentage of the nation's GDP...

And now, all of that money sloshing around the Chinese economy has driven inflation rates to nearly 5%.

The Chinese government has already made some big moves to keep domestic inflation from spiraling out of control:

So far, none of these measures have managed to curb inflation. Fears of uncontrollable inflation — even hyperinflation — are quickly circulating throughout the Chinese economy.

This has prompted a rapidly growing number of China’s 1.3 billion citizens to start devouring gold as wealth protection.

Panic in the East

According to the gold-specializing Swiss Bank UBS, Chinese gold demand exceeded 7.05 million ounces in the first two months of 2011 alone.

This incredible demand is equal to roughly 47% of all the gold produced during the same two months!

The Chinese are buying nearly half of all the gold that is being produced worldwide.

Extrapolated over the full year, Chinese consumers could be in line to buy over 42.3 million ounces of gold just this year.

Let me put that into perspective for you. That's more gold than is being officially stored as reserves by China's Central Bank... 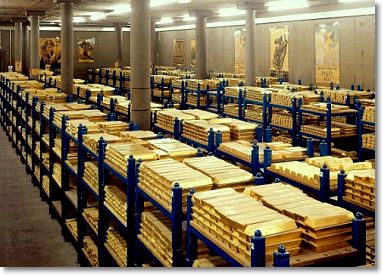 The Financial Times recently quoted a senior executive at the Industrial and Commercial Bank of China ICBC, who spoke of the “voracious” appetite for gold in China...

Zhou also said there was heavy demand for silver, with ICBC selling about 13 tonnes of physical silver in January alone, compared with 33 tonnes in the whole of 2010.

The demand for gold in China is exploding before our eyes. It seems that demand by individuals is reaching almost frightening levels.

And none of this includes what the country's Central Bank may be squirreling away...

We know that China has been buying on gold price dips. Various officials have confirmed this in the past, although we have no idea of the volumes involved.

The People’s Bank of China is almost certainly continuing to diversify their massive $3 trillion currency reserve into gold and precious metals in order to protect themselves from their large exposure to the weakening U.S. dollar.

We also know that China has been accumulating gold surreptitiously through buying up domestic production.

This suggests that increasing gold production was part of a long-term strategic plan to become a global leader in gold investments among governments.

The World Gold Council even reported:

Some market participants believe that China may also be continuing to buy local mine production, which it has done regularly in the past. There is certainly no shortage of experts, both domestic and from overseas, advising China to do so.

But even in the short term, the expected demand for gold in China over the coming month will be enough to put significant strain on global supplies.

I expect this heavy demand to help push precious metal prices to record highs in 2011.

Any price dip should be seen as a buying opportunity.