China Back to Growth

Best Performing Market This Year Is...

The good old US of A is in a bind.

It's looking as if it no longer works like it used to. America just can't get it done.

The official 2012 Congressional calendar shows the 112th Congress, 2nd session will end on December 14 — though we could run into overtime right up to the end of the year.

Make no mistake; time is running out.

The political class is lining up on the extremes. A tax agreement is far away.

A failure to compromise will lead to a new downgrade on U.S. debt. The market didn't care last time the S&P rating agency dropped its grade for America, but it might when it's joined by Moody's and Fitch. That would be bad for stock investors.

On top of all this, there are some concerning new data points...

Yesterday our friends at the Institute of Supply Management told us its Purchasing Managers' Index fell to 49.5 last month from 51.7 in October. The market was expecting a slight drop to 51.

The ISM tells us numbers below 50 indicate a shrinking economic environment... If it goes on long enough, we start to call it a recession.

The ISM number is the lowest since July 2009 and the biggest miss in five months. That's not good.

Barclays Capital trimmed its fourth-quarter target to 1.8% from 2.2%. CIBC World Markets chopped its estimate to 1.2% from 1.8%. And RBC Capital Markets dropped its forecast for growth to 0.2% from 1%. Other firms that reduced their estimates include Morgan Stanley, Goldman Sachs and Macroeconomic Advisers. The MarketWatch consensus forecast of economists estimates GDP will grow 1.1%, down from a prior estimate 1.5%.

If the professional liars of Wall Street are downgrading the market heading into their year-end bonus payout — we must really be in trouble.

And don't expect the Fed to save us this time.

Bernanke recently gave his annual address to Congress. He basically shrugged and said, “What're you gonna do?”

Bernanke told members of Congress that recent economic data points “suggest further weakness ahead,” and that the Federal Reserve is projecting the U.S. unemployment rate will remain at 7% or above all the way through the end of 2014.

He went on to say, “I don't think the Fed has the tools to offset the fiscal cliff.”

This comes after Bernanke announced over the summer that he would keep interest rates low until unemployment went down... and buy $45 billion in mortgage-backed securities every month until the economy improved.

On the plus side, Bernanke's target has been a housing recovery. Housing contracts were up 13% over last year and 5% sequentially.

Don't fight the Fed here: Buying a house would be a logical investment strategy given low rates, low housing prices, and a pervasive bearishness by the mob in that sector. Nick Hodge has been all over this story.

The U.S. economy is a mixed bag at best. It is time to look for investment opportunities elsewhere...

Like a boulder falling on a trampoline, the time to buy stocks is at the moment of maximum inflection. Look at beaten-down, ultra-cheap environments where most speculators are afraid to go.

For example, the best-performing stock market this year has been Venezuela. It's up 228% YTD in the hopes that President-for-Life Chavez will die. The second best is Egypt, which went up 55% in the aftermath of the Muslim revolution.

China Back to Growth

Perhaps you don't want to go that extreme. You want blood in the streets — just not that much...

Let's check out the second largest economy on the planet, China.

The Chinese market has been beaten like a lazy whelp. The Shanghai 180 Index has fallen from a high near 13,000 five years ago to 4,600 today. It is getting very close to buy range, if it's not there already.

The common investment story is that corruption has fueled massive misallocation of funds. There are modern ghost towns in the desert and factories that make footwear no one wants.

That is all true, but there is good news as well: China is now in expansion mode.

The official Purchasing Manager’s Index (PMI) rose to its highest level since July, reaching 50.2 in October — a marked improvement from September’s figure. As we learned above, anything over 50 is expanding.

I've been digging through some Chinese companies, looking for the diamonds in the rough.

This one flashed up on my screen: 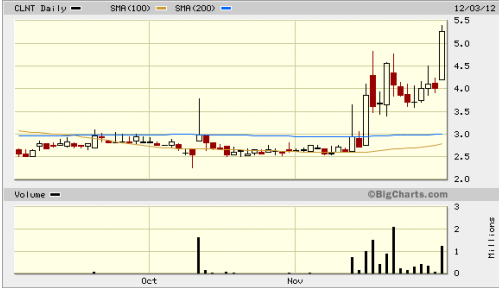 Cleantech Solutions (CLNT) is a China-based manufacturer of metal components and assemblies primarily used in the wind power, solar, and other clean technology industries.

After the multi-year beat down, Chinese stocks are extremely cheap. CLNT has a trailing P/E of just 2.94 and a price to book of 0.14.

There are a number of these out there.

And if our political leaders don't get their acts together, we will see these types of values in U.S. stocks as well.