How to Stay Flush with Cash During the Next Recession

I was watching one of the financial news networks on Wednesday after the markets took a brutal beating. Obviously, that was all anyone was talking about. The Dow dropped almost 500 points, and the S&P was headed for its worst slide since late August.

Writing that makes me laugh a little. Late August wasn’t that long ago. But I guess saying “the worst slide in about a month” just doesn’t have the same ring to it. But I digress.

What I really wanted to talk about was another piece of the conversation. The show I was watching had a panel of experts. And the host was asking them two things.

First, he was asking why none of them had told him on Tuesday that the markets would fall further on Wednesday. He actually seemed angry with them, too. Nobody had a real answer except that you can’t time markets and none of them are clairvoyant.

But the host saved himself with his next question. It wasn’t anywhere near as ridiculous. He wanted to know, if this really were the start to a recession, how they would be positioning their investments.

And the answers were all the same. First, the expert panel pointed out that if this is the beginning of a recession, you needed to make your adjustments several months ago. But second, they almost unanimously agreed that, as long-term investors, there weren’t many changes they needed to make.

A House Built on Rock

Good investors are a lot like builders erecting a monument.

They know they can try to get everything done in a short amount of time. But they also know that without a solid foundation and careful construction, everything will collapse under even the slightest pressure.

That’s why good builders carefully plan their projects. It’s why they dig down to solid ground to lay the foundations. And it’s why they only use the best materials available.

And that’s the same way a good investor builds a portfolio. Traders hop in and out of positions. Investors start with the best companies and build on those strong foundations for decades.

And one thing all investors should be looking for — recession or not — is companies that spin profits out to shareholders. Those can be dividends paid in cash or in more stock. Or they can come in the form of stock buybacks.

Either way, the best investments for long-term profits pay their shareholders and give steady raises.

Take Walmart as an example. Between 2005 and 2010, shares barely broke even, finishing the five-year span with a 1.2% gain. Now, considering that five years includes the Great Recession, that’s not terrible.

But just look at that dividend. It never stopped growing. The company even gave shareholders a raise during the depths of the market sell-off. And you can bet that extra cash was a welcome gift during those scary times. 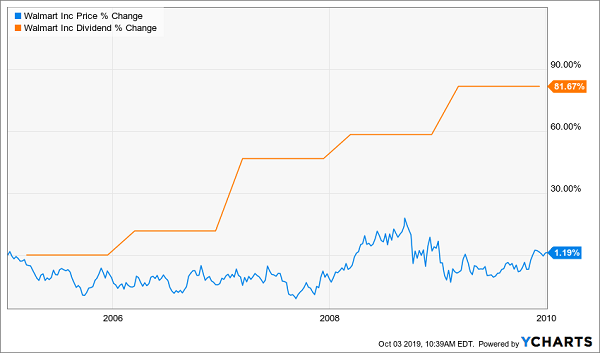 And there are a lot of other companies out there that spread the wealth around. The past five years have been especially rewarding to shareholders as companies stepped up buybacks and dividend payments.

And while those companies might have to pare back a little on share repurchases, in most cases, those dividends are going to keep flowing (and growing) no matter what happens.

You’ll remember I mentioned that the guests on the show I was watching all said that preparation for a recession needs to come before it starts and not after. Well, that's completely true.

But I’m not 100% convinced we’re in one yet. And it sounded like the guests weren’t, either. That means there’s still time. And there are still steps you can take to make sure your portfolio is ready if we are heading for a recession.

So let’s take a look at four of the most generous companies you should add to your portfolio to get paid in a recession:

You already know Walmart fared relatively well in the last recession. And you saw how it kept paying and growing its dividend right through the worst of it. But did you know Walmart has paid investors a collective $24.2 billion over the past five years? 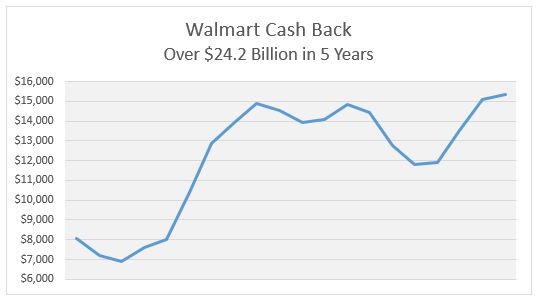 That’s right — every year since the start of 2015, Walmart has shelled out an average of $6 billion to investors through dividends and stock buyback offers.

You can’t tell me you wouldn’t appreciate a piece of that if the economy were in the dumps.

Another company giving back to its shareholder community is Cisco. This shouldn’t come as a surprise to many of you. Cisco was all over the news last year thanks to tens of billions in extra cash going back to investors in 2018.

But it wasn’t just last year that Cisco started sharing the profits. Over the past five years, its shareholders have collected a total of $27.402 billion in cash payouts. 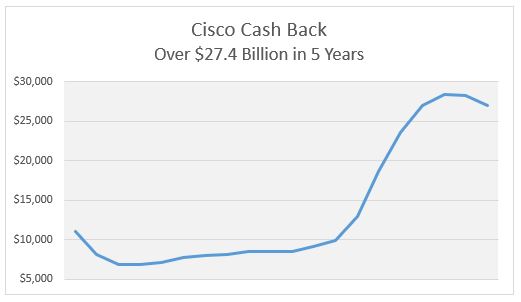 And while the buybacks might not be as big in a recession, that steadily growing dividend will sure come in handy if you’re a little strapped for cash during a market slump.

The company that made Bill Gates one of the richest people in the world has been making shareholders rich for decades, too. Recently its stock has been outperforming its FAANG competition. And the company’s paid out nearly $50 billion over the past five years. 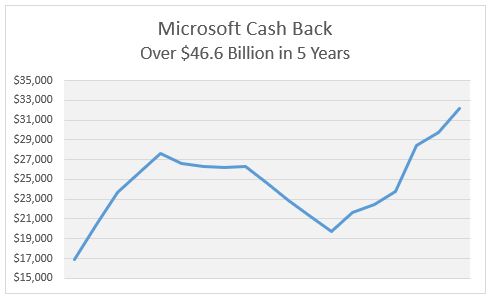 Buybacks have gone up and down. But that dividend has kept on growing for 15 years straight.

And management takes those dividend payments and hikes seriously. So you can count on them continuing to flow and grow even if we head into a recession.

It probably wouldn’t surprise you if I told you Apple has minted more than its share of millionaires. But you might be shocked to find out that over $100 billion of those profits came in the form of cold, hard cash. And that’s just over the past five years. 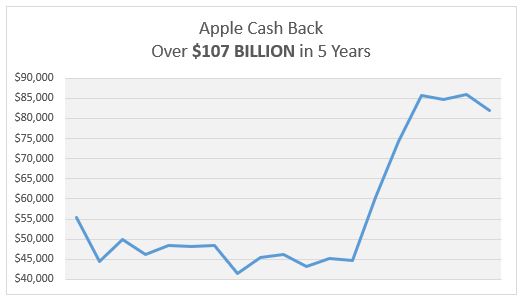 That’s right. Apple’s share price shooting higher isn’t the only way billionaires have been made through this investment. In fact, over its history, Apple has paid investors a staggering $137 BILLION.

The bottom line here is that if you’re an investor, you have a long-term horizon. And a recession doesn’t change how you pick your stocks.

You’re in it for the long haul. So you’re looking for companies that grow revenues and operating cash flows. You’re investing in solid management teams. You’re securing regular income. And you’re picking companies that pay you more every year.

And steadily growing income plus time adds up to exponential gains thanks to compounding.

It’s a simple formula: Growing income plus time equals riches. And it’ll both protect you from losing your shirt in a recession and help you beat even the best stock-pickers in bull markets.

So before we really fall into a recession (or before markets restart the rally that’s lasted since 2009), take a look at your investments and make sure they’re worthy of your hard-earned money.

Make sure they’re going to keep you flush with cash no matter what the market throws at you.

And make sure you check out my investment advisory service where this simple strategy has kept our gains growing all year and kept our bank accounts stacked with extra income.

Just click here to learn about one of our favorite income-generating, recession-beating investments.

And keep reading Wealth Daily for more actionable advice on how to beat Wall Street in any market.