Buy This to Beat Inflation in a Recession

If you believe what the president has to say about the economy and the stock market, then you can ignore everything after this line.

If you know that inflation is anything but transitory…

But there is something we can do to protect ourselves from it and make sure we’re not the ones nursing our wounds when the dust settles. 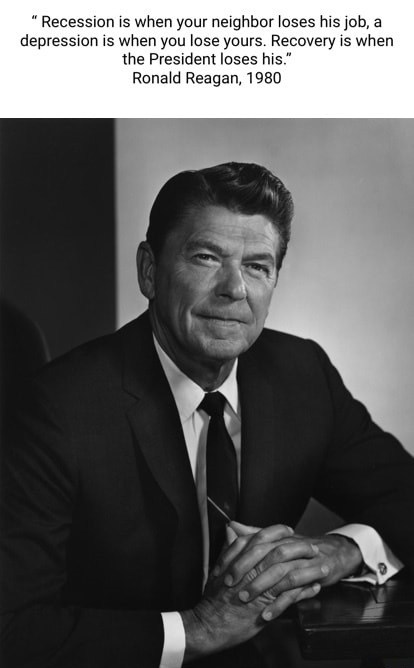 Because there will be pain. But this recession doesn’t have to turn into a depression…

Not for all of us, at least.

We’ve Been Here Before

Something that I think is hurting a lot of investors is something we call recency bias in this industry.

It just means that people are likely to think that something that happened recently is likely to happen again.

It’s why you’re hearing a lot of analysts and pundits out there comparing what we’re going through now to the 2001 dot-com collapse or the 2008–2009 Great Recession.

Those are the most recent fiascoes they can think of, so they’re pretty sure this must be playing out the same as those did.

But what I see is something far more similar to the situation that was playing out in the U.S. in the 1970s.

Sky-high inflation was crushing the consumer while rising interest rates were hobbling the economy. 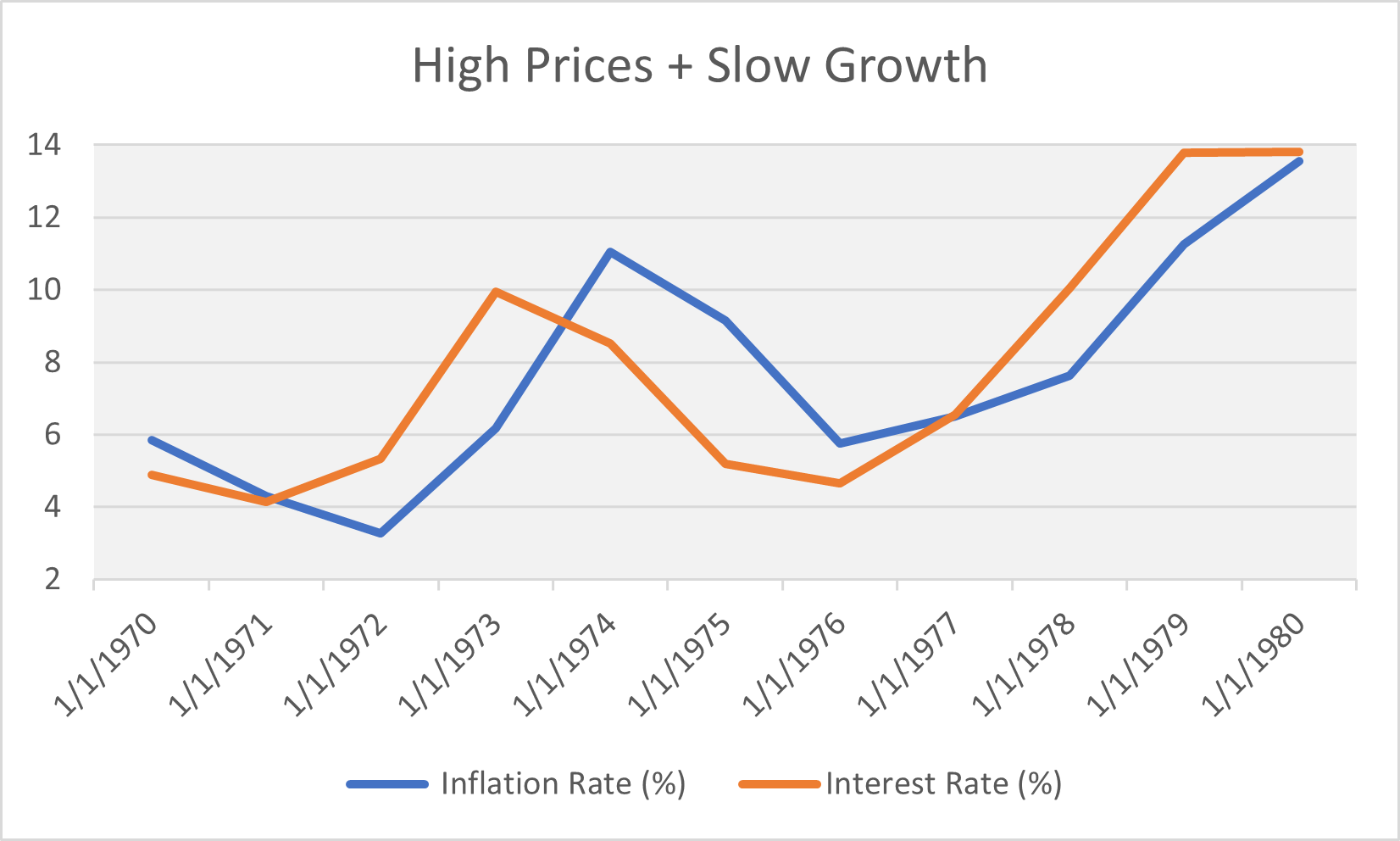 That’s what we’re seeing right now, too. Inflation is still running just as hot as it was when the Federal Reserve started its campaign to bring it down.

And that means rates are going to keep on rising right along with it.

They rose and fell, setting higher lows and higher highs as the decade wore on. And why did they do that?

Well, they did that because the Federal Reserve couldn’t hold firm in its battle to kill inflation.

It would see inflation starting to fall, declare mission accomplished, and lower rates.

In a few cases, it saw a recession looming and lowered rates to stimulate growth.

But what it accomplished was to neither kill inflation nor stimulate the economy.

It led to a lost decade for stock market investors who followed the conventional wisdom of diversifying holdings through indexed funds (investments that track an index like the S&P 500).

And what I mean by that is, accounting for inflation, index investors didn’t make any money from 1970–1980 at all.

The market looked like it was going up, and if you chart it on a graph, it rose by about 125%: 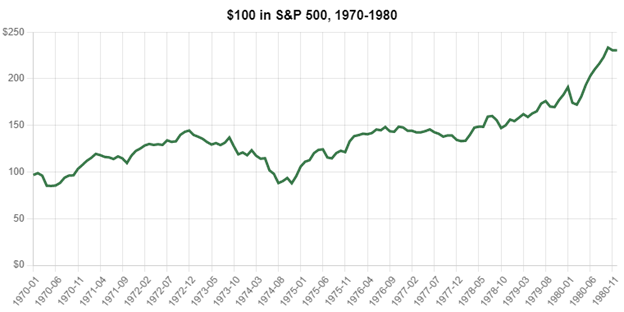 But when you take the effect of that sky-high inflation into account, those gains completely vanish: 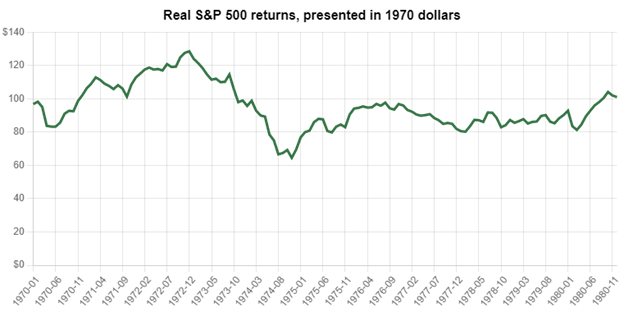 It’s like magic. Black magic, though. Let’s call it the voodoo of high inflation.

It was even worse for investors tracking the Dow Jones Industrial Average. That started the 1970s around 800 and ended them at about 839 for a 5% nominal gain…

Or a 49% inflation-adjusted loss!

And I see the exact same setup happening right now…

We’ve all heard the adage that history rarely repeats but that it often “rhymes.”

Well, it sure sounds similar to me right now…

We’ve got the highest inflation in 40 years.

We’ve got a Federal Reserve that says it’s hell-bent on curbing said inflation.

But it’s also full of people who want to cozy up to the politicians and get cushy jobs down the line.

We’ve got a president who’s past his prime.

Said president is steadily picking fights with the oil-producing and -exporting countries while he actively attacks the U.S. oil industry.

We’ve got other politicians (including the president) touting the value of price controls.

The U.S. is involved in a war that’s led to export embargoes.

And the world is divided into blocs, with the U.S. on one side and Russia on the other.

It’s sure giving me flashbacks to the 1970s even though that decade ended around the time I was born.

And I’ve got a feeling in my gut that the market’s returns are going to be just as abysmal over the next decade as they were the last time this happened.

Politicians will tout the nominal returns that make it look like your money is growing.

But your bank account will show the real effects…

An entire decade without any gains at all.

Unless you take a cue from the pages of history and get your money out of stocks and into the investments that do best in this kind of environment.

The Backbone of Society

And one of those things is infrastructure investments…

While the inflation-adjusted return of the S&P 500 barely broke even, investments in the infrastructure that allowed the country to keep running gave inflation-beating returns.

In the 1970s, two of the best performers were Deere and Caterpillar, two companies that help build infrastructure here in the U.S.

Deere stock was up nearly 300% over the course of the decade (an average of 15% a year). And that’s not even counting dividend payments.

Caterpillar was up 175% without dividends.

But today, there’s a different kind of infrastructure keeping the country running.

Back then, it was all about transportation infrastructure: pipelines and roads and bridges.

And when it comes to communications infrastructure, there’s one company that holds a near monopoly compared with all the rest…

It spent years quietly building up one of the nation’s biggest communications networks, and now it operates the majority of the infrastructure that our nation’s communications depend on.

You see, it’s the owner of millions of miles of the only type of physical connection that can keep up with the speed of the business: fiber optics.

It proved how much that infrastructure was worth as it helped all the major cellular carriers build out their 5G communications networks in the late 2010s.

And as history rhymes with itself over the next decade, I expect it to prove that worth another 10 times over.

I call this company the "5G Tollbooth" because it controlled the on-ramp to setting up 5G networks by controlling the points where the 5G antennas were connected to the physical servers where data lives.

That’s why it’s likely to be a major winner even with sky-high inflation and a deep recession.

That’s why I expect it to outperform the markets and to beat out inflation.

And that’s why I’m urging you to get invested today.

I want you to come out of this lost decade and find yourself far better off.

So take a few minutes today and learn more about this incredible opportunity presented by the gatekeeper of modern communications.

I’ll be back soon with other ways to beat inflation (and the market) even in a deep recession.