Small Stocks Are Crushing the Market

In fall of 1996, after two years of reading every investment, finance, and human nature book I could get my hands on, I came up with a brilliant but simple idea for a new investment advisory...

The investment advisory would be called The Cutting Edge. It would focus on a segment of the stock market that no big investment houses or even investment newsletter publishing firm covered: non-precious metals microcap stocks.

I’m talking about high-tech, biotech, and medical stocks so small that they barely traded. Barely traded meaning that buying on many days came from the underwriter and the company itself just to get the stock moving.

Anyways, my boss at the time, Bill Bonner, hated the idea. (You may remember his famous rants in 1998 and 1999 about Amazon.com, or the “River of No Return,” as he called it.)

If a company wasn’t exploring for or pulling gold and silver out of the ground, it was worthless in his opinion.

He routinely told me, “Instead of recommending a biotech company that has no sales, why not recommend a good gold stock? Besides, an ounce of gold can buy you a decent suit at Brooks Brothers.” That’s how Bill saw (and still sees) the world.

But I was 27 years old at the time. I didn’t have a freaking clue what Bill was talking about. Not to mention, I'd never even seen a Brooks Brothers store...

I knew I was standing at the threshold of a dramatic shift in the economy and for society.

And I had read enough about previous economic revolutions to know that those who recognized such and took advantage of it made fortunes in the early stages.

I had also read that many of the great changes came from very small companies that had everything to gain and nothing to lose.

And I hit the nail on the head.

To give you an idea of how “getting in early” can impact your portfolio and net worth, here’s a scan of the old Cutting Edge portfolio (click to enlarge): 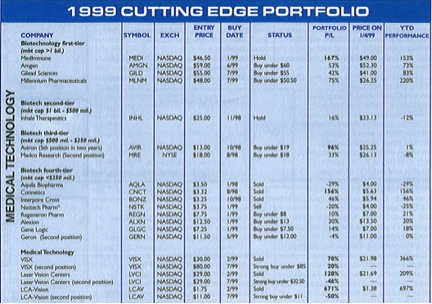 When I recommended these stocks, their average daily volume was around 40,000 shares. Both were true microcaps, meaning they had market valuations less than $250 million.

Today Regeneron trades an average of 1.2 million shares per day and has a market cap of $27 billion.

It was the investment of a lifetime. But you had to be willing to speculate. You needed foresight of emerging trends and an above normal appetite for risk.

I’m also here to tell you that history is repeating itself...

We stand at another threshold of dramatic change and innovation.

Small companies are pushing the envelope of the impossible. And yes, they are returning investors dramatic gains...

Take a look at a one-year chart of microcaps versus everything else: 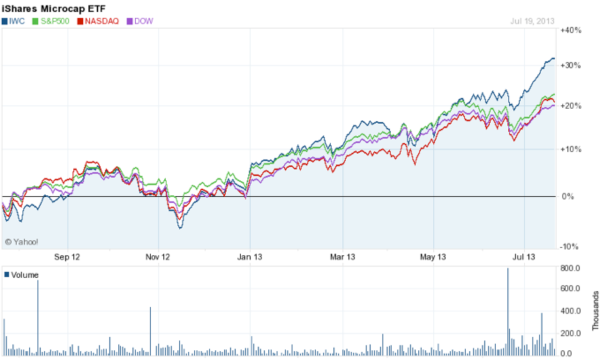 When microcaps lead, everything else follows.

Get ready for some blockbuster gains. They’re coming...

And we’re going to give them to you.