Over the past few months, you might have heard a few people saying crazy things like Warren Buffett had lost his touch and was washed up as an investor.

Maybe you were wont to believe them. I mean, his company’s been underperforming the market for a few years now.

Buffett comes out and talks about his investments (or lack thereof), and invariably, people lambast him about the terrible decisions he’s making.

Then we fast-forward a few years and see that he made a really great decision and is reaping billions in profits. I have a hard time imagining it’s any different this time.

Earlier this week, Mr. Buffett made an announcement that should have driven massive retail buying across a certain industry but didn’t.

So today, I want to tell you about Warren Buffett’s $123 billion bet on the future of 5G and how you can potentially reap even bigger rewards than the Oracle of Omaha...

As a large investment fund, his company must file what’s known as a 13-F with the SEC each quarter. These forms detail the company’s massive positions in the stocks it holds and any changes in those positions.

And this past Tuesday, that 13-F told an interesting story about a gargantuan bet on the future growth of 5G in the U.S.

Over the past quarter, Warren Buffet’s company initiated a large position in Verizon — the top mobile telecommunications company in the country. And when I say large, I mean really, really big. I’m talking about 147 million shares for a grand total initial investment of $8.62 billion.

But that wasn’t the only big bet Buffett made. He also added to a position in T-Mobile that he’s been building since last year. That’s up to 5.2 million shares valued at $632.84 million.

While the headlines focused on the 6% he sold off, he also has a pretty massive stake in Apple — the company making the best-selling 5G phone in the world. Berkshire owns 887 million shares of Apple, a stake worth a whopping $114 billion.

Add it all up and you’ve got a $123 billion bet on the growth of 5G in the coming years — a bet that's all but guaranteed to get even bigger with time.

But unlike a lot of the YOLO investments you’ll see on those message boards, this is one of the smartest moves a conservative investor can make.

You see, 5G is an instrumental part of a much bigger movement — digitization. I’m talking about the internet of things and the interconnectedness of the global telecommunications network.

And that’s going to drive massive economic growth which will, in turn, drive massive profits for investors who position themselves correctly now.

In fact, researchers at the World Economic Forum wrote that the connectivity that will be enabled by 5G technology will “create approximately $3.6 trillion in economic output and 22.3 million jobs by 2035 in the global 5G value chain alone.”

They go on to note that this will “translate into global economic value across industries of $13.2 trillion.”

That’s some serious economic development right there. And with that kind of growth come serious profits.

But are we really supposed to expect that the biggest winners from 5G are going to be major established companies everyone knows about? Are we really likely to see those storybook quadruple-digit gains from stocks like Verizon, T-Mobile, and Apple?

Maybe. But there are other 5G investments with far more room for potential growth. And there are even still some out there that the rank-and-file investing world hasn’t heard about yet.

Sure, Apple will make a lot of money selling 5G phones to its droves of loyal consumers. And Verizon and T-Mobile are going to rake in revenues as more people get access to mobile networks.

But the real growth is going to come from the companies providing the infrastructure that lets the network operate.

Lucky for you, investors aren’t really focused on those companies just yet.

The thing is, for 5G wireless to really work, you need a lot of wires — a whole lot of wires, in fact.

You see, the great thing about 5G is how fast it is and how much data it can transmit. But in order for those wireless communications to be worth anything, the data has to be able to make it into physical storage locations known as server farms or data centers.

That way, it can be accessed quickly and easily when it’s needed. The only way to transmit data that fast through a physical connection is through fiber optic cables. And there just aren’t a lot of those around yet.

However, one company (that already has the biggest fiber network in the country) is working to change that. It’s already making early investors rich in the process.

You see, this company had been quietly building up its network of fiber optic cables for years in anticipation of the push to 5G. It now owns the most extensive network of dark fiber in the country.

Below, you'll see two maps. On the left is a map of the cities in the U.S. with some kind of active 5G network. On the right is a map of this company's extensive fiber-optic network. Notice anything?

That's right. Every city with 5G wireless access is a city that’s on this company’s fiber network. That’s the only reason those cities are able to have those kinds of wireless speeds.

But because it’s not a “sexy” stock like Apple, you’re not hearing about it on CNBC, Bloomberg, or Fox Finance. Those channels aren't selling ads by talking about picks and shovels over there.

So they aren’t going to tell you about it, but that’s worked out really well for investors in the know. It's allowed us to load up on shares at absolute rock-bottom prices.

Now that word is starting to get out about the massive potential baked into this company’s operations, those shares are taking off. 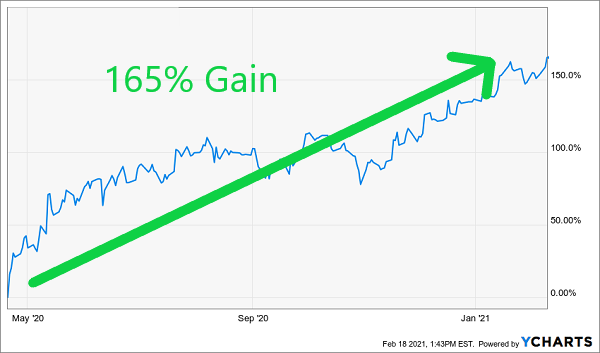 That’s just the beginning. With shares trading hands a little below $15 today, there’s still enough runway for us to see another 400%–500%.

That’s why I want you to get invested today. I want you to be cashing in on the BIG 5G profits, not being satisfied with a paltry double-digit gain.

So my colleague Briton Ryle and I put together a presentation that details the opportunity. We’ll tell you about the company and its competitive advantages.

You’ll hear from some current investors about how our recommendations have changed their financial futures. And you’ll get all the details you need to start investing right now.

We’ve also compiled a report with all the same information for those of you who prefer to digest information in written form. Just click here to read through that at your leisure.

But don’t take too long. Remember, a few months ago, this was a sub-$5 stock. Today, you’ll have to pay nearly three times that much for a share.

A few months from now, you could have to pay another three times what shares cost today.

Haven’t you missed out on enough profit already? Don’t delay and cut yourself out of any more of the gains.