Bioplastics... Will They Solve the World's Litter Problem?

We only recycle 9% of the plastic we consume.

For all the effort and fanfare, that's the sad truth. Less than 1/10 of the plastic we use winds up not buried in the ground, not dumped in the ocean, and not burned up in giant industrial incinerators.

And we do use a lot — more than 380 million tons worth every year, with about half of that going into "single-usage" products like disposable cups, plastic bottles, and merchandise containers.

Recycling, as much as it makes us feel good to talk about to our friends and neighbors, is little more than a Band-Aid over a gushing head wound.

It's simply not going to do the job of decreasing the environmental burden of plastic on our ecosystem, and if you don't already know how plastic that's improperly disposed of can and does harm people directly, please check out last week's article, which delves into that topic.

The solution we need will have to involve phasing out the manufacture of traditional plastics altogether and replacing them with something new.

Recycling Will Never Be Enough

That apparent replacement, occasionally touted as plastic 2.0, is a group of materials widely known as "bioplastics."

"Bioplastics" is a very general term for an entire category of synthetics derived from biological precursors such as plant matter.

For years now, chemical companies have been working overtime trying to brand bioplastics as the future of all things currently dependent on traditional, petroleum-based polymers.

The ad below comes to you courtesy of Danimer Scientific, which was using rather evocative imagery to promote its canola-based formula. 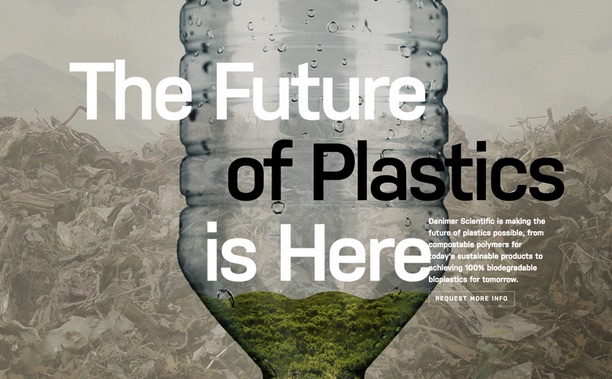 The main problem behind PR campaigns like this, which have been spearheaded by chemical giants including DuPont, Mitsubishi Chemical, and BASF, is that the whole thing is a smokescreen.

Today's common "bioplastics" fail the one major test that matters: They will not naturally decompose in cold ocean water or in raw, natural soil — precisely the types of environments where most discarded plastic refuse ends up.

"Bio-based plastics can be just as harmful as regular plastics," said Dr. Kimberly Warner, a senior scientist at Oceana. "Instead of using a fossil fuel feedstock, they’re using a modern plant-based feedstock, but it behaves just as other plastics do in terms of persistence."

That "persistence" Dr. Warner mentions refers specifically to a material's ability to continue existing, unchanged, wherever it happens to end up.

Looking at the fine print from the Plastic Industry Association's own definition of bioplastics, the subterfuge is barely hidden at all: To be considered a bioplastic, a material must be “partially or fully bio-based and/or biodegradable.”

Viewed from a purely legal standpoint, a material doesn't have to have any natural decaying properties at all to be considered a bioplastic... leaving the question: Why bother?

But the problem doesn't end at mere misrepresentation.

The vast majority of bioplastics cannot be recycled like traditional plastics.

For the compostability properties of bioplastics to be exploited, they must be shipped to and processed in specialized industrialized composting facilities — facilities that most cities simply do not have.

Without traditional recycling as a means of disposal, most bioplastics end up exactly where they'll do the most harm — landfills.

So is it a complete waste? Is bioplastic nothing more than another multibillion-dollar fraud perpetrated on a naive but well-meaning populace?

Not entirely. Bioplastics do take the burden off the petroleum industry, as they do not require fossil fuel as the key production precursor.

That is enough to cause the pendulum to begin to swing.

By the year 2050, as much as 50% of current plastic production is expected to shift to non-petroleum-based synthetics, so the economic trend is not going to stop.

Bioplastics Are Here to Stay... Regardless

The question is... Will the promise of a truly green plastic ever see reality?

The answer is yes.

Right now, there is a new player on the plant-based plastics stage, and the opportunity to truly redefine the plastics industry is immediate.

This company, valued at less than $60 million today, has developed a truly compostable, plant-based plastic alternative.

Able to fully decompose in soil in just 60 days or less, this material isn't a stopgap half measure. It's the solution to the global plastic epidemic.

The company is entering the market through one of today's most popular disposable food container products: the single-use coffee pod.

We use over 50 billion of these tiny containers per year, and they're only getting more popular.

If this company manages to capture even a fraction of the market, the rest could just fall in line.

It's a multitrillion-dollar industry trend, and it's just getting started.

When all is said and done, this tiny company could emerge as a multibillion-dollar giant — in direct competition with the likes of DuPont, BASF, and every other chemical firm in existence today.

This story is still fresh. The big media headlines haven't gotten a hold of it yet.

Soon enough, this will all change.

Get your eyes on my detailed presentation, available to you right now, no credit cards, emails, or registration required.