Benefit from Volatility by Trading the VIX

Since the start of 2014, the markets have been in a period of increased volatility.

Isn’t there something investors can do to mitigate such volatility and earn a decent return?

There is... by trading volatility itself through the CBOE Volatility Index (VIX) and related ETNs.

What the VIX Offers

During periods of relative calm and small market fluctuations, investors will pay less for options, since options depend on sharp moves to gain value. Conversely, during periods of market upheaval, option sellers will demand more, and option buyers will gladly pay more for the enormous leverage and protection options provide.

Options, therefore, are a useful gauge of volatility. High option prices indicate the expectation of increased market gyration, while low option prices denote calmness. To measure this implied or projected volatility, the VIX holds a sampling of S&P 500 call and put options taken from the closest two months to expiration, rolling them forward in small quantities on a daily basis to ensure an average 30-day expiration across its entire basket of options.

When we superimpose the VIX index overtop the S&P 500 index, as in the graph below, we note two very important features of the VIX:

Easily noticed is how the VIX will spike upward when the S&P falls. This is due to increased put option buying during stock sell-offs, inflating the prices of options and thus increasing the value of the VIX.

It gives the VIX the distinctive appearance of a seismograph printout. It measures the quakes and after-shocks that regularly strike the stock market, with the corrections of 2010 and 2011 clearly marked.

Another noticeable characteristic is how after these periodic quakes, the VIX tends to return to a fairly consistent level, generally in the 10- to 20-point range.

During periods of market calm, option prices fall back down to normal levels, and the VIX falls with them. The VIX is thus “mean-reverting” in that it consistently reverts back to a mean or average level.

How can we use the VIX to protect our portfolios? Professional money managers will often use VIX futures contracts. We average investors, though, would be better served by VIX ETNs.

But because VIX ETNs utilize VIX futures, we should take a look at how VIX futures work to better understand the ETNs.

Every month, the CBOE issues a new VIX futures contract with nine months to expiration, so there are always nine monthly contracts ranging from one to nine months of time.

The closer a contract is to expiring, the more fully it traces the movement of the VIX index. Conversely, the farther from expiration a contract is, the less it will move. 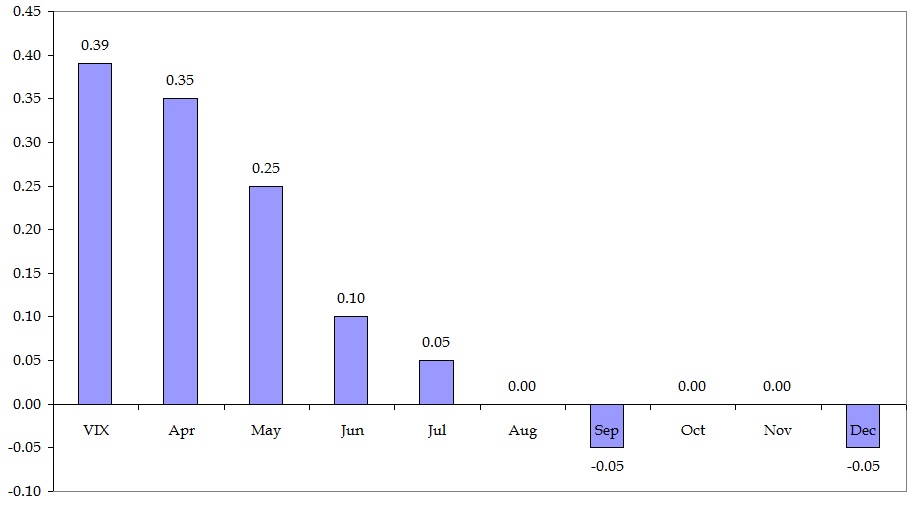 Just think of two planes landing on an aircraft carrier. If the carrier moves a mile, a plane one mile away needs to adjust its heading significantly, while a plane ten miles away need adjust only a little.

Another important behavior to note is how each futures contract loses value over time.

When a new contract is issued each month, its price is typically inflated slightly above the current VIX index to account for current volatility, interest rates, and other variables that determine the cost of the investment.

This premium added to a VIX futures contract when it debuts will slowly erode as time passes, as depicted in the graph below comparing the April 2014 contract to the VIX index beneath it.

The contract debuted in July 2013 some 7.50 points above the VIX, continually adjusting downward until it eventually meets with the VIX at expiration. 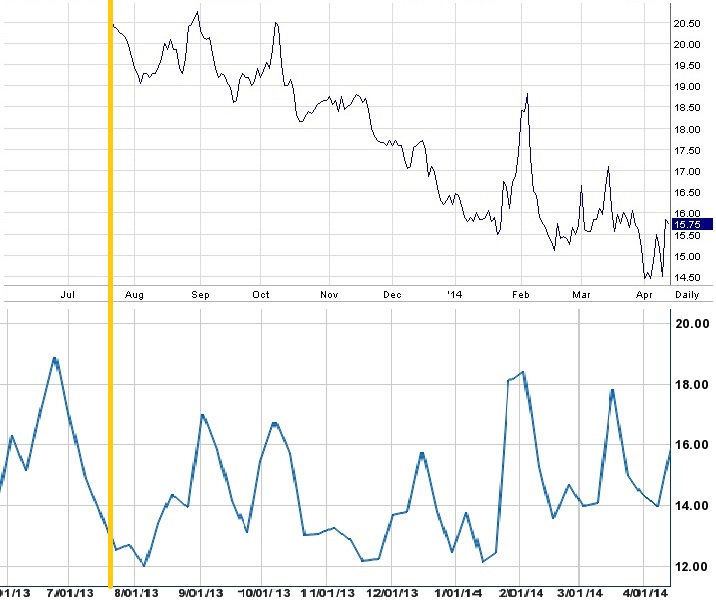 This price erosion is one reason why futures contracts are not intended for long-term holding but for short-term trading. ETNs can extend that time horizon a little further.

Recall how futures contracts that are closest to expiration will capture more of the VIX’s movement, while contracts farther out move less? This same behavior affects the two ETNs, where the VXX comprised of near months will track the VIX much more closely than the VXZ comprised of far months, as noted in the graph below.

Thus, if you want to capture more of the VIX’s movement, you’d be better off with the shorter-duration VXX.
However, we need to remember that the futures’ price erosion affects the ETNs as well.

As seen in the graph below, while the VIX index (black) spent most of the past 12 months reverting back to its mean, the two ETNs just kept right on falling, the short-term VXX (beige) falling the most.

Why? Because the two funds roll their futures contracts slightly differently. The shorter-duration VXX rolls its futures contracts from the first month to the second month a little at a time each trading day, ensuring that the average expiration of its entire holding remains at 30 days.

But rolling every day creates a problem. Since the VIX index spends most of its time reverting back to its low mean average, its futures contracts are generally in contango — first-month futures are the cheapest, second-month are slightly more expensive, and so on down the line.

Only when the VIX spikes up and pulls the futures into backwardation — where first-month futures are more expensive than second-month futures — will the fund generate a profit. But such times are rare, and the fund will most often incur losses when rolling.

The medium-duration VXZ similarly incurs losses when rolling, but not as badly. Because the fund holds fourth- to seventh-month futures, it has 60 trading days to roll its entire portfolio from the fourth month to the seventh, rolling only 1.66% of its holdings each trading day.

That’s not much of a consolation, is it? The VXZ still lost 20% over the past year, while the S&P 500 has gained 15%. Is it even worth it to protect our portfolios with these VIX-based ETNs at all? It is, but only for the short term. These instruments are not intended for holding long term.

But wait a second... What if we reversed the process? If these ETNs steadily lose ground as they erode, wouldn’t we generate a profit by shorting them?

Indeed, we would. But we can do something better than shorting the VXX or VXZ... we can long the VelocityShares Daily Inverse VIX Short Term ETN (NYSE: XIV), which is already an inverse VIX-based fund.

XIV: The VIX in a Mirror

This profit stays in the fund and shows up as share price appreciation, as noted in the graph below, where the XIV’s gain of 115% over the past three years has beaten the S&P’s 40% gain and has absolutely clobbered the two long-based VIX ETNs.

If you want volatility protection, you can still use VXX and VXZ — but only over very short periods, for they erode far too quickly to justify holding them long term.

On the other hand, if you want to profit from volatility, then the inverse XIV is the way to go, since it continually generates revenue simply by rolling its short VIX futures.

The only drawback to XIV, however, is that it falls with the S&P and will not protect you from market volatility. But it certainly can help you generate profit from volatility if you buy XIV when the VIX spikes. And you can hold for as long as you want, actually beating the S&P over time.