Well, I hate to be the bearer of bad news, but it sure looks like we've got some downside coming for stocks. We've got a bond market signaling recession, we've got a stalemate in trade negotiations with China, we've got global manufacturing surveys looking very weak, oil's weak and gold is rallying...

Research firm FactSet says there has been a 40% increase in the number of companies that cited tariffs as an issue affecting earnings in second quarter earnings reports.

Yep, it's a pretty solid laundry list of problems. And the S&P 500 is holding just 100 points shy of record territory because the Fed is poised to cut interest rates. I am consistently surprised at the number of reasonable and intelligent people who honestly seem to believe the Fed can save us.

Again, I hate to be the bearer of bad news, but the Fed can't save this stock market, or the global economy. In fact, it's reasonable to lay the blame for the tepid global growth right at the feet of the world's central banks.

When all you have is a hammer, everything looks like a nail. Central banks’ faith that ever-cheaper money will stoke demand has gotten absurd — with a straight face, they think negative bond yields will help.

There are a couple problems with that. For one, cheap money doesn't really create demand — especially after a 10-year bull market. Between 2013 to 2018, U.S. car sales were very strong. 2018 was a record, even though rates were rising. Seems to me if you needed a new car, you've bought one. Incrementally lower monthly payments aren't gonna suddenly tip the scales.

But more importantly, low interest rates actually encourage borrowers to take less risk. Quantitative easing launched the money supply — to the point that hyperinflation was predicted. But that money didn't "do" anything. It never entered the real economy. Banks borrowed it... and then let it sit at the Fed and collect interest. Companies borrowed... and bought back stock.

When rates are higher, you have to put money to work to get a return that's higher than the cost of capital. If the cost of capital is low and demand is weak, eh, why not borrow a lot and buy bonds? Pretty much totally risk-free way to make money.

Now, I'm not personally worried about an imminent recession. Job growth and consumer spending are both pretty darn strong. And I don't see a really good reason they should suddenly reverse. But that doesn't mean the possibility isn't weighing on investors. I mean, you keep hearing "recession" on the news, and pretty soon you might decide it's time to lighten up on stocks.

And of course, the collapse in trade talks with China isn't helping. Deutsche Bank (for one) is pretty much saying there will not be a deal — ever. They say China is moving on. I don't know how much faith you wanna put in Deutsche Bank — the company is kind of a disaster — but good luck finding anybody who's optimistic about a trade deal right now.

Ultimately, it may be better for the markets if we do just move on. No deal is likely better than a bad deal. Maybe instead of "I hereby order..." just let companies decide if they wanna do business in China or not? Just a thought...

Seriously, though, if the trade talks simply ended, would it be that bad? At least then we could stop getting jerked around every time the president picks up his phone...

Let's Go to the Chart

All that stuff is fun to talk about — if you wanna call it fun. I sure do. I love talking about stuff. But I also know that talk is cheap. It's what traders and investors do that really counts. To see, let's have a look at that S&P 500 chart... 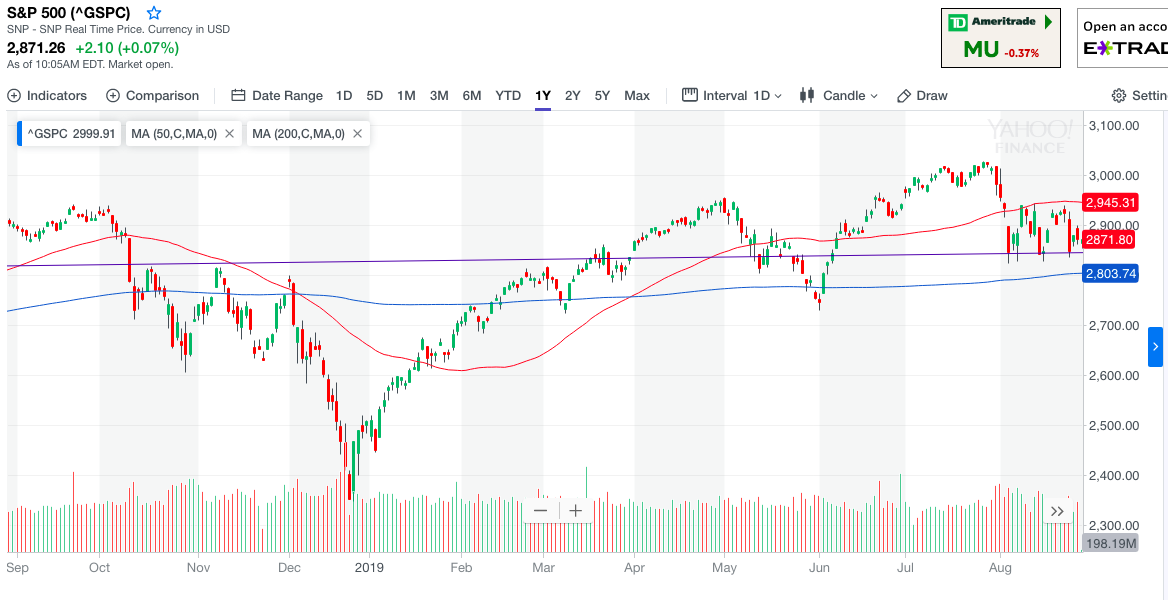 I like a simple chart. I don't need a ton of lines and squiggle things at the bottom. Just give me a couple moving averages and support/resistance, and I'll take it from there, thanks.

So that purple line is a pretty significant support/resistance point. And as you can see (at the far right), the index has been bouncing off the purple line — three times in the last month.

The rule for testing support is that the more times you test it, the weaker it gets. Long story short: It looks inevitable to me that the S&P 500 falls below that support level (2,840) and we get a retest of the June low at 2,700.

Now, you notice the little banner ad at the top of my chart there? It says MU? Well, those are the puts I'm telling Real Income Trader subscribers to buy. So you know, we made 135% on those QCOM calls I was telling you about last week.