Up until this Tuesday, gun-making companies in the U.S. were some of the only stocks that weren’t looking better thanks to the “Trump trade.” But that changed very quickly after the administration announced it has plans to loosen restrictions on U.S. non-military weapons exports.

Domestic weapons sales soared while Barack Obama was in office. People were afraid the government was going to tighten gun control laws. So, they stockpiled as many firearms as they could get their hands on. Ammunition sales were sky-high, too.

But that all changed when Donald Trump won the election last November...

He ran with strong support from America’s pro-gun lobbies. The NRA spent over $30 million supporting the president’s campaign. Trump was going to make America safe for gun owners again.

The drop was so drastic that shares of the companies sold off 26% and 50% respectively since the election. Apparently, having a pro-gun president wasn’t as good for the gun-makers as they’d expected.

But that all started to change this Tuesday...

Gun-Maker Shares Shoot for the Sky

The shares of both Sturm Ruger and American Outdoor Brands soared as high as 18% earlier this week to close the day 15% and 12% higher, respectively. 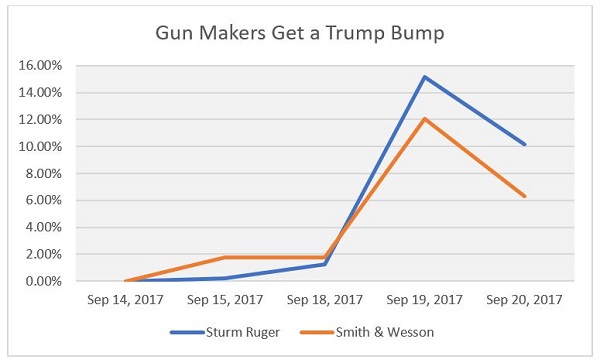 That’s because on Tuesday, The Trump administration announced it has plans to shift oversight of non-military U.S. firearms and ammunition exports from the State Department to the Commerce Department.

While it might not sound like a huge deal, it is. The State Department restricts weapons exports to keep U.S. guns out of the hands of those who might turn them against us. But the Commerce Department wants to boost trade — especially U.S. exports — to help reduce our trade deficit and increase GDP.

So, it stands to reason that the Commerce Department will be much more lenient when it comes to exporting firearms and ammunition for sale outside the country.

As with most policy decisions, there are supporters and opponents of this one. And there are potential benefits and potential downfalls. I’m not here to give an opinion. I’m just reporting the facts.

And here they are...

Supporters of this shift of ownership from State to Commerce include the NRA, the National Shooting Sports Foundation, and the Trump administration (obviously), among others.

Lawrence Keane, SVP of the NSSF, says the shift could boost annual sales by 15–20%. Last year, the State Department licensed about $4 billion in commercial firearms sales. About $3.2 billion of that would shift to commerce under the new organizational structure.

Proponents also cite the fines smaller businesses in the firearms world must pay. They say the blanket legislation smothers small business owners like gunsmiths and repairmen. And they hope a shift in ownership of the process from State to Commerce would help those small business owners.

And, finally, supporters of the shift in oversight say it will allow the State Department to focus its resources on exporters who might be selling arms to terrorists.

In fact, more than 140 members of Congress sent a letter that said, in part, oversight by Commerce will “enhance our national security and better protect America’s most sensitive defense technologies, while improving U.S. competitiveness by reducing unnecessary restrictions on exports of less sensitive commercial items.”

All good things. But then you’ve got to look at the potential downfalls and see which outweigh the other...

And the Bad News

Opponents of the shift worry the Commerce Department will ease restrictions so much that it will become easier for enemies of the state to get their hands on high-power firearms.

As one administration official put it, “Commerce wants more exports to help reduce the trade deficit. And State wants to stop things because it sees proliferation as inherently bad.”

So, does that mean Commerce will lighten restrictions of exports to the point that terrorists are easily able to get their hands on U.S. firearms?

Well, it’s definitely a possibility. The shift would move weapons like the AR-15 assault-style rifle and semi-automatic handguns from the tightly regulated State Department Munitions List to the Commerce Control List. The latter allows for more streamlined licensing for exports and overseas sales.

But many fear that a more streamlined process will make it far more difficult to keep these firearms out of the hands of extremist terrorist organizations. And seeing as the move comes in the wake of multiple terror attacks across Europe, calling it “ill-timed” may be an understatement.

Senators Ben Cardin, Dianne Feinstein, and Patrick Leahy recently sent a letter to Secretary of State Rex Tillerson urging against any large regulatory changes and pointing out that combat firearms are the “primary means of injury and destruction in civil and military conflicts throughout the world.”

But the administration wants to take steps to make American companies more competitive on the global scene. And it wants to encourage more exports to reduce our trade deficit. Easing restrictions on some of the best firearms on the market for international sale will do that.

The same administration official cited earlier was quoted as saying, “We want to make a decision that prioritizes what’s more important... This will allow us to get in the (small arms sales) game for the first time ever.”

The administration says it is not looking to green-light dangerous sales. But it sounds like that official has already decided it’s more important to reduce the trade deficit than to stop the proliferation of arms.

Now, before you go either condemning Donald Trump for arming terrorists or applauding him for such an insightful regulatory shift, you should know this was actually started back in 2009 under the Obama administration.

The former president wanted to streamline small arms export controls but was never able to get it translated into an official policy. The process kept getting held up as the country experienced multiple mass shootings, including the one at Sandy Hook Elementary School in Newton, CT, where 20 children and six adults were killed by a deranged gunman with an AR-15.

Like I said earlier, I’m not here to give an opinion. Just the facts.

And one fact is that if this policy proposal becomes law, shareholders in U.S. small arms and ammunition manufacturers and retailers stand to benefit greatly. And if it's done correctly, hopefully it won't put more weapons into the hands of those who would attack us and our allies.

Shares are still down from the massive post-election slump, even after that big rally on Tuesday. So, you’ve got the opportunity to buy Sturm Ruger and Smith & Wesson’s parent, American Outdoor Brands, at discounted levels.

And you’ve also got an opportunity that nobody seems to have noticed yet. While Ruger and Smith & Wesson are particularly well-known names in the firearms business, there’s another company that hasn’t seen the same kind of buying action yet.

It’s called Vista Outdoors (NYSE: VSTO). And it’s a gun-maker, too. It owns numerous brands in the outdoor sports industry, one of which is Savage Arms. And its stock only rallied about 5% after the recent announcement.

That leads me to the conclusion that there’s still a lot more rally left in the shares once more investors realize the company stands to benefit from the regulatory changes, too.

Any of the three stocks will provide a solid gain, though. That is, if this proposal becomes law.

So, if you’re willing to make a bet, set up a buying schedule on one or all three companies and start your position before more buyers get on board.

Your 5 Forever Investments
While it's hard for the average person on the street to see the use in buying shares of a company and never liquidating, there are some infinite-term investments that just about every one of us would be smart to look into.
Firearms: Either Way, You're Going to Get Pissed
Having spent enough time under the deluge of ignorance spewed on the topic of gun control and the nature of certain specific firearms, I figured it was time to do a bit of spewing of my own.
Why Conservatives are Investing in Cannabis
The legalization movement is one being embraced by both liberals and conservatives.
Buffett's Envy: 50% Annual Returns, Guaranteed
Warren Buffett once told investors at an annual shareholder meeting, "...it's a huge structural advantage not to have a lot of money. I think I could make you 50% a year on $1 million. No, I know I could. I guarantee that."