Are You Being Lied To?

Are you hoping to change the world through your investments? If you are, congratulations. It’s a noble cause. But it’s one that often ends in heartache.

I’m reminded of a company called Global Crossing. It started off as a telecommunications company that provided computer networking services. Things got off to a good start, but the company got too ambitious.

It was going to link the world through high-speed undersea cable networks. And at one point, that “change the world” story got the company a $47 billion valuation.

Unfortunately, changing the world is a little harder and more expensive than the company or its investors thought it would be and within three years of that valuation peak, the company was bankrupt.

The founder and CEO has gone down in history as the spokesperson for corporate greed. And the retail investors who helped build up that valuation lost it all.

But we still use those cables it used to own today. It actually did change the world. It’s just that the people who profited were not its investors.

And that’s why most investors are here to make money, not change. That’s also why investors are always trying to find the next new thing that will go parabolic, be it Beanie Babies or True Religion jeans.

And that’s probably why every analyst, TV personality, or person who thinks they’re a professional investor is telling you to buy “green” companies.

Well, you could listen to all the people who are tripping over each other to say the exact same thing.

Or you could take a very brief look at what’s actually been making people money (spoiler alert: It's not those "green" companies)…

“It’s Renewable, but It’ll Take a While”

While all the professionals have been telling you to buy green anything, those stocks really haven’t been making investors any money in 2021.

Tesla is up a whopping 6%. NextEra is up a staggering 9%. And FuelCell is down 45% for the year and even further from its mid-February peak.

But there’s one kind of renewable energy that’s actually been making investors profits this year. And it’s going to keep making them profits for at least another decade to come.

So far this year, my favorite stock in the industry is up over 100%, making those other investments look like a pretty big mistake. 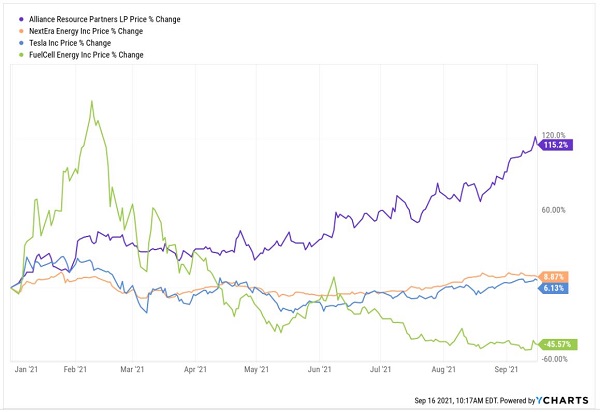 I call it renewable, but you probably don’t feel the same way. It is, though. It just takes thousands of years for that renewal to happen.

I’m talking about coal. It’s the No. 1 source of energy in the world. And it’s used by everyone.

And that’s not going to change anytime soon, despite the rhetoric of all the politicians out there.

I’m sure I’m not going to make many people happy with this analysis, but I’m not here to make you happy. I’m here to give you the truth nobody else will.

And that truth is that the world will be coal-powered for at least another decade. But probably a lot longer…

We Always Use More

Throughout the course of human history, we’ve discovered lots of great fuels to generate energy of some sort.

Since we’ve got all these fuel sources, some of which are pretty great and generate a ton of energy, you’d think we use less of the “old” sources, right?

Well, you’d be wrong. Literally every time in human history that a new fuel has been discovered or invented, humans have stepped up their consumption of the old fuel.

And we use more oil now than we ever did before “green” energy came on the scene.

That’s the way of the world. New fuels are expensive. Rich countries like the U.S. might transition to them — we’ve apparently got tons of money to waste.

But poor countries aren’t going to be setting up solar arrays that fast. They’re going to burn cheap fuels as long as possible so they can save their money.

And that doesn’t just go for poor countries. China’s going to be burning tons of coal every day for the next 40–50 years. It’s got a ton of new coal-powered electric plants and it’s building more.

Those last more than a decade or two. And you can bet your bottom dollar China's not shutting them down until they’re completely spent.

So if you’re investing to change the world, by all means, go out and pick up some NextEra Energy stock or some shares of Tesla.

But if you’re investing for profits, then you might want to take a look at the companies that are really going to power the future.

Alliance Resource Partners (ARLP) is my favorite in that sector. I’ve got a position and am continuing to add to it with no intention of selling anytime soon.

There are other companies that have great operations and great coal. You’ll have to look extra hard for them, though. None of them have the dreaded word “coal” in their name anymore…

It’s just what powers the world and those massive profits.

Or you could invest in the only other viable form of renewable energy out there and get some exposure to nuclear power. It’s clean, green, and can run your whole town or city.

If we’re really getting away from polluting fuels here in the States, we’re going to need a lot more nuclear energy.

That means uranium for fuel. I really like the Sprott Physical Uranium Trust (SRUUF) for its exposure to the actual fuel and increases in its price.

It’s also a way to capitalize on any retail interest from investors not able to trade futures on the actual metal.

But there’s another, better way to invest in the future of this industry. And my esteemed colleague and compatriot Keith Kohl has zeroed in on the No. 1 stock to play that future.

So I got him to put together a special presentation for me to share with you today: 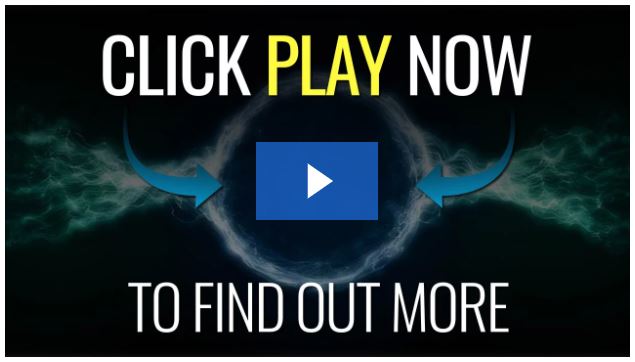 You see, the U.S. has a lot of coal-fired power plants too. But ours aren’t new and are getting ready to come “offline.” That means they won’t be useful for making energy with coal anymore.

But it also means they’ll be eligible for an upgrade and retrofit that could add another half a century or more to their useful life. AND it'll make them one of the cleanest sources of energy in history.

The bottom line is you can’t just take what people tell you at face value. You need to do some digging yourself.

And you need to invest in coal because the rest of the world is going to keep using it for decades, if not centuries.

But the bottom line is also that you need to invest in other forms of renewable energy, too.

The U.S. has made it clear we’ll be steering away from coal. But that means we’ve got to find a way to get energy to those tens of millions of Americans who still rely on it.

I’ve given you the best way to play the continued global dependence on coal.

Now let Keith tell you about the company that can make America’s coal-fired plants competitive again AND make them part of our “green” future plans.