Are We Headed for a SPAC-tacular Collapse?

According to SPAC Research, over the course of 2020, 248 special purpose acquisition (or blank-check) companies listed shares on the public markets. 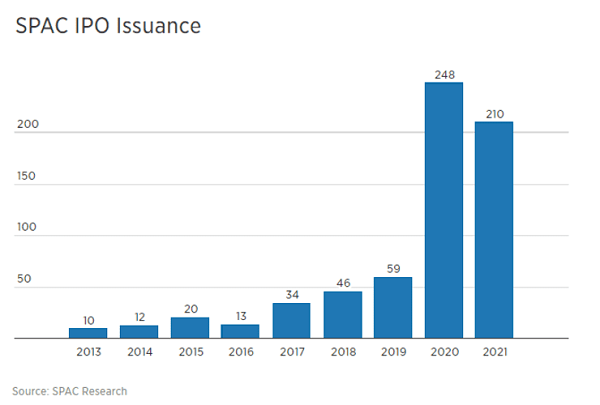 With all those new SPACs out there looking for companies to buy, I’m wondering how much quality is left for them to pick up.

And I’m thinking we’re heading for a spectacular collapse of the SPACs that have been all the rage since DraftKings listed last year.

One good sign (or bad, depending on your stance) is that some SPACs are completely changing their strategy just to find somewhere to put their billions of dollars.

Another example is Stable Road Acquisition Corp. It’s a SPAC that was created to find a cannabis company to take public. It couldn’t find any so it’s buying a space company instead.

They completely turned their strategy on its head. They have no strategy anymore, to be perfectly honest. They just have a lot of money they have to give back if they can’t spend it somehow.

It kind of reminds me of my days examining government budgets and projects. Without fail, at the end of every single fiscal year, I would have a flood of people in my office desperately trying to spend whatever they had left of that year’s budget on anything they could find.

You see, they wouldn’t get more money added to their budgets if they didn’t spend them all that year. So they decided it was better to waste the money than have to give some of it back.

Sounds a little like what those two SPAC managers did. But what do I know?

FOMO Is Not a Good Look

Investors are telling me I couldn’t be more wrong as they pile money into these companies.

But that’s because they’re falling victim to the billionaires running the companies. They’re seeing these successful people and their lavish lifestyles on social media, and they’re trying to ride their coat-tails.

They’re getting FOMO and jumping on board without so much as a cursory glance at what they’re buying.

And that’s why SPACs like Bill Ackman’s Tontine Holdings are trading a good 40% above their listing price. It’s why Chamath’s SPACs are too.

But FOMO is not a good look, especially when it comes to investing.

And the data shows that letting FOMO push you into buying a SPAC is a recipe for losses. 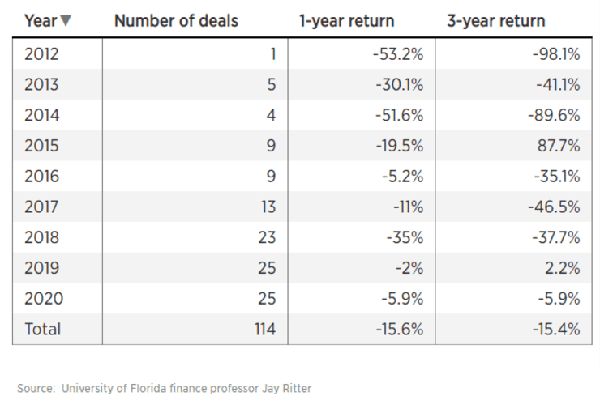 It’s the people who get in early who see the benefits. You know, the managers who form them and the super-wealthy clients they sell them to.

That’s who makes money off SPACs, not retail investors.

But according to Bank of America, about 46% of the trading activity in SPACs in January was done by retail investors.

To put that into perspective, overall, Citadel Securities estimates that retail investors account for about 20% of daily volume in the stock market. The other 80% is institutional money. So what does it make you think when you find out that SPACs have twice as many “unsophisticated” investors as your average publicly traded company?

To me, that says the point of SPACs is to trick retail investors into giving their money to billionaires.

You see, investors seem to be getting lulled into a false sense of security. They’re told that if a SPAC doesn’t find a merger target by the deadline, they can get their investment back plus interest.

But that only goes for the people who invested in the SPAC before it went public. Everyone who buys it on the open market (where retail investors spend their time) has no right to anything but whatever they can sell those shares to someone else for.

So when Bill Ackman or Chamath Palihapitiya create a SPAC and push it on you, it’s because you’re making them richer. It’s not because they want to see you succeed.

It’s the opposite of trickle-down economics. Instead of one large sum trickling down to be split among millions, it’s millions of small sums trickling up to be hoarded by one or two billionaires.

But it’s entirely legal. Let the buyer beware. If you want to pay me for garbage, there’s no law that says I can’t sell it to you.

It reminds me of an Australian gentleman who got his 15 minutes of fame by listing free McDonald’s coupons for sale on his country’s early version of eBay.

He didn’t pay a dime, just like Ackman and Palihapitiya, but he was more than willing to sell them to you for one — again, just like those smarmy billionaires pumping their stocks on Twitter.

This article may be coming to you a little late. As of today, the Defiance Next Generation SPAC Derived ETF is down well over 20% from its mid-February peak (bringing it to about a 6% loss for the year). 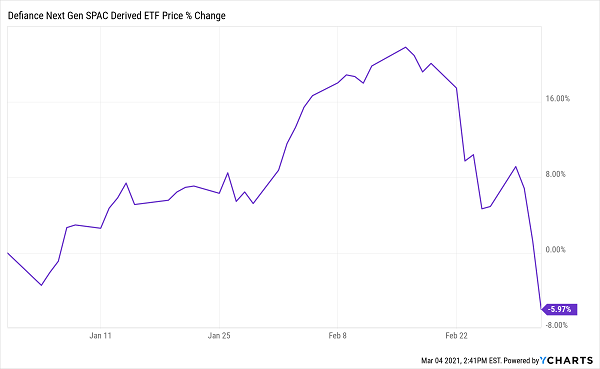 But while the selling may have started, it is by no means over. There just aren’t enough quality private companies out there ready to list on the public markets.

There are 370 SPACs out there with over $118 billion looking for anything to buy.

The more mergers they announce, the worse the quality of those deals is going to get.

So do yourself a favor and stay away from those SPACs until you see what kind of company they’re going to buy.