A Simple Trick for Understanding the Power of Gold

And yet, there are still people who don't understand exactly why it's so special.

So, in these cases, I always refer back to a little mental exercise that gets the point across in less than 30 seconds.

For one ounce of gold, or $21 in cash, you could buy yourself a fine three-piece suit.

Flash forward to today. That ounce of gold, which was worth $1,877 this morning at 9 a.m. EST, would still buy you a fine, custom-tailored suit.

What would $21 in cash buy if you took it to the store right now?

It's a stark contrast but an effective way of perceiving both the stability of gold as well as the massive loss in value that currencies endure over time.

In the last 100 years, every dollar in circulation lost more than 90% of its value.

Gold, on the other hand, stays just as solid as the bars stacked ceiling-high at Fort Knox and the New York Federal Reserve.

At certain points in history — such as where we are today — it actually starts outperforming not just the world's reserve currency, but also most other mainstream investments.

So, why now? Why has the world's oldest, most stable store of wealth suddenly made a dash towards all-time highs?

Just as gold is at record highs so, too, is social instability.

For people who remember the LA riots, and even those old enough to remember the turmoil of the 1960s, all of this is especially terrifying because it's not just happening in one place.

It's happening everywhere, across this country and overseas. The whole world, all at the same time, seems to be having an emotional tantrum.

It's this sort of chaos that grips humanity when a reigning world power goes into decline. Sadly, this time, it's us.

We've Had a Good Run

And right along with American society, America's financial brand — the dollar — will soon finish out its eight-decade tenure as the world's reserve currency.

The gold market has been responding appropriately, just like it did during the last financial crisis. 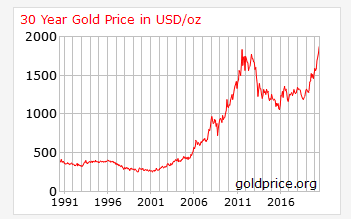 Every wise investor I know is growing his position.

How high will it go? Well, two things need to be considered when trying to figure that out.

First, we look at gold's baseline price since the post-financial crisis correction — the time of stability after all the momentum traders and emotional hoarders finished selling off the positions they built during the manic buying of 2008–2011.

That's where the market wanted to be... before the insanity of the last six months took hold.

So now you look at the second factor: Just how big of a mess are we in?

From the looks of things, this may just be the beginning... Everything you're seeing today will likely be nothing more than a dress rehearsal for what happens after the presidential election in November.

Worst of all, that's the end result no matter the outcome. We will see accusations of tampering and fraud and an overall escalation in inter-party paranoia and distrust no matter which party comes in second.

We will see fear mongering on every other level... and we will see the public's reaction.

And each headline, each video shot on a smartphone, every celebrity tweet will carry gold prices higher.

Now, referring back to recent history, gold doubled in the wake of 2008.

But if things continue to deteriorate as they have been this summer, we could see far more demand in the gold market, maybe enough to drive prices to $3,000 an ounce or more.

Like I said, every wise investor I know is building his position... But with so many choices for how to invest in gold, what do you do?

Do you buy bars and store them in a floor safe at your house?

Do you buy gold certificates and let somebody else store the bars for you?

Do you go into a leveraged ETF and pray that a random, momentary 3% downturn doesn't tank your position?

Extracting the Most Profit From Every Ounce

Well, if you're an investor looking to maximize the bang you get out of your shiny gold dollar, you go straight to the source.

Mining companies, which extract, refine, and produce the metal, are having a bull market like never before.

Profit margins are going through the roof for those that, just a few months ago, were operating close to gold's market value... and so are share prices.

There has literally never been a better time to buy.

Click here to find out about a gold stock that's perfectly positioned for these market conditions.