Can sentiment toward crude oil get any worse?

It has become an article of faith that the world is hopelessly and unavoidably awash in oil and that the relentless growth of U.S. oil production — along with the Saudis' amateurish attempts to control OPEC's production growth — will keep crude prices from ever clearing the $50 a barrel level, much less returning to those $80–$100 numbers that marked oil's heyday.

For the record, I am one of those who believe the future for oil prices has fundamentally changed. And yes, it's largely due to U.S. oil companies and their amazing ability to innovate and adjust to a lower price environment.

Just a couple years ago, it cost U.S. shale producers around $60 a barrel to get crude out of the ground. The Saudis were well aware of this cost basis, and that's why they boosted their own production at the end of 2014. In much the same way that Amazon or Wal-Mart uses price to crush the competition, the Saudis thought getting the price below $60 would crush U.S. oil production.

They were right, to an extent. Over 100 U.S. oil companies went bankrupt, and the U.S. stock market got hit as fears about banks' exposure to high-yield bonds (roughly a third of which were oil-related) made the rounds.

Of course, the Saudis aren't capitalists, so they don't understand that old saying that necessity is the mother of invention.

U.S. oil companies had to cut costs to survive, and they did. Shale costs have been cut in half, to around $30 a barrel. The renaissance in the Permian Basin might even be more miraculous — drillers are applying new techniques to abandoned wells and getting a 91% return on their money. That puts the costs below $20 for Permian oil. And there's more than 40 billion barrels of recoverable oil.

The U.S. is now the third-largest oil producer in the world, after Russia and Saudi Arabia. And there isn't much that can impact that production. So it's easy to see why many people think it's impossible for us to ever work off the incredible amount of oil we have in storage right now. It's also why I don't think oil prices will trade much above $60 anytime soon.

But with that said, you have to pay attention when sentiment gets so one-sided, like it is with oil right now.

The stock market is like the world's biggest poker game. And if you know anything about poker, you know how important appearances are. If you have a great hand, you want people to think you don't because you'll make more money if everyone's betting against you.

Right now, three of the biggest mutual fund/ETF companies are up to their eyeballs in ExxonMobil stock. All together, BlackRock, Vanguard, and State Street own over 765 million shares of Exxon, worth around $62 billion.

About a month ago, in a shareholder vote, these three heavyweights passed a measure requiring Exxon to release periodic studies about how climate change will affect Exxon's business. In essence, they said, "We are worried about the future of oil, and we want you tell us what you see coming."

And they did this in a very public way, so everyone knows they are worried. If these companies are holding such a bad hand, why on earth would they telegraph it like this?

It's because this is how Wall Street operates. It's called "talking your book," and it means you only express opinions that help you achieve you investment goals.

For instance, if you want to buy a particular stock, do you tell people how great the company is? Or do you suggest that things aren't so great for the company? Yeah, you probably keep your bullish opinion to yourself so other investors don't run the price higher. But once you've bought a bunch of the stock, then you start going on CNBC and writing articles about how great the stock is.

Ironically, Raymond James analysts just released a research note to their clients that says there's a lot of fake oil news out there:

While the label "fake news" has gained recent political popularity, the simple reality is that we think some oil price headlines have been misleading, or outright wrong, and they have distracted investors from what we believe is fundamentally a bullish overall picture for oil.

The Changing Tide of Fake News

Now that we've had a news cycle whip oil sentiment into a massively bearish frenzy, the Wall Street playbook calls for a reversal. And there are a couple items from this Raymond James report to notice. First, the myths being spread (and they gave us a nice graphic for them): 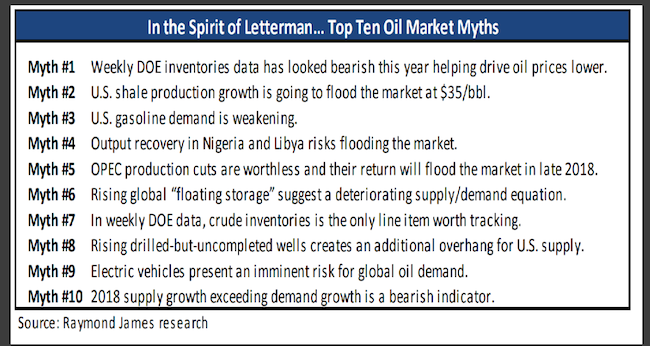 Now, I'm not going to take each of the myths on right now. But I do want to address one in particular that has been particularly influential: oil inventories.

I keep checking analyst earnings estimates for Laredo Petroleum (NYSE: LPI). They basically aren't changing even though oil prices have been weaker than expected. Laredo is a profitable oil company working the low-cost Permian Basin. Its current forward P/E is 14, and it has a PEG ratio of 0.5.

If Raymond James (and me) is right, the news cycle for oil is about to shift gears to a more bullish tone. Laredo is probably a pretty good idea right about now.