By now you probably know that Amazon.com declared its intention to buy out organic grocer Whole Foods for $13.7 billion. That buyout price was decent, about 27% higher than the previous day's close.

But the price wasn't what was so surprising. It was the simple fact that Amazon is buying a pretty mature brick-and-mortar retail business. Near as I can tell, exactly no one saw this deal coming.

Because Whole Foods is not just any brick-and-mortar business. Amazon bought the most expensive one. It seems a very un-Amazon thing to do.

Whole Foods was basically the first mover in organic grocery stores. It got big when organic food was still very expensive. Whole Foods could charge its affluent customers a nice premium. That's how it got its nickname "Whole Paycheck." But it's also how Whole Foods sported crazy good profit margins for years. 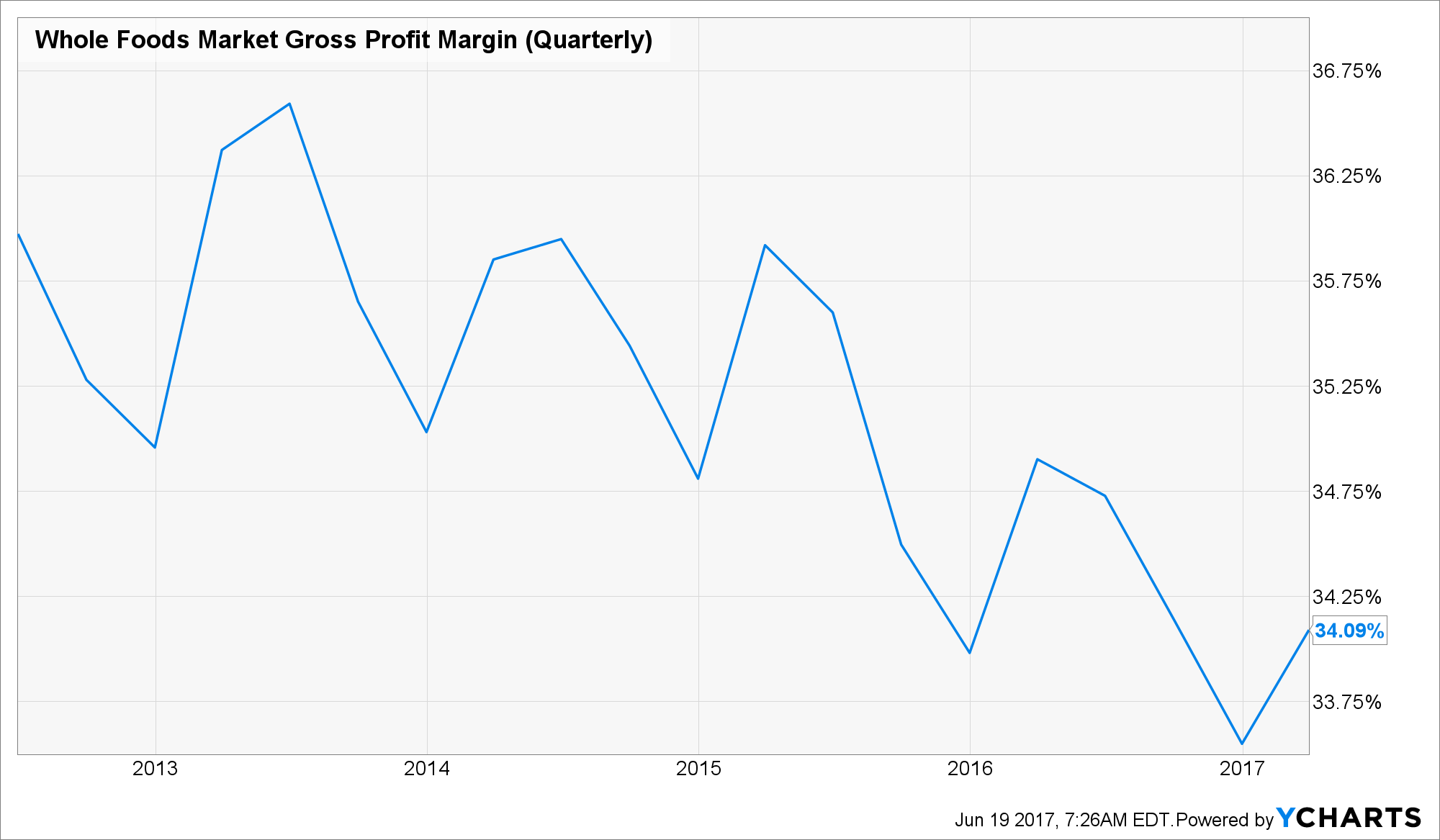 The thing about crazy good margins is they almost never last. This is what capitalism does: It knocks off the exceptional and levels the playing field. So, a company that pioneers a certain market often has a limited time to bask in its first-mover advantage before the competition sets in.

In the case of Whole Foods, it's getting competition for organic food sales from every side — Wal-Mart, Kroger, Albertsons, Weis, Sprouts, and so on. Consumers have more choice, which is why its profit margins have been falling.

But here's the thing: In the first quarter of this year, Whole Foods' gross profit margin was just over 34%. Kroger's gross margins were 22%. Weis Markets' comes in at 27%. Sprouts has the next best margins at 29%.

This is an important distinction. Consumers have expectations about brands. You wouldn't offer to meet a business contact at a Dunkin Donuts, but it would be perfectly fine to meet at a Starbucks. No one goes to Wal-Mart for top quality — people shop there because it's cheap. And people don't go to Whole Foods looking for bargains.

All this makes Amazon's move curious. I don't think many investors expected Amazon to buy its way into a market. Amazon isn't a dealmaker; it's a conqueror. If it sees a market that's vulnerable, it goes on the attack and basically takes what it wants. It did it with books, killing off Borders and crippling Barnes & Noble.

It did it with electronics, killing off Circuit City and RadioShack and very nearly doing the same to Best Buy. And it's in the process of rewriting the script for department stores like Macy's.

So why would Amazon shift its strategy and buy its way into the grocery market?

I think there are a couple reasons.

First, there's that brand name. Whole Foods does command a premium for its goods. And at the $13.7 billion purchase price, Amazon gets nearly $16 billion in trailing 12-month revenue, along with ~$400 million in net profit. So from a value perspective, it might be a little expensive, but it's not outrageous. And Amazon has the cash to make the deal.

Then there's the fact that Amazon has already taken steps to enter the grocery market. So the move to acquire Whole Foods amounts to a big leap right into the thick of it. After all, time is money. Amazon probably sees the Whole Foods acquisition as an opportunity to avoid a bunch of mistakes, save time building out a supply chain, and get on with its mission to take over the world.

Like I said earlier, exactly no one saw this deal coming. That's why all the grocery stocks got hammered on Friday. I'm sure most grocers thought they had some time as Amazon built out its grocery offerings. Nope. The baddest competitor we've ever seen just dropped into their midst, ready for full-scale battle. Grocery investors absolutely freaked out. Even Wal-Mart was down almost 5%.

Finally, there's Amazon Prime. As I'm sure you know, Amazon Prime is a powerful offering and a weapon against its competition. It ensures a certain amount of customer loyalty because it's such a good deal. I can't tell you for sure that Amazon will add some kind of food delivery or discounts to Prime, but it's a pretty good bet.

I've already seen some analysts put forth the idea that Amazon will add some kind of rewards system to Prime. Like, you spend a certain amount on Prime, and you get rewards you can apply to organic food purchases.

But there's a lesser-known service at play here that I think is right up Amazon's alley.

You see, there's a new company making its initial public offering (IPO) today: Blue Apron. Blue Apron is a meal kit delivery company. You pay a monthly fee, and you get a meal kit with everything you need to make dinner for two or four. My girlfriend and I used the service for a little while and it was really good.

Blue Apron goes public today between $15 and $17, valuing the company at about $3 billion.

Well, Whole Foods has been working on its Blue Apron-type service. And I feel pretty confident saying that this is a major reason Amazon targeted Whole Foods to begin with. Not only does Amazon get the Whole Foods name, stores, and supply chain, but it also gets a perfect new delivery service that it can use to make Amazon Prime an even better value than it already is.

And the timing? Holy crap, Amazon declares war on Blue Apron and its $3 billion valuation the day before it goes public? It's like Game of Thrones on the stock market, and Amazon is the Lannisters.