According to the New York Stock Exchange (NYSE), a "blue chip stock" is stock in a corporation with a national reputation for quality, reliability, and the ability to operate profitably in good times and bad.

Seems like a pretty good idea, owning stocks that always make money regardless of the economy...

But of course, simply owning a blue chip is no guarantee of success. There are other factors that will determine if a particular blue chip stock will be a good moneymaker for you. Like, at what price did you buy the stock? Did you buy it when the stock was cheap? Any company goes through ups and downs. Buying a blue chip stock when there are questions about its growth often means you are buying at a good price.

I would point to Microsoft as a good example of a company that had some serious questions around it. A couple years ago, sales of Windows were lagging. Investors were worried that there was a huge threat coming from the "cloud." And computer sales were slowing, so there was reasonable concern that Microsoft might be in trouble. So for two full years — 2010 through 2012 — Microsoft traded between $25 and $30 a share.

Today, Microsoft trades at $57, roughly double what it was just a few years ago. Apparently those growth concerns were misplaced.

And speaking of growth, is there any at the blue chip you're buying? If you can get a good handle on the growth for a company, you can check another important criterion off the list. And it's a bonus when you can identify growth that others are missing.

There are a couple other questions you might want to ask. Is there upside for the dividend? How's management doing? Are they innovating and driving growth for the company?

With all that in mind, there is one blue chip stock that answers all these questions. This company is an iconic brand, investors are questioning the company right now, but I see a clear growth path. Management is aggressively innovating. And there is a lot of upside for the dividend payment...

There's no doubt that Disney is among the world's most recognized brands. It owns ABC, which includes the ESPN sports network. It's got the theme parks. It owns powerhouse movie franchises Pixar, Star Wars, and Marvel. Here's a breakdown that shows how each segment contributes to growth: 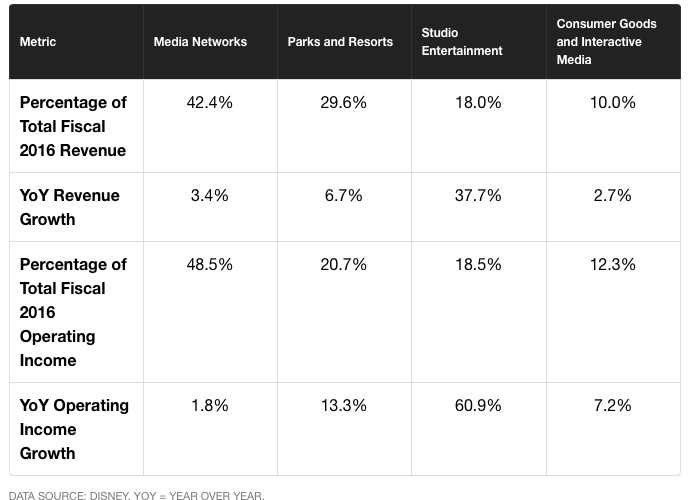 As you can see, Media Networks is the most important segment for Disney. This division includes ESPN and the Disney Channel, as well as its investment in Hulu. And as it happens, this is also the division that investors are questioning right now.

Cord cutting is what you call it when people stop buying bundled TV packages from their cable company. It's kind of a big deal. People don't want to pay $60, $80, or even $100 a month to Comcast for TV shows when they can find cheaper alternatives like Netflix.

For Disney, this means the number of people getting ESPN right now is falling. And since such a huge share of Disney's revenue and profits comes from ESPN, investors are worried. That's why Disney shares currently trade with a forward P/E of just 15.

The truth is, cord cutting is a bit of an issue. But even with the decline in ESPN subscriber numbers, Disney has missed quarterly earnings estimates just once in the last year. And analysts still see the company growing around 11% a year for the next few years.

That's not bad. And in fact, I think those growth estimates are too low. And I'll tell you why...

The Upside for Disney

Where many people see a challenge for Disney, I see an opportunity. Right now, Disney has around 90 million ESPN viewers. That's down from around 100 million. And they pay as much as $7 a month for the sports network. That's a lot of loot. But is it reasonable to think that Disney could attract more viewers for ESPN — and more money — if it could offer the sports network direct to consumers, sort of like how Netflix does?

In its last quarterly earnings call, Disney revealed that it has bought 33% of Major League Baseball's BAMTech.

BAMTech was literally the first company to offer the live streaming of anything online — two years before YouTube existed, and four years before Facebook exploded onto the web. The technology has increased by leaps and bounds, and now you can stream live games on your phone, tablet, Mac, or PC.

And the best part is that it’s a serious revenue generator. You can buy a season package for all 30 teams, or even pay by the game for the home-team games that aren’t broadcast in your area. MLB was the first to come to the plate with anything like this, and it's still known as the best.

It's pretty easy to see that Disney is going to offer ESPN direct to consumers via the BAMTech platform. I think this will be a huge moneymaker. Disney could cut the average price for ESPN and attract millions more viewers. Or it could offer a full Disney Channel that includes movies on demand, TV shows from Hulu, and ESPN. However you slice it, there is opportunity here.

ESPN aside, everything else is going gangbusters for Disney. Its movies are killing it. There's a new Star Wars movie, Rogue One, coming this December. It's a no-brainer that it will do well. And the next movies from Marvel will do well, too.

But one thing I'm really looking forward to is the success of Shanghai Disney. The newest theme park just opened this summer, and attendance numbers look fantastic. One million Chinese have already visited. The hotels are at 95% occupancy. And estimates are that 50 million people will visit in the next year. That's just about how many people visit all four of Disney's theme parks in Orlando every year.

And the thing is, Shanghai Disney will introduce Chinese to the Disney movies, thereby boosting revenue for the next Star Wars and Marvel movies...

Right now, Disney is paying $1.42 a year in dividends. That's just 25% of its earnings per share, pretty low on the scale. Disney's dividend is going to be hiked. My best guess is that the announcement will come when Disney announces fiscal 2016 numbers on November 10. You could wait to buy the stock then. But I bet you the shares will be higher than the current price around $94. I have a 12-month price target of $130.

The #1 Chinese Stock
Investors are starting to think that China may be on the verge of another round of expansion. And that is very significant.
3 Virtual Reality Stocks to Buy Today
These three blue chip firms are betting big on virtual reality.
The Top 5 Dividend Stocks
There is just one way to guarantee that you make money with your investments: buy stocks that pay dividends. Briton Ryle shares his top 5 dividend stocks.
Buffett's Envy: 50% Annual Returns, Guaranteed
Warren Buffett once told investors at an annual shareholder meeting, "...it's a huge structural advantage not to have a lot of money. I think I could make you 50% a year on $1 million. No, I know I could. I guarantee that."