Among the elements of the universe, lithium is a real lightweight — the third lightest of them all with an atomic weight of 3, right behind helium at 2 and hydrogen at 1.

But as one of the most conductive metals in existence, lithium is a true heavyweight in the field of energy storage and battery design.

In hot demand as the chief ingredient in batteries where power and long life are critical — such as in electric cars and aerial drones — lithium is rapidly becoming one of the hottest commodities to invest in, driving multiple market segments from mining to manufacturing to advanced electronics.

Unfortunately, that hot commodity may be too hot to handle. It has been known to spontaneously combust, causing its batteries to fully discharge all of their stored energy in a flash — literally. We’ve all seen those YouTube videos of Tesla Motors’ electric car going up in flames when its lithium battery was punctured by road debris.

Will the explosion in lithium production and uses continue to make it one of the most promising commodities to invest in? Or will the literal explosion of its batteries cause its prospects to go up in flames?

Two important characteristics of lithium make it extremely sought after as the chief material in batteries:

Combine these two characteristics, and you get an awful lot of electric power packed into a small space that is extremely light — perfect for powering everything from cell phones to tablets to cars to drones, which demand power and long battery life without adding a lot of weight.

Yet lithium has other characteristics that make it a little temperamental to deal with:

Thus, a simple puncture of a lithium battery’s protective casing can cause lithium to explode as it comes into contact with air and moisture, producing toxic and corrosive fumes and fires that are difficult to extinguish, requiring dry powders to put out. Quite the negative publicity, which has been readily brought to the public’s attention thanks to viral videos of burning cars.

Yet manufacturers are already finding ways of improving even this newest of technologies.

Keeping an Eye on Ions

While lithium batteries are pretty much the best one-time-use power cells on the market, it’s the reusable, rechargeable lithium-ion batteries that are most used in consumer devices from phones to music players to tablets and now even autos. In 2013 alone, over 5 billion lithium-ion batteries were sold to consumers, with demand soaring by the year.

To make ion batteries a little safer, manufacturers have replaced the lithium cobalt oxide with either lithium iron phosphate, lithium manganese oxide (one oxygen atom as opposed to dioxide’s two atoms), or lithium nickel manganese cobalt oxide. This latter one (NMC) is the favored configuration for electric cars.

The need for NMC batteries is so huge that Tesla Motors announced last month that it will build its own lithium battery factory — the world’s largest. The company is gearing up to begin production of its next generation electric car in three years’ time, and it doesn’t want any battery shortages to interfere with production.

As the ever-increasing production of portable consumer devices, electric cars, and even electric military equipment will dramatically increase the demand for lithium-ion batteries, lithium may well provide investors with an investment opportunity of a lifetime. 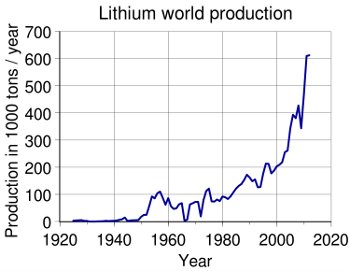 Luckily for manufacturers, mining lithium is relatively inexpensive, especially at brines in high mountain plateaus, where lithium coats the surface of the ground after the sun has evaporated the water from the deposits.

Because miners can simply scrape lithium off the surface of the ground, brine excavation is just about the only lithium extraction game in town, with actual hard rock mining of lithium priced out of the market by the brines.

If you want to stake a claim on some of these future electric energy material providers, you could try:

Although there are already some experiments being conducted on even newer battery technologies using magnesium-ion cells instead of lithium-ion, still more powerful batteries than magnesium cells are sticking with lithium — including lithium-sulphur and lithium-oxygen combinations.

Given its light weight, ease of chemical reactivity, and inexpensive extraction and production, you can bet on lithium powering cell phones, laptops, tablets, cars, drones, and all the other new gizmos the next generation of techies will invent.

In fact, lithium presents us with a rather longer-term investment opportunity compared to most technologies. By investing in materials that are used across multiple technologies rather than investing in an individual device or brand, we avoid the short-term crashes that come from a company or product that has suddenly been made obsolete by a competitor.

While electronic consumer products and companies come and go, lithium will remain as the product that will power them all for decades to come. This featherweight packs a powerful punch.