Why Invest in Robots?

You've probably heard robots are the wave of the future.

I'm here to tell you exactly why they will dominate six major sectors of the market.

I guarantee you'll be hard-pressed to find a single reason not to invest in robotics technology after reading this...

The robotics industry is an interesting field, to say the least. In the past few years, it has grown into a robotics revolution, as it is quickly becoming one of the most lucrative markets around. A $15 billion industry in 2010, it's expected to spike up to $67B by 2025.

Why such an exponential increase? There isn't one simple answer. In fact, there are millions.

For the purpose of this educational material, I am going to focus on the “big six.”

This will tell you everything you need to know in order to profit from the robotics bull market: 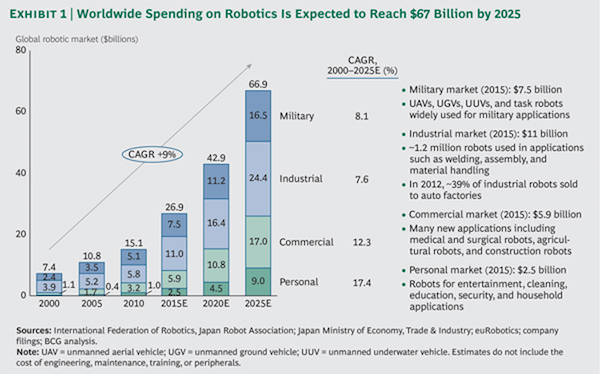 Trust me; before you know it, you will be working and living with robots. Instead of fearing it or trying to fight it, why not get ahead of the herd and profit from it?

If you've been paying any attention to the precious metals market amidst the potential collapse of our current fiat currency, you know there are serious risks to the gold and silver supply. But miners have recently visited the newest and largest-ever mining frontier: the vast ocean floor.

An Australian based company, Nautilus Minerals (TSX: NUS), has championed this new trend, as it sends robots with enhanced technology to drill for metals under the sea. Papua New Guinea, near Indonesia, is one of the latest hot spots, proving to be a prime mining location... if you're on the seabed, that is.

Neptune Minerals is another corporation, based in Nevada, dedicated to seafloor massive sulfide (SMS) minerals exploration and extraction.

Surgical robots are predicted to greatly enhance efficiency and quality when it comes to medical treatment in hospitals. Additionally, hospitals will be able to cut some long-term costs by using these complex machines.

Although the price tag for a robotic surgical system isn't cheap — they cost a million dollars or more in many cases — the long-term cost-to-benefit ratio has led to a surging interest in robotic surgery in recent years, incentivizing hospitals to make the transition.

The technique allows the surgeon to stay in control by overcoming previous limitations while ensuring a minimally invasive surgery for the patient.

The trend is quickly catching on. The George Washington University Hospital has already performed nearly 3,000 robotic procedures. Considering the very first major robotic surgery took place in May of 1998 — a heart bypass at the Leipzig Heart Centre by Dr. Friedrich-Wilhelm Mohr — this is extremely impressive. In a decade and a half, robotic surgical systems have been used successfully in hospitals all over the world.

Imagine what the statistics will look like in another decade?

I'm willing to bet robotics-assisted surgeries will soon be the norm...

If you have kids or grandkids, you may be able to rest easier at night knowing your loved ones are letting robots drive their cars. Texting and driving may soon be a fear of the past.

And you might benefit from having a robot car yourself. Robot cars will optimize your fuel economy, lower auto-insurance bills, and take the stress out of commuting and traveling.

Google's autonomous vehicles have safely driven 700,000 miles. Audi, BMW, and Volkswagen have tested their own models of robot cars, with good reports as well.

Manufacturers feel robot cars will eventually dominate the automobile industry because human error is the number one cause of automobile accidents and deaths. Every year, 1.3 million people die in traffic accidents. Another 20-50 million are injured from related accidents, according to the World Health Organization. At least 30,000 of those deaths take place in the United States... every single year.

Sebastian Thrum, the man who helped build Google's driver-less car, was inspired by the loss of his best friend to a traffic accident when he was 18. The friend didn't pay attention for a fraction of a second. That's all it takes.

That being said, here are three reasons why your robot car will be a better driver than you:

Some experts have speculated that eventually, it will be illegal for humans to drive the vehicles themselves.

Military planners are preparing for robotic warcraft and warfare in the near future. Aside from the ethical quandaries, the idea of robots fighting our future wars is quickly becoming an inevitability.

While Westerners seem to have the upper hand in this situation, it's still a fearsome factor because it will become quite easy to launch attacks. The robots can collect and process vast quantities of data in a short amount of time, while also being extremely mobile and difficult to destruct.

Recently, we've seen President Obama use his executive power to authorize the use of drones for surveillance — unmanned aerial vehicles (UAVS) — and also to kill suspected terrorists in foreign countries. The robot plane collects intelligence data without putting a citizen's life in danger. The aircraft is preprogrammed with mission requirements and constraints.

Time and health are two of the most precious assets a human being can possess. Understanding how valuable time is, Rodney Brooks, co-founder of pioneering iRobot Corp. (NASDAQ: IRBT), brilliantly innovated a robot that does a tedious, time-consuming daily chore so you don't have to. He invented the Roomba®: a vacuum-cleaning robot.

Another robot, the Mint, hosts a bigger computer brain with sensors that map out the room to be cleaned with a micro-GPS system. The IR spot serves as the robot's GPS satellite. Evolution Robotics CEP Paulo Pirjanian said he wanted to take a leadership role in expanding the marketplace for consumer robots.

Prior imitators of the Roomba had failed in innovation and economics. Pirjanian believes the Mint goes above and beyond the original Roomba and will open up competition and growth in the consumer marketplace.

If you think this is a crazy addition to this list, hear me out...

Douglas Hines of True Companion LLC debuted the first-ever robot sex companion: Sex Robot Roxxxy. Depending on your mood, you can assign Roxxxy different personalities. Essentially, you can tweak the personality and use the website sync to update new features or sexy quirks. The company has designed the website like an online video game or newsletter, with a monthly fee if you wish to use it with your robot.

Estimations project that the development cost about a million dollars, and the robot itself is priced at $7,000 to $9,000. True Companion asserts that this sex robot is more than a robot; it's a mate for people who do not have one — or who prefer not to seek one.

Regardless of how you feel about robots now, there's simply no reset button when it comes to technology. That can be both a blessing and a curse. While many people are still shying away from robots simply out of fear, you don't want to be one of them.

Through great innovation and progress, the robotics industry will quickly take the world by storm as it explodes into virtually all aspects of our daily lives.

If you're smart, you'll take advantage of the opportunities that await in this ever-growing market that's directly correlated to precious metals, medicine, defense, the auto industry, and, yes, even sex.

Investing for the Future

As robot technology progresses, there will be more and more opportunities to invest. But like with any investment, the earlier you're in, the better.

The experts here at Wealth Daily have put together a research presentation on Jeff Bezos's 'big bet' on artificial intelligence.

You can view the video presentation here.

If you do not wish to view the presentation in video format, we have a written transcript which has all of the details and research.

You can read the written report right here.

In the very near future, robots will be everywhere. Between artificial intelligence and industrial robots alone, smart investors stand to make some life-changing gains. We highly advise you to at least view/read the report.

You have nothing to lose but opportunities.