Every major infrastructure in the United States is tied to electricity. Without it, life as we know it would cease to exist.

In a matter of minutes, our connected civilization would be catapulted into the dark ages.

How is it possible?

Unfortunately for mankind, there are two impending sources of electromagnetic pulses:

In just a single second, the Sun churns out more energy than has been used in all of human civilization.

The Sun is capable of generating natural electromagnetic pulses that could easily surge our electricity grid, causing continent-wide blackouts.

The largest and only star in our solar system, that yellow dwarf that keeps us warm, may very well also be the cause of our societal downfall.

Coronal mass ejections, better known as geomagnetic storms, occur naturally on the surface of the sun every year. The ejections interfere with our planet’s magnetosphere, resulting in dramatically increased electric current. The electricity grid on Earth turns into a glorified antennae, picking up the surge in current.

The solar flares ejected from these storms have the same mass as Mt. Everest--flying out of the Sun, through space, towards Earth at over one million miles per hour.

Usually, these mass ejections strike the Earth’s magnetosphere at higher latitudes, and lack the power to be classified as catastrophic...but not always.

In 1989, the Hydro-Quebec Storm blacked out half of Canada for an entire day, and resulted in billions of dollars in economic losses.

In 1859, a superstorm known as the “Carrington Event” wiped out all telegraph communications and destroyed the newly constructed Transatlantic cable. The event is considered one of the greatest natural events to occur in the last 150 years, and was 100 times more powerful than the storm in Quebec. Fortunately, civilization was not yet dependent on electricity.

If a storm with the same magnitude as the Carrington Event were to strike the Earth today, worldwide grids would collapse. Billions of lives would be put at risk.

Recovery, if at all possible, would take decades.

NASA recently revealed that just three years ago, the Earth barely dodged another Carrington Event. A mass ejection with the same magnitude as Carrington missed the planet by just three days.

“NASA assesses that the resulting geomagnetic storm would have had catastrophic consequences worldwide.”

NASA also estimates that the likelihood of another geomagnetic superstorm increases by 12% each decade.

Let’s do the math here…

That 12% increase every ten years basically guarantees that within our lifetimes (or those of our children) the human population will be stuck by a catastrophic geomagnetic storm.

As if the risk for a naturally-occurring, catastrophic solar flare isn’t enough to think about, we also have an impending "No Contact War" on our hands.

Several enemies of the United States have added electromagnetic pulse weapons as integral strategies of their war plans.

Before we talk about the potential threat level we’re experiencing from these nations, let’s clear up two of the largest myths regarding electromagnetic pulse weapons:

Myth 1: A sophisticated thermonuclear weapon is needed to carry out an EMP attack.

Truth: Any nuclear weapon--even a primitive, low-yield atomic bomb that terrorists could easily build, would work. Radio Frequency Weapons, which have a smaller focus of attack than nuclear weapons, are as easy to assemble as a kitchen microwave.

Myth 2: A sophisticated long-range missile is needed to deliver an EMP attack.

Truth: Any warhead detonated as low as 30 km over the eastern half of the US would collapse the entire eastern grid, which supports 75% of US electricity.

To launch a nuclear EMP attack, it’s not even necessary for a rocket to exhibit any level of accuracy. The only requirement is that it be able to reach the necessary altitude.

It’s also important to note that the United States missile defense systems are deployed to counter missiles that approach from the north. From the south, our country is completely vulnerable to southern attacks.

North Korea currently possesses KN-08 ballistic missiles armed with nuclear warheads. The KN-08 is notorious for inaccuracy, but could easily be employed to launch a high-altitude nuclear EMP attack.

ISIS has been flaunting its recent acquisition of a Scud missile, which is more than capable of outfitting a nuclear EMP weapon.

Nuclear EMP attacks are listed as the ultimate weapon in the current military doctrines of Russia, China, North Korea, and Iran.

EMP attacks are not a new development. During the Cold War, Russia deliberately conducted EMP tests over Kazakhstan, purposefully wiping out the entire electricity grid.

“Once you confuse the enemy communication network you can also disrupt the world of the enemy command and decision-making center...you will, in effect, disrupt all the affairs of that country.”

An updated version of the classic siege strategy, each of these nations is preparing for a complete cyber operation, intending to defeat nations by blacking-out electricity grids and cutting off access to critical infrastructure.

“If the world’s industrial countries fail to devise effective ways to defend themselves against dangerous electronic assaults, then they will disintegrate within a few years...American soldiers would not be able to find food to eat nor would they be able to fire a single shot.”

North Korea and Iran have already practiced launching attacks using short range missiles launched from a freighter at sea, to the undefended southern of the United States.

The image below shows the affected area of a Multi-Megaton sized EMP weapon: 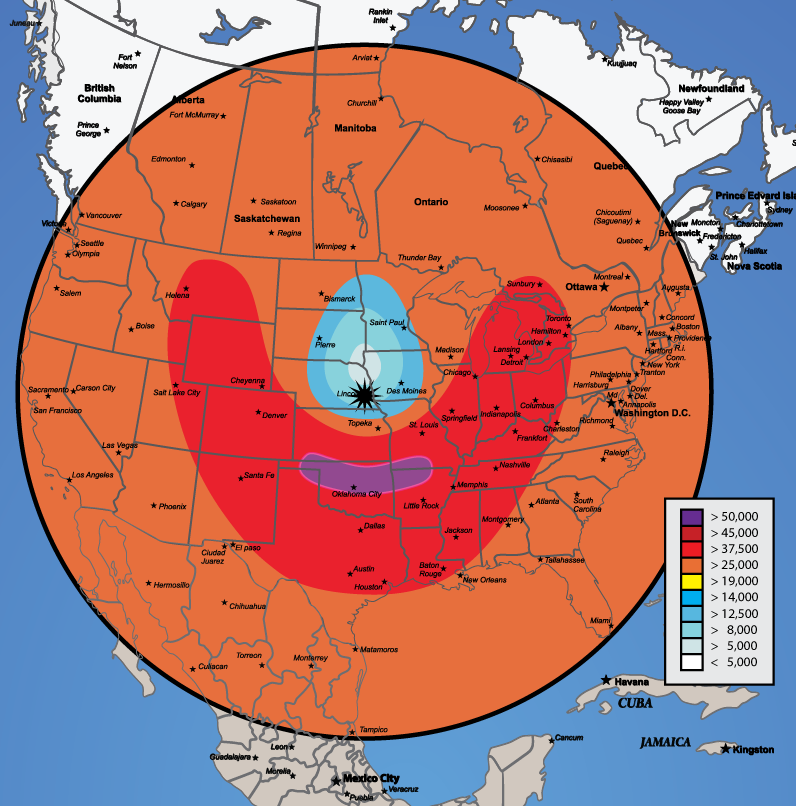 Even smaller weapons, at the right altitude, will impact more than half of the grid: 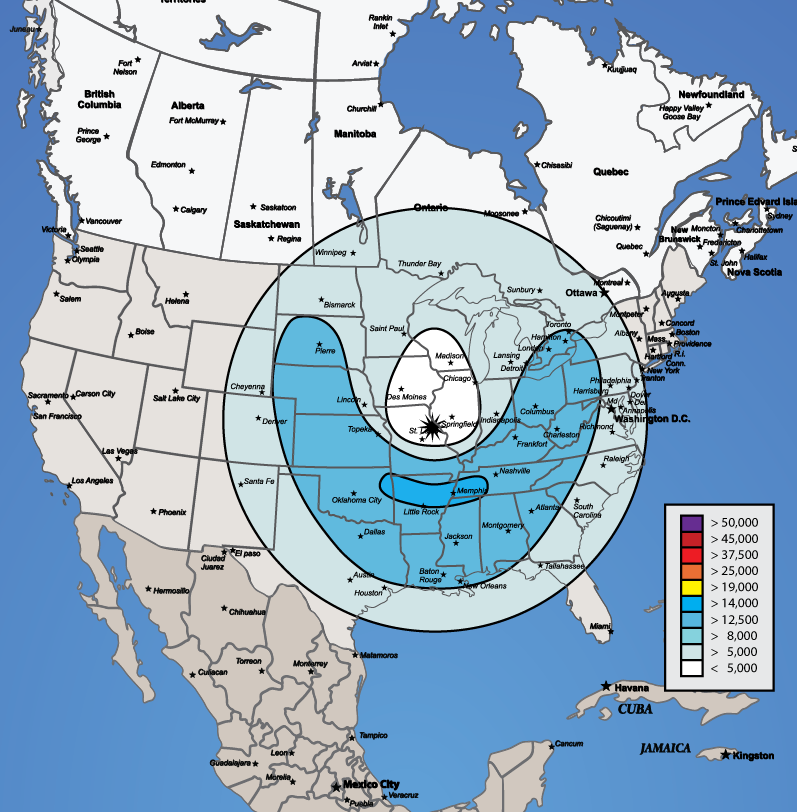 As recently as 2014, North Korea has been observed simulating EMP attacks against the U.S. mainland.

“The EMP problem is surely an existential threat to our society.  It can be done by folks who wish us ill and are willing to commit suicide to pull it off.  It would make 9/11 look like a piker and hundreds of millions of Americans could die.”  -Ambassador Hank Cooper

If any of these nations were to succeed, the entire infrastructure of the United States would crumble. We could not access money, much less control military operations. Even the most advanced military forces would be rendered obsolete.

So, we know for a fact that a handful of our international foes are currently developing and testing nuclear EMP programs.

We also know for a fact that Mother Nature herself could easily beat our enemies to the punch, and send a naturally occurring electromagnetic geostorm through our magnetosphere.

These two facts, combined with our society’s complete and utter dependence on electricity, put the American people in an alarmingly vulnerable position.

The United States government has ignored multiples reports about the threat of EMP weapons. It has repeatedly failed to enact meaningful legislation in defense of the grid, and we as a nation have no response plan for when (not if) the grid is jeopardized.

Despite our complete dependence on electric connectivity, we have no formal structure for protecting it. Civilian infrastructures do not fall under the jurisdiction of the Department of Defense. The Federal Energy Regulatory Commission lacks any official mandate for protection, or even protocol for after an attack.

Experts estimate that the total cost for the United States to establish a system of protection against an EMP attack is just $2 billion.

Iran is currently building an EMP shield for their own borders.

The North American Aerospace Defense command (Norad) is moving back into the Cheyenne Mountains of Colorado, to a hollowed-out bunker fit to withstand nuclear conflict as well as electromagnetic attacks. It’s a smart move on the part of Norad--they will be safe there.

But, what about civilians?

Even though the federal government possesses the technology and the finances, they are not taking action to protect you or your loved ones from complete societal breakdown.

So, you must protect yourself.

"Nine out of ten Americans could die from starvation, disease, and societal collapse if the blackout lasted a year." -Peter Pry, Director, EMP Task Force

This is not science fiction.

Fortunately, the private sector recognizes the looming threat of an electromagnetic pulse interference, and has developed products to help citizens and businesses defend against the fallout.

At the most basic level, an electromagnetic shield technique involves placing your electronics within a grounded, metal box. Electromagnetic radiation cannot penetrate metal. However, these boxes must be seamless (no doors or hatches) and possess a strong enough bond with contiguous contact between the metal pieces.

With proper sealing, a dangerous electric charge can be shunted to the ground, preventing the charge from breaching the magnetic field and affecting electronic housing.

In terms of protecting small equipment that can be unplugged or removed from a power source, a Faraday box is the most logical method. The Faraday cage is grounded to the earth, built to absorb and divert an electromagnetic pulse. Objects inside the box, if insulated correctly, will not be affected by an EMP. Faraday cages are available for purchase, or can be constructed at home. However, there are conflicting opinions regarding the effectiveness of homemade cages.

However, as with most electronics--there is a connective wire that carries voltage to and from the product. In case of an electromagnetic pulse attack, these wires can carry electromagnetic radiation into a faraday cage or other structure meant to protect electronics.

To avoid this taking place, wires will require filters, connectors, and shields.

Based in Tampa, Florida, Leader Tech, Inc. specializes in shielding products for circuit boards, interconnected cables, and electronic enclosures. Leader Tech engineers are able to tailor their shielding methods to your requirements. They are already involved with several contracts in the defense and aerospace sector--including the United States Air Force, Navy, and NASA.

Parker Chomerics has been developing Electromagnetic Interference protection devices since the early 1960s. The company offers conductive coatings, laminates, tapes, and the usual shield or absorbency products. Parker is also able to construct shielded windows and integrated displays, made of either plastic, polycarbonate, or glass.

If these products seem relatively simple to you, then you are correct.

Protection against a severe solar storm, or even a nuclear electromagnetic pulse attack, can be established rather easily and inexpensively.