Rare earth metals are essential for many of the technological advancements we rely on today. Gadgets from cell phones to laptops require them, as do hybrid vehicles and solar panels. Your television couldn't function without rare earth metals, nor could any of your batteries.

Rare earths are a group of 17 elements that are actually not all that rare; they're found in fairly high quantities in the crust of the Earth. But since the reserves are spread out and concentrated in very small groups, they're not so easy to acquire.

They are, however, in high demand — demand that is growing even greater as both high-tech products and renewable energy sources become more advanced and more popular.

And the world's supply is highly concentrated in one area: China.

China controls somewhere around 80% of the world's production of rare earth metals. While that's down from recent years, there is still cause for concern.

That's because almost 100% of "high-value" rare earth metals still go through China. Nearly all “high-value” rare earths have to be sent to China for value adding and refining.

The U.S. has its own supply of rare earth metals — about 12% of global reserves.

The problem is, mining and production of rare earth metals can be a highly pollutive process. Until very recently, China was more concerned about extracting and processing the metals than these environmental effects, and this is how it was able to grow into almost the sole supplier of rare earths.

But it was also this pollution China cited when it decided to reduce its export quota back in 2010. That year, Beijing's drastic pullback on exports sent prices sky high.

Over the last 10-15 years, world consumption and demand has increased by 8-12% per year.

Japan was the first to take the hit from these reduced rare earth supplies. China and Japan have always had a strenuous relationship, and land disputes were frequently triggers for trade issues. In 2010, the trigger for rare earth export reduction was a quarrel between a Chinese fishing trawler and the Japanese Coast Guard over a group of islands.

But then supplies were limited for the U.S. and the rest of the Western world, too.

The thing is, pollution was only one of the reasons China began to cut its rare earth supply. China was already the world's largest rare earth consumer, but an increase in domestic demand caused the nation to reconsider where its supply was going.

The World Trade Organization began investigating China's restrictions and diminishing quotas in 2012. In March of 2014, the WTO found that China had broken WTO rules. China cited environmental concerns for the restrictions, but WTO was not impressed with this line of defense.

And it's left nations around the world with two options: reduce dependence on rare earths or start mining their own.

The U.S. recently decided to take matters into its own hands. The Department of Energy provided Ames Laboratory with $120 million to create a Critical Materials Institute (CMI) lab, which would have three tasks aimed at moving the United States away from Chinese rare earth dependence, as outlined by the Department of Energy:

Asian nations, particularly Japan — the world's biggest rare earth importer — are also exploring other options. A number of Japanese companies are working with India Rare Earths to build a processing plant in Kazakhstan.

Kazakhstan is the world's largest producer of uranium, and amid the rare earth crisis, this has drawn interest. Rare earths can often be found in the waste byproducts of uranium mining — a fact that will likely make uranium mines an even more attractive location for rare earth producers in the years to come.

But the pollution of rare earth processing is still posing a problem. Many countries are reluctant to be the location for the processing plants, particularly amid the growing concerns of climate change and the radioactive contents of the waste.

Shortages are going to be a growing concern until the extraction and processing techniques can be cleaned up or until an alternative resource is found.

But high demand and short supply makes for lucrative market conditions — if you know where to look.

A number of rare earth mining and production companies operating outside of China are going to experience demand growth, particularly as China cuts its exports even more in the coming years.

Global demand will also continue its growth. Climate concerns and falling prices are making sustainable power sources like solar more popular and attractive options. High oil and gas prices could soon lead to even more popularity for hybrid and electric vehicles. And as schools are already trading in textbooks for tablets and children are receiving smartphones at younger ages, gadgets like these will become even more ubiquitous than they already are.

Every one of these things requires rare earths as part of the production process. Supply shortages from China will lead to skyrocketing success for other rare earth companies.

Avalon Advanced Materials, Inc. (AVLNF), based in Canada, is uniquely focused on rare metals and minerals spanning across six projects. Avalon holds a diverse rare metals and minerals property portfolio, offering investors exposure to lithium, tantalum, zirconium, rubidium, cesium, indium, gallium, germanium, rare earths and tin. Three projects are in advanced stages of development, although one REE project in the Canadian Northwest Territories has been put on hold for the time being. The company is also in development stages for a handful of projects, including the investigation a number of processes for the production of lithium hydroxide, now preferred in some battery cathodes because of better power density, a longer life cycle, and higher prices. 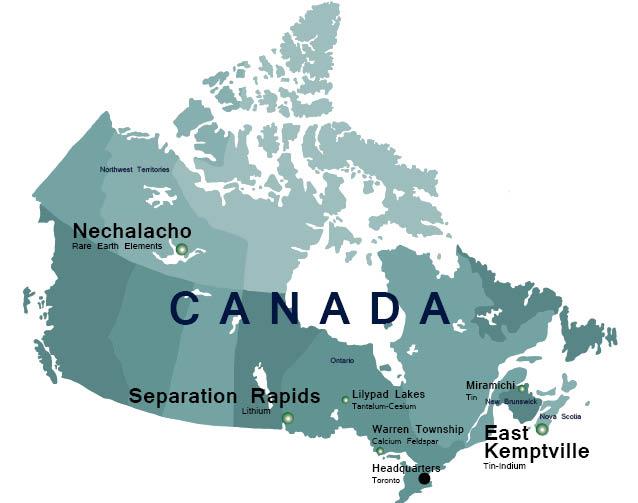 Tantalus Rare Earths is a German company developing a large rare earth opportunity in Madagascar. Tantalus has been exploring the area since 2008 and has obtained consistently promising results. As a result, the company is currently shifting the focus from exploration to preparations for production.

"Tantalus’ vision is to become an environmentally and socially sustainable rare earth supplier providing an alternative for rare earth users to the current dominance of Chinese supply. It is the Company’s established belief that the market is currently lacking such a supplier and that many rare earth buyers are waiting for Tantalus to provide material for the world market."

The company represents a challenge to the Chinese market domination, especially with low operational costs resulting from more advanced (and proven) extraction technology. Tantalus is especially rich in magnetic rare earths, the fastest-growing end use segment of the market. Quest Rare Minerals (QRMLF) is also based in Canda and is also focused on the $15 billion rare earth magnets industry, crucial to wind turbines, electric motors, and others. However, Quest's projects will not be in production phase for another 5-10 years.

Rare Element Resources (REEMF) is another exploration stage company focused on the Bear Lodge Property in Wyoming. REEMF has developed a proprietary technique to recover the most high-purity concentrates of rare earth products. Wyoming was ranked among the top ten Global Mining Jurisdictions by Canada's Fraser Institute in 2015. The company has also gained full endorsements from state legislature, creating an opportunity for state financing.

As always, be sure to do your due diligence before tapping into these and other rare earth companies, but rest assured the industry is likely to grow more now that China's quotas have tightened so much at a time when demand has nowhere to go but up.