If you’re reading this, you’re likely asking the multibillion-dollar question: “What is Bitcoin?”

Ready for a shocker? If you’d invested $100 in Bitcoin in 2010, your investment would be worth over $75 million today. 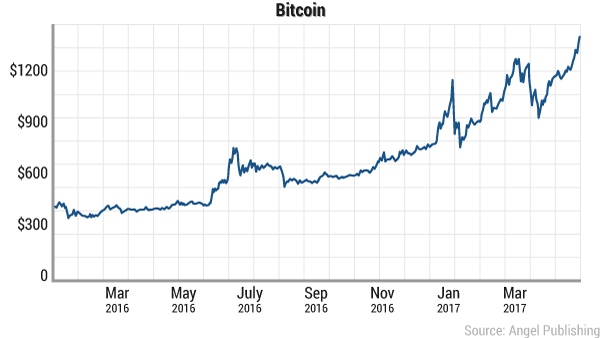 Just one glance at the chart above fills investors with regret.

But what makes such profits possible? These numbers seem hyperbolic, and many investors are quick to brand Bitcoin as a scam or Ponzi scheme.

In truth, Bitcoin does have traits that make it worth its valuation — at least in the eyes of federal governments, individuals, and corporations.

Bitcoins have the ability to act as a new currency and a store of value.

Plus, Bitcoin is a technology that fits into our improving global economy.

It makes the currencies that came before it look antiquated.

And this means that, even though Bitcoin is $2,700 as I’m typing this, there are many analysts who think this sum could be just a fraction of Bitcoin’s potential.

My name is Alexandra Perry, and I’m the research director at Wealth Daily.

Before that, I was a technology investor who dabbled in web development. Coupling these passions lead me to digital currency.

Today, my goal is to help you understand Bitcoin.

That means whether you’re interested in investing or are just curious about technology, you’ve landed in the right place.

Of course, you don’t need the knowledge that I’m about to offer you to make a profit. Like with all technologies, investors don’t need to understand the confusing inner workings of Bitcoin to see green.

But heck, if you’re here, you’re probably one of the responsible investors who are trying to understand where they’re putting their money.

I will do my best to help.

Over the course of this report, I answer the three big questions posed by novices just entering the Bitcoin community:

2. Do bitcoins have real world utility?

3. How can I start investing in Bitcoin as early as tomorrow?

Where Did Bitcoin Come From?

The white paper that proposed Bitcoin was published anonymously to the web. It was penned by an individual known as Satoshi Nakamoto.

That sentence reads like the start of a mystery novel. In truth, it kind of is...

No one knows who Nakamoto is. Many people believe that the name is just a front for a group of individuals.

Either way, the mind (or minds) behind the Bitcoin white paper proposed the token as the world’s first decentralized currency for individuals. The first line of the white paper reads:

A purely peer-to-peer version of electronic cash would allow online payments to be sent directly from one party to another without going through a financial institution.

Now to start, just the idea of a decentralized currency is novel...

In essence, a decentralized currency isn't backed by any government or national power. It isn't controlled by a single entity.

And we've never had a currency that didn’t flow from a federal government or banking system.

Bitcoin is completely maintained by individuals. In order for a transaction to take place in the Bitcoin network, an algorithm has to be solved by a miner. The miner that solves the algorithm is then rewarded with bitcoins.

And the internet clearly thought so. Within months, Bitcoin collected a cult following that was determined to promote and strengthen the digital currency.

And even today, long since Bitcoin’s anonymous creator disappeared from the limelight, that community continues to support and promote Bitcoin. But now it’s not just them. National governments have caught on. They are rushing to support and utilize Bitcoin and it’s surrounding technologies.

And this brings us to the second question: Do bitcoins have real world value?

If we’re looking strictly at function, then: Yes, bitcoins do have value. Bitcoin, as it was proposed, is actually the modernized version of the world’s oldest commodity, gold…

And, in that, it has all the same unique characteristics that have given gold value for hundreds of years.

Why is Bitcoin Valuable?

Many praise Bitcoin as the “new gold.” There are others who insist that Bitcoin is a new currency.

Both of those arguments considered, Bitcoin is a bit of both.

The bulk of Bitcoin investors hold bitcoins with the hopes that they will continue to increase in value. A very small faction actually uses bitcoin’s to make purchases.

Either way, Bitcoin has proven to be both a store of value and a functional currency. And its ability to do these things, and prevail over traditional currencies, lies in the underlying concepts proposed in the white paper.

Bitcoin protects against the following:

Hyperinflation. Like the world’s oldest commodity, gold, bitcoins are finite. This means that there can only be so much of them at a time. This prevents bitcoins from losing value the way that federal currency loses value. It also positions BItcoin as valuable in the same way that gold is valuable — it’s a hedge against economic turbulence and political uncertainty.

Security. Bitcoin operates on something called blockchain, with each transaction in the Bitcoin network being recorded in a block. This makes Bitcoin more secure than the fiat currency offered by our current financial systems. Investors don’t need to understand the complexities of blockchain (there are really only a handful of people in the world who do). They just need to understand it’s an incredible technology that increases Bitcoin’s security.

Fraud. Fraud is a big issue in the currency world. People replicate and produce fraudulent money all the time. But it’s nearly impossible to produce fake bitcoins. Because of the mining process that I outlined above, all bitcoins have to go through the same process to be introduced into the system. This means that, unlike other currencies, Bitcoin is pretty much fraud proof.

All these traits position Bitcoin to be an economic powerhouse. And, as the price testifies, many individuals have already seen this potential.

With their investment, they are hoping to secure a place in a new digital economy.

How Do You Buy Bitcoins?

Depending on whom you ask, there are a lot of answers to this question. We’ve surpassed the days when you could just buy bitcoins on craigslist.

Now, there are dozens of exchange that allow investors to buy and store bitcoins.

Out of those exchanges, two are frequently used for the purchase of bitcoins: Coinbase and Gemini.

Both these platforms are fairly easy to navigate, and setting them up isn’t much harder than setting up a run-of-the-mill Facebook account.

Bitcoins are also available on a range of altcoin exchanges.

For investors who are interested in navigating the world of Bitcoin, just sign up for our free newsletter Wealth Daily, and you will receive timely updates on a digital currency training service we plan to release in September.