How Harmful Is 5G?

The talk of the radiation that’s emitted from cellphones is nothing new.

I remember hearing tales of people developing brain cancer from constant use of their devices when I was only in elementary school. And this was back when cellphones were only starting to gain massive popularity.

Even back then, I’d wondered how much truth there was behind these sensational claims.

I’d been told many tales in my life by that point and found that some were true, some weren’t, and some you’d have to wait for the answer to be revealed.

I was an avid knuckle and back cracker, and I still am. I was told that by cracking my knuckles and back so frequently, I’d develop arthritis in my hands and have to visit a chiropractor regularly “by the time I was 25”…

Well, I’ve lived past 25 and have experienced no such pain in my hands and have never been to a chiropractor... yet.

So, having heard old wives’ tales before, I wrote off brain tumors caused by cellphones as just that: another old wives’ tale. After all, it’s way easier to hear something and believe it to be true than to do some actual research and figure out the answer on your own.

I figured that people had heard stories of cellphone users getting brain tumors. So, I didn’t think twice before I spread the misinformation...

Fast Forward to the Present

Every decade or so, our mobile networks get an upgrade. And we aren’t far from being completely immersed in the fifth generation (5G).

Each upgrade to the network comes with a long list of benefits to the cellular user. By upgrading mobile networks, they become faster in all aspects, especially download speed.

The further evolved the generation, the more reliable they are. This means fewer dropped calls, less dead zones, and an overall stronger connection.

Have you ever had a bunch of family or friends over at your house and notice that when everyone is using a device, the network becomes aggravatingly slow? That would no longer be the case.

A generational upgrade also results in stronger security. And that makes it harder for hackers to get into your device and leak any pictures you may have.

Remember the iCloud hackers who exposed hundreds of celebrities’ personal lives in 2015 and 2016? Think about the thousands of cases of normal folks like you and me that weren’t reported on in the news but still happened every day.

The likelihood of that happening is reduced astronomically as the mobile network evolves.

So, if the fifth generation of the mobile network has so many benefits, how could anyone be opposed to this makeover?

This is where the old wives’ tale of “brain tumor-causing phones” comes into play.

People are downright petrified of the amount of radiation that will come from this generational upgrade. And they believe it could cause cancer at a much faster rate than previous mobile generations…

A Brief Lesson in Radiation

Before we get into how harmful 5G is — or isn’t — we should go over the various types of radiation and identify which one we’ll be dealing with.

Radiation is energy, pure and simple, but can travel in two forms.

When an atom becomes radioactive, or unstable, it disintegrates. And that produces both particulate radiation and electromagnetic radiation.

Electromagnetic radiation is different in the way that it travels in waves and doesn’t have a body of matter whatsoever.

Those are two types of radiation. But more importantly, radiation is also broken down into two categories…

They are known as ionizing and nonionizing radiation.

Today, we’re only focusing on nonionizing radiation. This includes radio waves, microwaves, and lasers — among others.

There’s no need to talk about ionizing radiation since no mobile phones, or their networks, produce it — ever!

This means that it’s a non-ionized form of electromagnetic radiation.

The amount of energy, or wave frequency, emitted from electromagnetic radiation can vary from low to high.

This span is referred to as the electromagnetic spectrum: 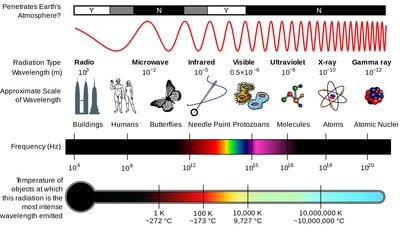 I’ve seen many comparisons of the amount of radiation emitted from 5G to that of microwaves.

For some reason, people think that microwaves are one of the most radioactive devices on the planet. But they really aren’t.

To put into perspective how radioactive 5G is, we’ll compare the wavelength of 5G to microwaves.

According to the fourth edition of College Physics by Raymond A. Serway and Jerry S. Faughn, the wavelengths emitted from microwaves vary from 1 to 300 gigahertz (GHz).

By the way, these are the same frequencies as your Wi-Fi and Bluetooth devices.

But of course, the microwave is much, much more intense than your Bluetooth or Wi-Fi.

Heck, if you put a big amplifier on your Bluetooth device, its radio waves would boil coffee, too!

It’s important to note that the microwave only emits radioactive frequencies while it’s on and running. And the same is true for a cellphone.

The current 3G and 4G frequencies average at around 2.6 GHz.

In addition to the normal mobile phone frequencies, 5G will also use some much higher frequencies.

The Federal Communications Commission (FCC) has licensed 28, 37, and 39 GHz for high-speed transmission, plus added capacity in the 60 GHz.

True, these are higher frequencies. But like we learned in our Bluetooth and microwave comparison, the intensity is our real concern, not the frequency.

You’re even exposed to radiation when you step outside because the sun emits radioactive rays. And if you stay out in the sun for too long, you’ll run the risk of getting skin cancer.

If you refer to the electromagnetic spectrum above, you might notice that humans naturally emit radiation. So, just because something emits radiation, that doesn’t mean it should be avoided at all costs…

The Case for 5G

The main cause for concern with 5G and radiation levels is with the mini-cell towers that would be erected throughout the country and cities alike.

For the fifth-generation mobile network to run in the manner it’s being advertised, there will need to be an upgrade to mobile infrastructure.

People are convinced that these new cell towers will constantly produce waves of radiation at devastating levels.

And even though the cell towers will constantly produce radio waves, just like the current towers do, they won’t be near the levels that people are under the impression they will be.

Being in constant contact with this radiation wouldn’t be healthy. But in moderation, it’s perfectly fine.

Like how using your phone constantly isn’t healthy but is generally harmless in moderation.

This is also the case with cellphones and 5G.

Even though it is possible to develop a brain tumor from using a cellphone, it’s extremely unlikely.

You’d have to abuse the use of your phone.

It’s like they say, “You can never have too much of a good thing.”

But if you’re still concerned about unwanted radiation, then you should get out there and push for 5G and do it now!

Earlier, you may recall I mentioned all the advances that came with each generation of the cellphone.

Well, believe it or not, they all came from underlying mathematics and engineering that goes into “the network.”

As the network got smarter, it could provide more services using the same, or even less, amount of cell signals than ever before.

The old 1G phones had much more radiation than the 4G and 5G systems we use today.

And 5G begins to rollout even more, our radiation levels will drop even more.

Look at it this way. If there were one giant cell tower in the middle of the country for all the phone calls, then most of us would be toast.

Fewer towers would mean that they’d have to produce stronger signals to get the same job done.

So, does 5G emit radiation? Yes.

Does it emit harmful levels of radiation? Well, that’ll be completely in your control.

Rather than remain misinformed and fear the inevitable, wouldn’t you rather be in the know and profit from the emergence of 5G?

I know I would. Stay tuned for more developments regarding 5G investment opportunities, and if you haven't already, be sure to sign up for Wealth Daily to receive daily stock market insight and analysis.

After getting your report, you’ll begin receiving the Wealth Daily e-Letter, delivered to your inbox daily.
Buffett's Envy: 50% Annual Returns, Guaranteed
Warren Buffett once told investors at an annual shareholder meeting, "...it's a huge structural advantage not to have a lot of money. I think I could make you 50% a year on $1 million. No, I know I could. I guarantee that."