You might remember a few years ago (although it honestly seems like far longer) that there was a pretty big uproar about these things called rare-earth metals. 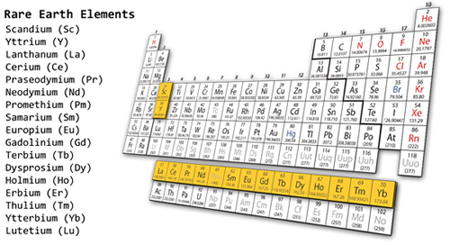 If you’re anything like me, when you first heard the term “rare-earth metal,” you figured they must be uncommon elements. That must be why they’re called rare, right? Wrong.

Rare earths are a group of 17 elements that are used for many different applications, including the manufacture of electronic components, high-powered magnets and batteries.

But the demand for rare earths will always be there. Why?

It has the biggest reserves in the world with an estimated 44 million metric tons of rare earths.

It was responsible for almost 60% of the total rare-earth market production in 2020, and that share has grown to 80% since then.

And in 2019, the country threatened to cut off supply to the U.S. That’s a big deal since we don’t have much of a rare-earth mining industry anymore.

But after 2019's threats from China, President Trump doubled down by making the entire supply chain for rare earths “essential to the national defense” under the Defense Production Act (DPA).

Then in May of 2020, Senator Ted Cruz proposed a rare-earths funding bill that would revive the U.S. rare-earths industry with tax breaks for mine developers and manufacturers who buy its products.

The bill gained approval in May 2021, and will let mining companies deduct the costs of building rare-earth mines, processing facilities, and equipment purchases from their tax bills.

And their customers will be able to deduct 200% of the cost of U.S. rare-earth products from theirs.

The amendment also authorizes $100 million for projects aimed at producing and reclaiming rare earth elements and other critical minerals, with the aim of ending the United States' dependence on China.

It went public in 2020 via a reverse merger with a special purpose acquisition company (SPAC) called Fortress Value Acquisition Corp. .

Shares of the company are listed under the ticker symbol MP and trade for less than $40.

Rare-Earth Stock #2: China’s Challenger — Next up on our list is an Australian company called Lynas Rare Earths (OTC: LYSCF). As you can see, it has shares that trade on the U.S. OTC markets, and it’s the largest producer of rare-earth elements outside of China.

Rare-Earth Stock #3: American Dreams — And finally, I’ve got a tiny American company for you. It’s very speculative because it’s not producing any rare earths yet, but it has the rights to mine what could be one of the most prolific deposits of rare earths in the country.

In the meantime, the partners are also building their first plant in Colorado to process the minerals they excavate at the mine. The companies started producing small amounts of processed materials towards the end of 2020.

Now, the partners can finalize supply deals with potential customers and secure the financing they’ll need for a full-scale plant near the Texas mine.

Senator Ted Cruz’s bill is just the first in a long line of government stimulus and spending likely to hit the industry in the coming years. It's become a major bipartisan effort on Capitol Hill.

And investors who position themselves early stand to benefit the most.

And that growth may go into hyperdrive as early as next year.