Special Report: Time Crystals: How Quantum Computing Could Break Physics (and How to Profit)

One of the most important — and philosophically heavy — laws of physics is the second law of thermodynamics.

It states that the entropy, or disorder, of a closed system — whether that’s a computer processor, a human body, or a universe — will gradually increase until the system reaches a thermal equilibrium of maximum chaos in which it can perform no work. Computers slow down and eventually stop working. Bodies age and eventually die. Universes expand and cool and eventually reach absolute zero.

This decay of systems into useless randomness is so universal — and so inevitable — that physicists sometimes call it the “arrow of time.” The increasing disorder of closed systems always clearly separates the past from the future. 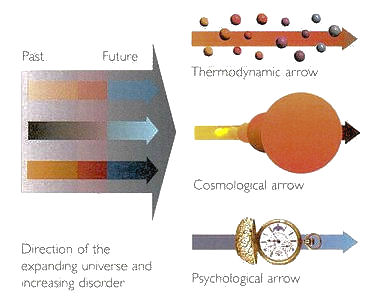 Well... it did, until July… when Google parent Alphabet (NASDAQ: GOOG) broke time and the laws of physics with a quantum supercomputer.

Alphabet Did What Now?

OK, to be clear, those crazy kids in Mountain View, California, didn’t quite build a working time machine. They created a small-scale, proof-of-concept virtual time machine called a “time crystal.”

Curt von Keyserlingk, a physics professor at the University of Birmingham, explains time crystals through a thought experiment involving a closed box of pennies that is shaken up. 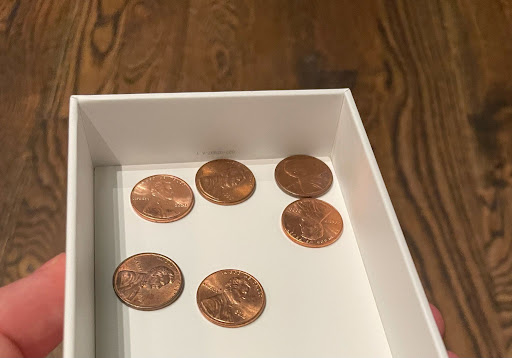 Orderly initial state of a box of pennies (photo by author)

As you know, pennies only have two physical orientations — heads or tails. And ordinarily, it makes no difference whether you place the pennies in the box all-heads, all-tails, or some mix of the two. Each time you shake the box, the entropy within it will increase until all of the pennies have random orientations, with a roughly 50/50 equilibrium of heads and tails.

No one will be able to deduce the initial orientation of the pennies based on their final orientation, because with the passage of time, the system has become too disordered to yield such usable information. The second law of thermodynamics — and therefore our understanding of time — is conserved. 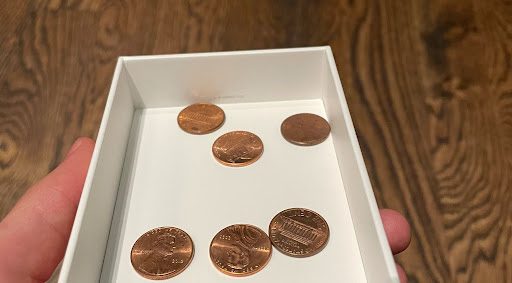 Thus, you could throw the box into a tumble dryer, look at the orientation of the pennies inside when it’s finished tumbling, and accurately calculate whether they were initially heads or tails based solely on how much time had passed. 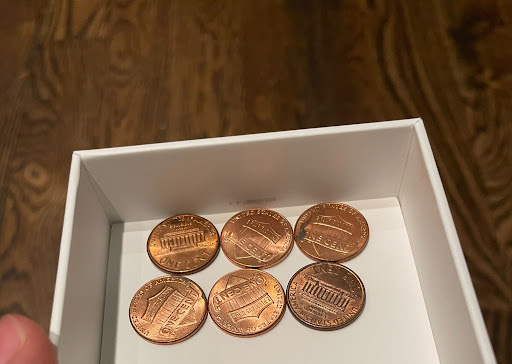 This box of pennies violates the second law of thermodynamics; its disorder does not increase over time. People who observe it can see “dead information” from the past that shouldn’t be visible to them anymore. It effectively does not experience the passage of time.

Alphabet created one of these things within a hyper-realistic simulation on its quantum supercomputer Sycamore. At first, that might sound unimpressive — computers can simulate all sorts of things, after all.

But even though Alphabet’s time crystal only exists in cyberspace, it is still a time crystal — and will still perform its anomalously regular oscillations no matter what researchers try to do to throw it off — including turning off the computer. Alphabet employees could unplug Sycamore, wait some period of time, plug it back in, boot up the time crystal program, and find that the crystal had completed exactly the expected oscillations like there had been no interruption.

If you’ve been thinking about the potential applications of such a breakthrough, your mind may have gone to timekeeping. Indeed, time crystals are the most accurate clocks known to man. Atomic clocks — the current gold standard in timekeeping — are still prone to minute inaccuracies due to quantum mechanical fluctuations, but time crystals are perfect.

They could thus have great value to the U.S. Space Force and other operators of satellite positioning systems, which rely on timekeeping, which must be accurate down to the nanosecond in order to judge the position, speed, and orientation of a user. 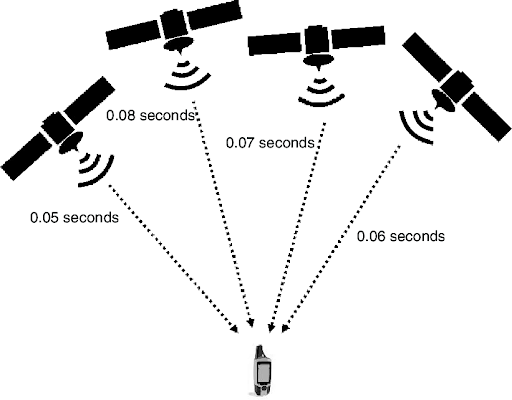 But the true significance of Alphabet’s recent breakthrough is much bigger than licensing some tech to the Pentagon. The bigger story is that quantum computers have become so powerful and sophisticated that they can perform simulations and calculations that can break the laws of mathematics, physics, and temporality.

If quantum computing can break physics, imagine what it can do to most encryption standards. It’s no wonder the Defense Advanced Research Projects Agency (DARPA) has been funnelling billions of dollars into quantum computing initiatives for classified reasons…

You’ve probably heard of a famous thought experiment by physicist Erwin Schrödinger that illustrates one of the wackier aspects of small-scale quantum mechanics.

In the Schrödinger’s cat experiment (which, thankfully to pet lovers, was never actually performed), Schrödinger proposed that a cat be placed inside a closed box along with a flask of poison, a pellet of radioactive material with an exactly 50% chance of emitting a radiation particle, and a spring-loaded radiation detector mechanism that would shatter the poison flask and kill the cat if it detected such a radiation particle. 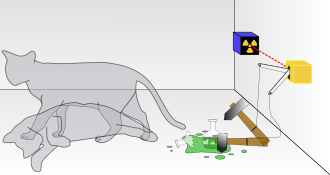 Schrödinger noted that under most interpretations of quantum mechanics, the cat, after being left in the box for some time, would be simultaneously alive and dead, at least until an observer opened the box to check which one was the case.

That’s because under certain circumstances (specifically, in a pristine environment with no human observation), subatomic particles of the type emitted by radiation sources can be superpositioned — they can exist in two places at once. That radioactive particle can, under the right circumstances, simultaneously be part of the atom but also be on its way to the radiation detector to kill the cat.

Schrödinger noted that the sheer act of attempting to observe superpositioning almost always ruins it by disrupting the delicate conditions required for it and thus “collapsing the probability function.” Even under the most fantastical interpretations of quantum physics, Schrödinger’s hypothetical box would, once opened, contain either a dead cat or a living cat.

But there’s one important kind of “box” that human beings almost never open — one that contains electrical activity on a small enough scale for quantum superposition effects to be significant: our computer processors.

Conventional computers store information and perform calculations in base-two, or binary, code — just zeros and ones (or, more precisely, circuits that are powered off or on). Quantum computers, however, take advantage of electron superpositioning effects to store information in base-three code — zeros, ones and twos, or circuits that are powered off, on, and off-on superpositioned.

Adding one extra number to a computer’s vocabulary might not sound like a big deal, but it could increase the speed of many operations — including hacking operations — by several orders of magnitude.

The Power of Quantum Computing

Most of the world’s sensitive data — from medical records to bank balances to classified military documents — are protected by Rivest-Shamir-Adleman (RSA) encryption.

This system makes data unreadable to interlopers by scrambling it into extremely complex math problems. The intended reader of the data can quickly unscramble it using “keys” — solutions to said math problems. 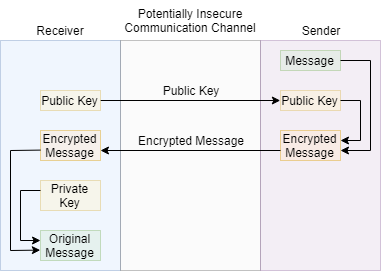 Hypothetically, a bad actor who doesn’t have the keys to a piece of RSA-encrypted data could unscramble it through trial and error — but the RSA algorithm is designed such that this would take a completely unfeasible amount of time on any classical computer. It is estimated that even a relatively advanced binary supercomputer would take 300 trillion years to break RSA.

But a mature quantum computer could do it in less than a day.

We can only speculate, but this is likely the reason why DARPA is funnelling money into quantum computing research initiatives like gangbusters. It’s also likely the reason why the Chinese government has invested more than $10 billion in its National Laboratory for Quantum Information Sciences over the last decade.

This, however, doesn’t represent the only way to invest in quantum computing technology.

Indeed, large, diversified tech companies in the U.S. and China have been responsible for most of the exciting breakthroughs in quantum computing over the last few years.

The four Big Tech firms we’ll discuss below aren’t quantum pure plays, but they do have the strongest quantum computing capabilities currently known to man.

Founded in 1998 (as Google) and based in Mountain View, California, Alphabet is the world’s fourth-largest technology company by revenue. Outside of its flagship search engine business, it is one of the most prominent AI and cloud computing companies in the world.

Alphabet’s time crystal discovery is not even its first quantum computing accomplishment. Back in 2019, the firm made history when its quantum computer, Sycamore, achieved “quantum supremacy” — completing a calculation in 200 seconds, whereas a classical supercomputer would have taken an unfeasible amount of time (10,000 years, to be exact) to complete the same calculation.

In the most recent quarter, Alphabet earnings surged 166.2% year over year on a 61.6% increase in revenue.

Shares have traded up substantially this year, but they should only go higher from here.

Founded in 1994 and based in Seattle, Amazon is the U.S.’ largest e-commerce company. Its cloud computing subsidiary, Amazon Web Services (AWS), also controls a plurality of the U.S. cloud computing market (32% as of April 2021).

In its most recent quarter, Amazon grew earnings per share by 48.4% on a 27.2% increase in revenue.

Shares have had a bumpy ride this year, as the firm has faced some short-term regulatory hurdles — but Amazon’s future in quantum computing looks bright, and the current volatility could be seen as a series of buying opportunities.

The company has been working to develop its own quantum processor since 2018 and launched its own internal semiconductor fabrication to aid in this effort.

Alibaba has hit some rough quarters recently. Its earnings per share shrank 5.2% in the most recent quarter despite a 33.8% increase in revenue. Shares have traded downward this year amid Chinese regulatory crackdowns on tech companies — but China’s quantum computing ambitions aren’t going anywhere.

With that in mind, the recent sell-off in Alibaba shares could be seen as a great buying opportunity.

Founded in 2000 and based in Beijing, Baidu is China’s largest search engine and one of the largest AI companies in the world.

Last year it launched the Quantum Leaf development platform and the Paddle Quantum development tool kit, putting it ahead of most American tech firms in delivering managed quantum computing services over the cloud.

In the most recent quarter, Baidu grew its revenue by a respectable 20.4%. The firm also has a comfortably low debt-to-equity ratio of just 37.27%, a relative rarity among tech firms of its size.

Shares have sold off significantly since being pumped in the meme stock craze of early 2021, giving investors a great entry point.

Quantum computing is a technology with the potential to reshape our relationship with the internet forever, but it’s hardly the only transformative tech breakthrough on the horizon today — and it’s debatably not even the biggest.

If you’re looking for a reliable investment newsletter that can help you stay ahead of the latest trends in computing, science, and technology, check out Technology and Opportunity.