Not many investors thought oil prices could fall from $65 a barrel to below zero. After all, oil is the one commodity that the world simply can't do without.

And really, oil prices probably wouldn’t have collapsed if Saudi Arabia and Russia hadn’t engineered a massive production boost that flooded the world with oil. Yes, this bear market for oil was deliberate…

It is clear that these two nations attempted a power play. They wanted to take advantage of the economic disruption caused by COVID-19, drive U.S. shale oil companies out of business, and re-establish their dominance in the market.

On those three counts, they succeeded. They've put dozens of U.S. oil companies in hot water. And even non-OPEC oil producers were basically begging them to lead a production freeze to support higher prices.

So, it would seem the Saudis got what they wanted. But the irony is that while they won the battle, they may have lost the war.

Saudi Arabia has always been the world’s “swing producer.” For decades, Saudi Arabia was the only country that could instantly raise or lower oil production by a million barrels a day

So when prices got too high or too low, the world depended on the Saudis to make the necessary adjustment to keep things in balance.

The rise of oil production in Russia and the U.S. meant that Saudi Arabia lost some of its influence over the oil market. And back in 2014, they fought back the only way they knew how: by crushing prices.

But in a perfect example of unintended consequences, that Saudi-driven oil bear market made U.S. shale producers lean and mean. Over the last two years, they’ve cut costs and gotten more efficient.

So today, the cost to produce a barrel of American oil has basically been cut in half.

Today's near-zero priced oil blows a massive hole in the Saudi budget. They’ve had to sell bonds, liquidate their foreign cash reserves and cut benefits and subsidies. They even floated part of the Saudi national oil company, ARAMCO, to raise some extra cash.

But most U.S. oil companies are now profitable with oil at relatively low levels like $40. So the minute Saudi Arabia, OPEC, and Russia agreed to production cuts to get prices at least over $50, U.S. companies started spending more money to bring oil to market.

By the end of 2020, U.S. production could top 12 million barrels a day. And that’s why oil prices have been stuck so low — Saudi Arabia has lost its ability to ramp oil prices at will.

Oil investors must acknowledge that the global oil market has changed. And it’s because of U.S. shale and other unconventional oil reserves. In the last 10 years, U.S. production capacity has practically doubled, jumping from around 5 million barrels a day to 9.5 million barrels a day at its peak in January 2015. 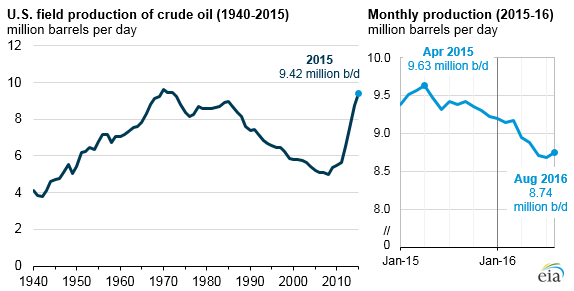 The ability of U.S. oil companies to ramp up production will take up much of the slack created by OPEC production cuts. It is therefore unlikely that oil prices are going back to $100 anytime soon. Unless of course, Saudi Arabia wants to cut its production even more…

But in the long term (i.e. two-plus years down the road), there is a very good case to be made that oil prices can head significantly higher. Because the fact remains that oil is a depleting resource. Large discoveries are now very rare. And the large discoveries that are made — like those massive deepwater fields off the coast of Brazil — are simply too expensive to drill even with oil around $100.

Plus, investment was non-existent for the last five-plus years. Oil companies were simply trying to survive the price crash. As much as 5 million barrels of new discoveries have to come online every year in order to offset normal production declines from mature oil fields.

So that two-year gap in investment has basically ensured that there will be higher prices in the future. And select oil U.S. companies will easily double in price when oil prices start to spike higher.

How to Play It

Right now, the Permian Basin in Texas has the cheapest-to-produce oil in the U.S. costs are below $20, a barrel in some cases.

Second, you want oil companies with a manageable amount of debt. Nearly all oil companies had to take on debt during the oil bear market.

It’s probably obvious, but oil companies with lower relative debt will be better able to survive and prosper going forward.

Now without further ado, here are our favorite oil stocks…

Matador Resources is primarily an Eagle Ford/Permian Basin oil play. These are two of the most prolific U.S. oil plays.

Matador will have no problem servicing its debt until oil prices turn around. The stock currently trades around $4 a share.

Callon Petroleum is a pure-play on Texas' Permian Basin. It has 540 million barrels of proved oil and oil equivalent reserves.

Callon has long-term debt of $3.18 billion and shareholders equity of $3.22 billion. It currently trades around $0.50 a share.

Laredo has a market cap of $117 million. It also has $1.17 billion in debt. Laredo has some of the best acreages in the Permian Basin. It also has massive proved oil reserves of 293 million barrels.