May you live in interesting times.

Chinese-speakers are quick to point out that there’s no equivalent saying in their language and that this “curse” is probably of 19th century British origin — nonetheless, its meaning rings true. Happy times in history, like periods of peace and prosperity, tend to be boring and uneventful. The interesting stuff happens in periods of conflict and economic volatility.

It’s safe to say that we are living in interesting times today. Stock indexes are swinging up and down by a thousand points in a single trading session. 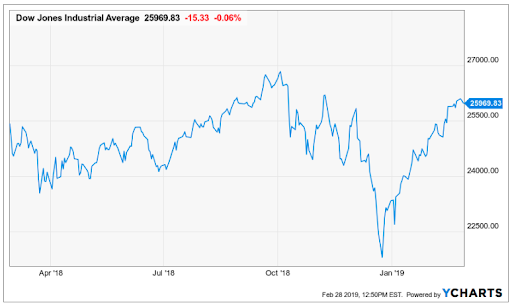 Large portions of the Middle East have been continuously engulfed in armed conflict for almost two decades. And Russia and China are rapidly building their military capacities and space capabilities, challenging U.S. dominance.

What if you could own a set of stocks that don’t waver in the face of such tensions and uncertainties? What if these stocks actually benefited from the “interesting times” we’re living in?

I’m talking, of course, about aerospace and defense stocks. These blue chip companies offer their shareholders capital gains, dividends, and protection during periods of instability. After all, their biggest customer — the U.S. government — has a virtually unlimited amount of money to spend on them.

With geopolitical tensions rising around the world and a new space race beginning, now is the perfect time to buy these trustworthy stocks. Let’s get to know five of the best companies in the defense and aerospace pack…

The United Launch Alliance (ULA) is a joint venture of Boeing (NYSE: BA) and Lockheed Martin (NYSE: LMT) combining the space teams of the two companies.

Long before SpaceX even existed, ULA was known for many years as the “rocket monopoly.” It developed the Delta IV and Atlas V disposable rockets, the longtime workhorses of the satellite industry.

The alliance was also the sole provider of launch services to the U.S. government from the early 2000s until the recent emergence of SpaceX.

And ULA still seems to have a certain sway over the folks in Washington. Last October, it received $967 million from the Defense Department to finish development of the reusable Vulcan rocket, which is expected to see its first launch in the early 2020s.

Unfortunately, ULA itself is private — you can’t invest directly in the joint venture. But you can invest in its two constituent companies, Boeing and Lockheed Martin. And they’re both pretty incredible investments.

Seattle-based Boeing is a dividend-paying Dow component, but its growth numbers are a lot more exciting than those of most companies of its size. The stock is up by 7.31% so far this year.

Its dividend currently works out to a respectable 2.31% yield. That dividend has been rising continuously for eight years and is unlikely to be cut anytime soon.

Boeing is very heavily invested in space technology, even when ignoring its participation in ULA. The firm has made headlines recently with big investments in space startups — including Accion (a developer of small, scalable electric thrusters) and Millennium Space Systems (a satellite builder).

These investments should ensure that Boeing remains a competitive space stock in its own right.

Lockheed Martin is less than half the size of Boeing — but by some measures, its financials are even more attractive.

In the last 12 months, the firm has grown quarterly EPS by a respectable 10.12%. Its strong earnings have given it a very strong return on equity (ROE), an earnings and equity-based measure of management effectiveness which Warren Buffett has called the single most important financial metric. Lockheed’s ROE is a mind-blowing 259.2%.

Lockheed is also a dividend payer, with a yield of 2.34% at the time of this report. That dividend hasn’t been cut since the early 2000s, and it accounts for a comfortably low 41.82% of EPS.

Like Boeing, Lockheed has also invested heavily in space startups. These include Terran Orbital (a developer of tiny, lightweight satellites that do as much as their car-sized counterparts) and Orbex (a UK space startup that plans to build a spaceport in Scotland).

Virginia-based Northrop Grumman (NYSE: NOC) is a bit more than half the size of Lockheed and less than a quarter of the size of Boeing. Yet, back in October, it received the largest Defense Department award of any single space company.

Northrop Grumman received $791.6 million to create a new partially reusable rocket system called OmegA. And unlike Boeing or Lockheed, it gets to keep all that money (rather than splitting it with a joint venture partner).

In the last year, the firm has posted solid quarterly revenue growth of 4.82%. It pays a 1.43% dividend, which accounts for just 28.64% of EPS. And after almost 15 years of uninterrupted dividend growth, it’s well on its way to becoming the next Dividend Aristocrat.

Perhaps most excitingly, the firm is very cheap on an earnings basis — it trades for just 20 times EPS at the time of this report.

Like the other two companies we’ve profiled, Northrop Grumman has kept its space pipeline fresh through investments and acquisitions. Last June, it completed the acquisition of Orbital ADK (now Northrop Grumman Innovation Systems), a builder of small and medium-sized rockets for government customers.

Massachusetts-based Raytheon Company is a more specialized contractor. It primarily develops weapons systems in the more experimental fields of the defense industry.

And this specialization has paid off in droves. Raytheon has grown its EPS by 36.89% in the last year. It pays a 1.74% dividend, which accounts for just a third of its net income. And that dividend has been growing for 13 years straight.

The firm is one of the most prolific manufacturers of laser weapons in the world. Its "strike laser," a weapon that's compact enough to mount on aircraft, has already been tested from an airborne Apache gunship against a target 1.4 kilometers away. And its ground-based microwave lasers have already proven capable of engaging many drone-sized targets at the same time.

But the company’s interests go far beyond lasers. Raytheon is one of the leading firms working on space-based missile defense solutions to the ongoing ballistic missile threats posed by some of our best-armed rivals.

As such, Raytheon's development of advanced tracking and kill-systems to defeat extra-atmospheric threats, such as intercontinental ballistic missile (ICBM)-borne reentry vehicles, is considered one of the most important initiatives at the Department of Defense (DOD) today.

Raytheon also operates on the other end of the missile dynamic. In 2017, the company captured a $900 million deal for the development of a new nuclear-capable cruise missile.

Farmington, Connecticut-based United Technologies (NYSE: UTX) really does it all. It’s a Dow component, a Dividend Aristocrat, a civilian engineering firm, a major defense contractor, and a space stock rolled into one.

The firm has impressive 18.09% revenue growth year-over-year. It also has an extremely safe 2.05% dividend, which eats up less than 48% of EPS.

But the firm also has a massive space and defense wing — Collins Aerospace — which it formed in 2012 when it bought Rockwell Collins.

Collins Aerospace alone brings in more than $8 billion a year in revenue, much of which comes from space-related government contracts. The subsidiary is currently working with NASA to develop a supersonic plane and a trash compactor for spacecraft, among other projects.

President Trump has boosted projected defense spending by more than $200 billion for fiscal years 2017 through 2019.

Any way you look at it, one thing is clear: The money that this administration has committed to new space and defense spending will keep these major arms makers on a path of growth for decades to come. And that'll be true no matter which way global politics takes us.