Special Report: The Private Market: Where the Action Is Now

The news is awash with headlines about high-flying (and high-priced) public companies like Apple, Netflix, and Facebook. It seems you can’t go a day without hearing how their stocks are performing.

But what gets left out is any talk about all the investing and trading that went on before these companies went public. And in recent years, this “private side” of the market has been taking home the lion’s share of the profits… well before public investors even get the chance.

​But that shouldn’t really surprise you all that much. Every once in a while, you hear how much the insiders will make or did make when a big company has its IPO. The numbers are mind-boggling. But in case you haven’t seen any of those stories, let’s examine a few and see where the real profits come from…

First, let’s take a look at eBay. Investors who bought eBay stock at its IPO were rewarded with an 872% gain within the first 12 months. That’s a really good investment right there — it would have turned every $1,000 invested into nearly $10,000 in just 365 days.

But the people who were able to invest in eBay before it went public were the ones who really took home the prize. Their gains were so big they honestly make that 872% look like a loss.

That’s because the private investors in eBay cashed out with a 105,000% gain! That would have turned every $1,000 you invested into over a million.

But in case that’s not enough to convince you private investors take all the profits, let me give you another example with LinkedIn, the social networking site for businesses...

If you’d invested $10,000 in LinkedIn when it IPO’d, you’d have watched as your shares ran up 336% before the company was bought by Microsoft. That would have turned every $10,000 invested into $43,555. And again, that’s a pretty stellar return on your investment.

LinkedIn’s private investors cashed out a truly whopping 261,900% gain when the company went public. That meant the same $10,000 investment was worth well over $26 million.

Even a $1,000 private investment would have let you walk away with more than $2.6 million. 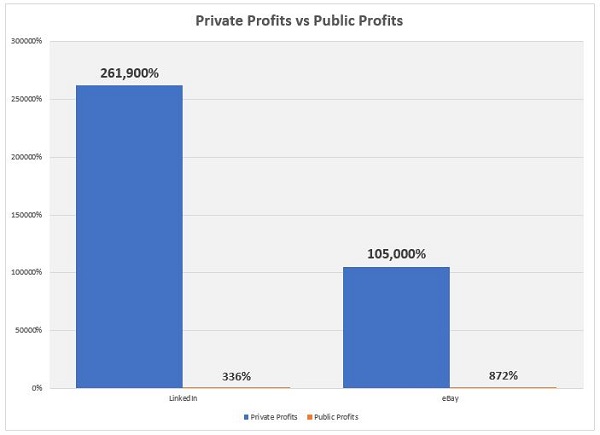 I mean, that chart really says it all. A 336% gain for LinkedIn and an 872% gain from eBay barely even show up as colored lines compared with the profits you could have earned in the pre-IPO market.

Still not impressed? OK, I’ll do you one (much) better.

As you may already know, Amazon has been one of the most successful publicly traded investments in history. The stock’s IPO was valued at just $18, and it’s sitting well above $3,000 a share now.

That’s a great gain. It’s one any analyst or investor should be incredibly proud of — it’s a success. But it’s not even close to the kind of success Amazon’s early investors had. You might not even believe me because their gains were truly astronomical: 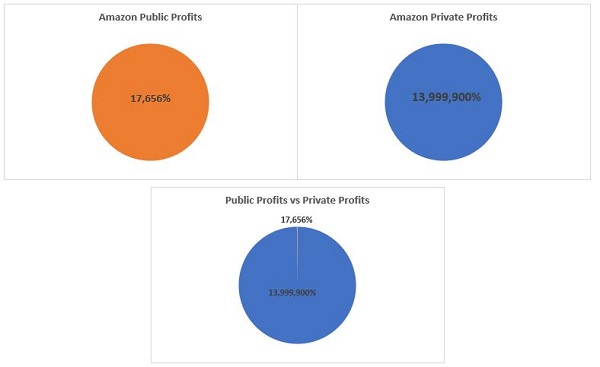 Anyone who invested $10,000 in Amazon before it went public is now a billionaire, with his investment worth a whopping $1.4 BILLION — that’s right, BILLION.

But until only a few years ago, you would have been fully justified — unless you were both very rich and very well-connected — in saying, “Why should I care?”

That’s because most of these private, pre-IPO deals were off-limits to all but accredited investors — who must earn at least $200,000 a year and have a liquid net worth of at least $1 million — or those lucky enough to be employed by these firms before they went public who were given stock options as a (very) nice perk.

But thankfully, we now have three “loopholes” to give the rest of us mere mortals access to the private market: business development companies (BDCs) and special-purpose acquisition companies (SPACs), both of which have been around for some time, and direct investment in private equity, which became an option only very recently.

They help small companies through their initial growth stages and help distressed companies turn around their financial situations.

And they’re required by law to pass on at least 90% of those returns to their investors, not unlike real estate investment trusts (REITs).

As a result, BDCs can provide investors with almost unmatched income-generating capabilities, even during times of low interest rates. The average BDC currently yields around 10%.

And they can get investors in on the ground floor of some exciting opportunities. Hercules Capital (NYSE: HTGC), for example, one of the largest BDCs, once funded Pinterest, Postmates, and DocuSign.

It’s hard to overstate how valuable BDCs can be for investors — under the right circumstances. First off is the income they offer. 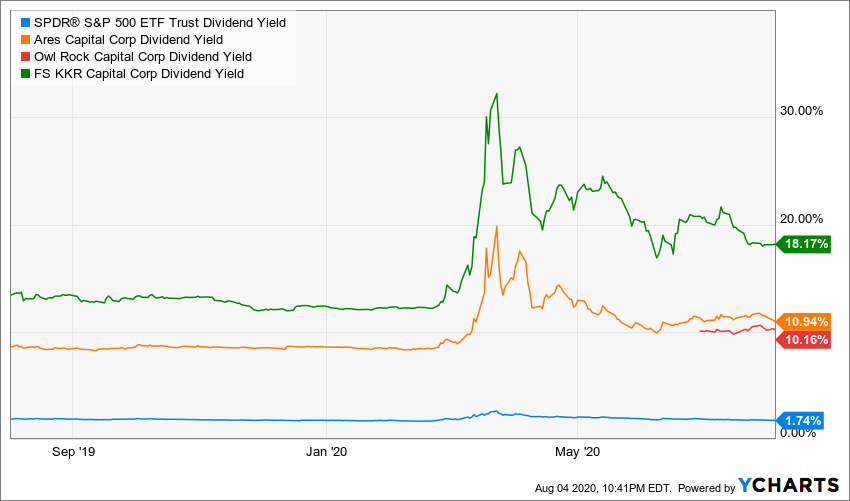 Then there’s the added benefit that BDCs also offer investors the chance to diversify their holdings with private equity but are far more liquid than such assets usually are.

Plus, they’re known to outperform the markets in tough times. By investing heavily in tech startups in the years after the Great Recession, publicly traded Ares Capital set itself up to trounce the S&P 500 over the following decade, yielding more than twice the return of the S&P 500: 424.4% versus 192.2%. 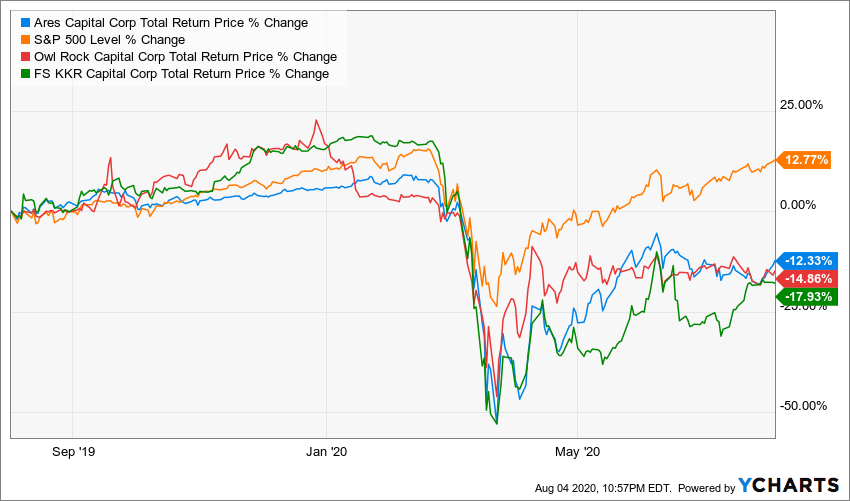 In sum, BDCs offer almost unbeatable yields during low-interest periods like the current one and let ordinary investors like you buy stakes in private, up-and-coming businesses.

Special-purpose acquisition companies (SPACs), also known as “shell corporations,” don’t have any actual operations themselves. Instead, they’re created for the specific role of acquiring “real” firms and taking them public, hence the name.

SPACs are generally formed by activist investors and executives who have experience in a particular industry and have a few acquisition targets in mind. But in order to avoid certain regulatory requirements, they go public without a specific acquisition plan in place.

When a SPAC goes public, it typically sells shares for $10 each and then puts that money into a trust where it accrues interest while the SPAC’s management tries to find an acquisition target.

If the SPAC doesn’t acquire a company within a limited time frame (usually two years), the trust is liquidated and returned to investors. Those who buy shares of the SPAC at a discount to its trust value per share can earn a small but safe return this way.

But if the SPAC does acquire a company, the SPAC shares are converted into shares of that newly public company, giving investors a shot at far greater returns.

DraftKings, for instance, trades at more than $36 at the moment. Some of its premerger SPAC investors saw returns of more than 260% in just 2.5 years.

If you’re wondering what the catch is, the main one is uncertainty. Investors don’t know which private company is going to be acquired, which is why you will see shares trading flat for months and then a spike at the time the merger is announced.

In sum, SPACs and BDCs can get you into the private market and sometimes get you significant returns — but they can also be quite risky.

But there is one other option that recently became available to retail investors that gives you much more control over where your money goes. And that’s direct investments in private companies.

Thanks to recent landmark congressional legislation that eases some of the strictest requirements on investing in the private market, now everyone can get in on private companies before they IPO and before the massive profits are already taken...

Your new subscription to Wealth Daily will give you the ability to access truly private investments and the potential to become one of a small, exclusive group that ends up with nearly all the gains from late-stage IPOs.

That’s because through Wealth Daily, you’ll have the opportunity to join other savvy groups of investors already taking advantage of the private markets, like the community of our brand-new private investing service Main Street Ventures...

Main Street Ventures is a first-of-its-kind investment advisory newsletter where our private investing experts help guide readers through the often murky (but incredibly profitable) waters of the private market.

It not only gives you access to these lucrative private deals that were off-limits to all but the super-rich, but it also helps you avoid the traps and scams that always come with a new investment landscape.

You might even call Wealth Daily and Main Street Ventures “the equalizers” when it comes to boosting your chances of beating the billionaire-elite at their own game.

Click here to learn more about Main Street Ventures, including how we vet our investments to make sure you only get the best opportunities for the biggest profits and how you can get started investing in the private markets TODAY.

And welcome to the Wealth Daily family! We’re happy to have you as a part of our growing community.