Special Report: The Only Airline Stock You Should Buy

You don’t have to be a financial analyst, Wall Street economist, or financial news anchor to know that the airlines took the global coronavirus shutdown squarely on the chin.

United Airlines (UAL) fell from around $90 and hit as low as $17 before it started to come back. It’s still down over 70% from its highs. Delta, Southwest, JetBlue, and American Airlines all followed the same trajectory throughout March. 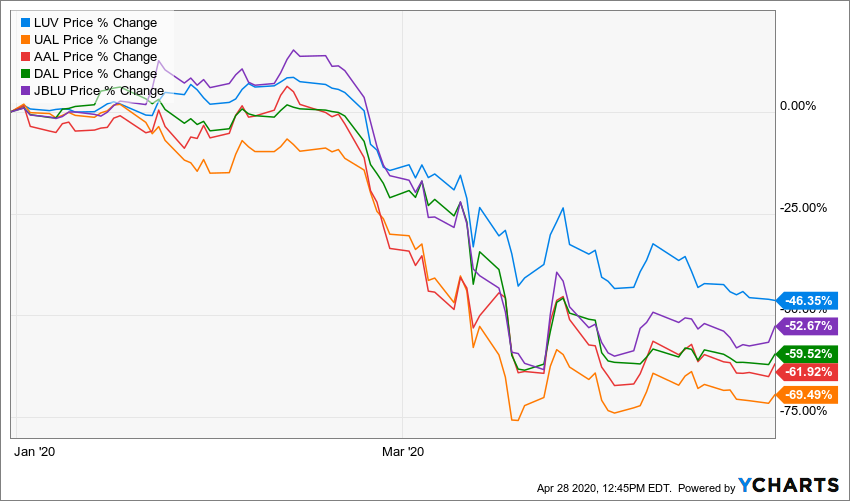 With fears of bankruptcy wiped away nearly as fast as they’d surfaced, the airlines enjoyed about a week or two of strength before earnings came out and the world realized how big of a crisis we’re really in.

Since then, the airlines have bounced around, but haven’t been able to pick up that momentum again.

But the thing is, we’re not going to stop traveling. And airplanes are still going to be the fastest way to cover a long distance.

You may hear a lot of people talking about the new “Zoom economy” where business is all handled via video chats and business travel is no longer necessary. But don’t listen to them. They’re idiots.

I guarantee you that any company that tried to go 100% digital will lose out to its competitors who still conduct face-to-face meetings with clients and customers.

And you may be hearing that people aren’t likely to travel as much now that we know you can bring diseases home with you. But that’s a bunch of hogwash as well…

We’ve always been susceptible to disease while traveling and it’s never stopped us before. And if you need some history to act as a guide, just look back to the last pandemic to shake the world – the Spanish Influenza.

Leisure and travel companies enjoyed a boom never before seen after Spanish Flu ran its course. People who’d been trapped in their hometowns rushed to get out and shake off the cabin fever. And it wasn’t until the Great Depression hit that those trends slowed.

To misquote Warren Buffett, the time to be greedy is when everyone else is scared.

The Only Airline You Should Buy

And the airline industry is right where the fear is focused these days. So it makes sense to start to be a little greedy.

But, you can’t forget that we’ve got some rough times still to come. When we start flying again, at least initially, they’ll try to keep social distancing a thing by removing the center seat.

That sounds great, until you realize that domestic flights have to be AT LEAST 70% full for the airline to cover its costs. And if you take out one third of the seats, you can only fill the plane to 66% capacity – even if you sell every remaining seat.

So, that means airlines are going to be losing money on every single domestic flight until they can start packing us in like sardines again.

And that means the first place you need to look is the balance sheet. Share price doesn’t matter at all if the company can’t manage to make it through what’s ahead. And revenues are all going to be terrible for a while.

And the balance sheets of most airlines are in terrible shape. They took advantage of low interest rates to load up on debt. They spent money that could have gone to pay off that debt on share buybacks instead. And they were already a very low-margin industry with slim profits to begin with.

But there’s one that flies above the rest thanks to its decision to keep debt relatively low and its cash balance relatively high.

It may surprise you that the one carrier with the highest reliance on domestic flights is my top airline stock. But once I’ve explained why, I think you’ll agree.

Southwest isn’t just a discount carrier anymore. It is the largest budget airline in the world, but it’s become a lot more than just a cheap way to fly.

Southwest is the only airline in the country to have never laid off one worker in its history. It’s got the highest marks from passengers. And it’s management team grew it from a tiny airline serving two routes between regional airports in Texas to an international powerhouse with 88 domestic destinations and 15 international ones in 12 different countries.

But it hasn’t expanded too fast. It’s kept the focus on the U.S., the Caribbean, and Latin America. So it’s not wasting billions holding spots open at European and Asian airports like it’s bigger cousins Delta, United, and American.

Moving past the balance sheet, we can see that Southwest has maintained higher profit margins than its larger peers. Southwest’s profit margin is 10.25%. Delta clocks in at 7.76% and United only keeps 6.96% of its revenues as profit.

Profitability is going to be paramount coming out of a recession. That’s when momentum stocks give way to value stocks with solid balance sheets and small cap stocks with actual profits.

Then we move on to dividends. Southwest and Delta have both paid dividends in the past. United does not pay investors a distribution. Income is going to be very much sought-after in a recessionary environment.

And with a super-low payout ratio of 16.39% of profits, Southwest may be one of the only airlines that doesn’t have to cut or suspend its payments. Delta announced in March that it would not be paying any distributions for the foreseeable future.

With U.S. states already opening up their economies again, we seem to be out of the woods as far as domestic travel restrictions. Southwest has taken this crisis on the chin, but it’s getting backstopped by the government so it won’t fail. And it’s got a history of treating customers, employees, and investors very well.

It’s the best of the bunch when it comes to U.S. airlines and the lack of international exposure that may have held shares down before is now a benefit that will help drive them up faster than the other companies in the industry.

If you invest now, in ten years, people might just be calling you instead of Warren Buffett for investment advice.