If you’ve left the house anytime in the past few months, you’ve probably already seen a display of hemp sitting on your pharmacy’s shelves. You may not have noticed it because there were no green bales lying around, but it was undoubtedly there.

Late in 2018, the U.S. government removed hemp, a non-psychoactive part of the cannabis family, from its banned substances list. It opened up a whole new industry that’s projected to grow even faster and get even bigger than legal marijuana.

Industrial hemp harvested in the U.S.

Cannabidiol, one of the many chemicals found in cannabis sativa plants, had already been gaining popularity for its potential health benefits. But with the family of plants that produce it still considered illegal, its use wasn’t that widespread.

Now that hemp is 100% legal in the United States, however, the industry has taken off. And you can find hemp-based CBD products on the shelves of your local Walgreens or CVS. For a brief time, you could even order some at Carl’s Jr. 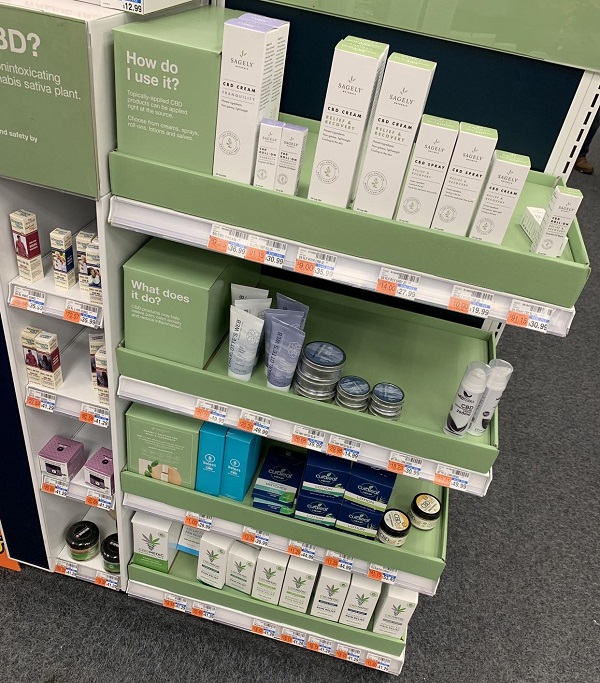 But is it just a fad or here to stay? And is it worth investing your time and money?

I say it’s here for good and only getting bigger. A lot of people agree with me. And it may be the best investment you’ve ever made.

I’ll get to the investing side in a bit. First, I want to really drive home how big this industry is going to be and why that’s pretty much guaranteed.

How I Know it’s Not a Fad

CBD has real benefits. According to HealthLine.com, it has been shown to be effective in treating a myriad of disorders and diseases.

The number one reason people use it is as a natural way to help control emotional disorders like depression and anxiety. But that’s just the start. It’s also linked to antipsychotic properties that help treat extreme illnesses like schizophrenia.

CBD has already been shown to help people control the tremors associated with Parkinson’s disease, the pain associated with multiple sclerosis, and the seizures that come with epilepsy. In fact, one company already has an FDA-approved epilepsy with CBD as its base ingredient.

It’s been shown to help remedy the scourge of adolescent (and sometimes adulthood) acne. And it’s helped diabetics continue to lead normal lives.

It’s been shown to help ease the symptoms that come with some forms of cancer. And it helps patients endure the pain, nausea, and other side effects of traditional cancer treatments.

Some evidence also shows that it can help lower your blood pressure and fight against heart disease. It may even help your body naturally fight off tumors.

There are real benefits. And with every person who tries CBD, we’re seeing more and more converts.

According to a study performed by Brightfield Group and HelloMD, 80% of people who tried hemp-derived CBD products found them to be extremely effective. 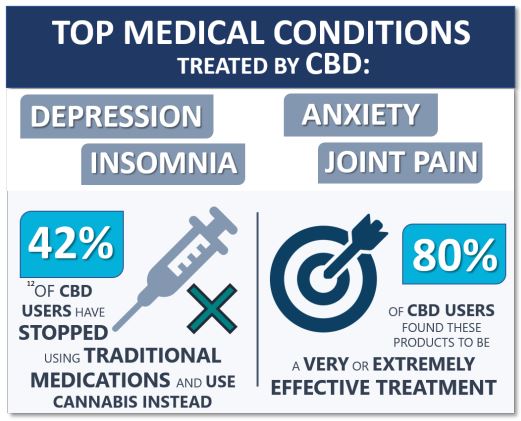 66% found them more effective than over-the-counter products they had been using.

And an amazing 56% indicated the CBD was more effective than their prescription medications.

42% of CBD users stopped using traditional OTC and prescription medicine entirely. And 37% now use a combination of traditional medicine and CBD.

80% of them use CBD treatments at least once per week. 41% use them daily.

There’s already a massive market that has developed around what’s being called a medical miracle, but there’s a ton more growth still to come.

The King of Cash Crops

One thing that’s always made me laugh about the cannabis industry is when I hear people who used to grow it when it was illegal to talk about the industry.

They always called themselves farmers. They were growing a drug and making drug-dealer money, but they liked the way “farmers” sounded, so they stuck with it.

Now cannabis is a commodity, and they really are farmers. But now that there are taxes and regulations in place, they’re actually making farmer money. And they’re not happy since they thought farmers got paid the same as drug dealers for so many years.

In case, if there are any of you out there who are confused about the financial fortunes of America’s farmers, let me give you a little color on the matter.

Soybeans, America’s other dominant farm crop, produce, on average, 55.5 bushels per acre. And they sell for about $9.20 per bushel. So, using simple math, farmers stand to sell an acre’s worth of soybeans for between $400 and $600.

Also, according to the USDA, there were approximately 91.7 million acres of corn planted this year in the U.S. That means if all the corn in the country is sold, farmers will see revenues between $45.85 billion and $64.19 billion.

When it comes to soybeans, there are fewer acres. The USDA estimates 80 million acres planted this year in the U.S. And if all those are sold at current market prices, farmers are going to be looking at $32 billion to $48 billion in sales.

Now, none of those numbers take into account the cost to produce all that corn and soy. Once you factor those in, some farmers don’t even make a profit at the end of the year. As many farmers have sadly said, every time they put corn and soybeans in the ground, they're taking a major financial risk.

But that could all change thanks to hemp. And real farmers have a shot at pulling in the kind of drug-dealer money those pretend farmers used to make before marijuana legalization started sweeping the nation.

If all the hemp that was licensed in 2019 gets sold, those farmers stand to make a pretty penny. At the low end of estimates, those half-million acres could score farmers $3.07 billion in sales. And at the high end, they could be raking in over $20 billion from it.

Think about that: If about 500,000 acres of hemp are sold at the high-price estimate, it could add up to half of the proceeds from all 80 million acres’ worth of soybeans.

What do Idaho, South Dakota, Mississippi, and New Hampshire have in common? They’re the only four states in the entire country without a legal hemp industry

Since 1996, when CA first approved cannabis for medical uses, legalization has made it to 33 states plus D.C. 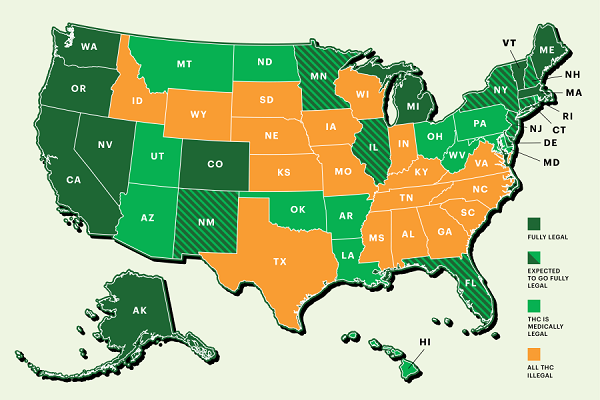 That took 25 years — a quarter of a century. California’s cannabis legislation is old enough to rent a car, but cannabis legalization is still in its infancy.

But in just the few months since 2018, legal hemp cultivation went from only six states to 46 states. 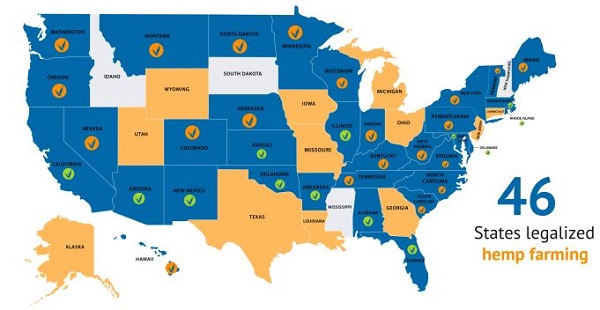 The cannabis industry grew fast by most standards and will continue to do so. But the hemp industry is going to set entirely new standards for massive and rapid growth, and we’ve already got proof. 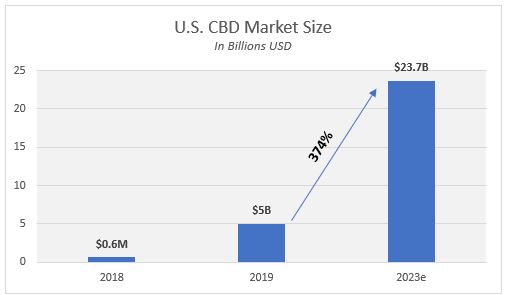 Just imagine — that’s $18.7 billion more to come in just the next three years.

And that’s not even the most impressive set of numbers I’m going to show you today.

Only 19 countries plus, part of the U.S. — that’s a lot more than when I was a kid, but it’s still not that many. And non-prescription use is still illegal in most of the world despite Canada’s groundbreaking move in 2018. 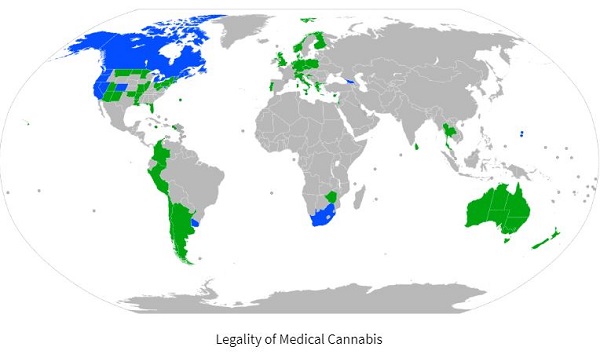 But CBD is legal without prescription in almost 50 countries worldwide.

That’s 48 countries already on board, with more nearly guaranteed to join in as the phenomenon sweeps the globe.

According to a report by Market Research Future, global CBD sales totaled around $3.09 billion in 2018. By 2026, they’re expected to balloon to over $2 TRILLION.

That’s 125.6% compound annual growth, or total growth of 71,421%. And in case you weren’t sure, that’s a lot of money. $2.21 trillion is more than the GDP of Italy, Canada, South Korea, and Brazil, plus many more. In fact, there are only seven countries in the entire world with a GDP higher than $2.21 trillion.

I tried to make a chart of this to show you the incredible difference. But when compared to $2.21 TRILLION, $3.09 billion doesn’t even show up as a thick line.

2019 may have been the best year of growth the U.S. CBD industry will ever see, as it shot from $600 million to $5 billion. But there’s another $17 billion-plus coming over the next three years in the U.S. alone.

And there’s going to be over $2 trillion up for grabs globally within the next six years. So if you missed the 700% growth this year, you can still capitalize on the exponential expansion — and 71,000% growth — to come.

My partner and I have honed in on three investments that will help you capture the lion’s share of that growth. One’s already a global CBD force to be reckoned with. One provides a service every producer in the industry will be required by law to have. And the third is setting itself up to be the only company hemp and cannabis growers do business with.

I don’t have the space to tell you all about them here, but my partner and I put a report together detailing the whole opportunity. Just click this link to get access.

And make sure you read to the very end to find out how you can get a free one-month supply of some of the finest CBD oil available and try out this medical phenomenon for yourself. That’s a $99 value, and it’s yours for free — my gift to you.

But you’ve got to check out the report to find out how to claim your FREE sample.