Recent events in this country should have us all questioning if these states of ours are really “United.” After years of escalating tensions, there is a clear sense of catastrophe looming over America’s future. Now, experts are actually counting down to the day when the United States finally admits that the “American Experiment” was a failure. 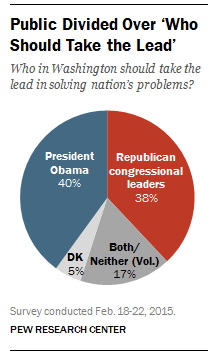 The most obvious driver behind the impending fracture of the union is that the people of this nation can’t seem to agree on anything. We can’t even decide how to begin fixing the problems at hand.

Should we continue on our established path, or attempt a new approach? It’s the reason why presidential candidates like Trump, Carson, and Sanders are gaining so much momentum.

The country is at a complete stalemate, and our citizens are fed up.

The only issue where Americans come together in agreement is their universal frustration and distrust towards our government. The most recent polls from 2013 show that trust in government is at an all time low:

That’s 81% of the American population, all feeling that they “almost never/rarely” trust our government to do "what is right." 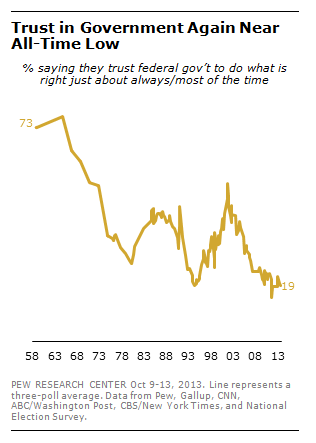 This is about all of those frustrations and divisions culminating in a single, nation-shattering event — a complete social, political, and economic upheaval that expert analysts expect is less than a decade away.

A significant part of the problem is the simple fact that our federal government has become too large, and therefore completely inefficient. Our country is too diverse for a single governmental body to decide what is right, or best, for 300 million Americans who are clearly divided.

This polarization is not a new development.

In fact, our national Constitution was almost never ratified because half of the founding fathers believed that the federal government would be too big. The entire point of the Revolution was to break away from big government rule, not to just create a new powerful body that encroached on states’ sovereignty and personal liberties.

This anti-federalist resistance was so strong that civil war nearly broke out after an anti-federalist protest in 1788. The ratification of our Constitution came down to threats and shady middle-of-the-night politics that basically excluded staunch anti-federalists and forced the vote.

There’s a reason that our kids don’t learn that part of the story in U.S. History class.

With such a shaky foundation, it’s no surprise that the “American Experiment” is a failure. Polarization of this country is bringing the United States to its knees. It has already put a severe halt on the policymaking necessary to relieve national debt, spending, and escalating culture wars.

There are some analysts who name 2025 as the year for a major breakup of the United States. With that horizon just a decade away, it’s time to prepare for the inevitable consequences.

Advocates for breaking up the union (and their numbers are growing) believe that it would increase accountability and efficiency of government. No more wasteful spending. No more throwing tax money into a mysterious black hole to never reap the benefits of our contributions. No more sweeping policies that are either irrelevant or detrimental to personal liberties.

Irrelevant policies are enacted partially because the United States’ Senate is the least representative body of government in the free world. Contrary to popular mantras, there is no “power of the people” or “majority rule” in this alleged democracy.

California’s economy is the 8th largest in the world, but its senators’ votes can be negated in a heartbeat.

The founding fathers saw this problem, too. Alexander Hamilton openly criticized the Senate, saying that it, “contradicts the fundamental maxim of republican government, which requires that the sense of the majority should prevail.”

The Senate was created and structured this way in order to prevent large-population states from essentially running the government and ignoring the needs of lesser populated states.

All of the Americans living in Wyoming or Alaska — or any of the lesser populated states — are important. They deserve representation, and their interests are clearly different than those of more densely populated areas. However, it’s becoming increasingly clear that the concept of equal representation has been absent from this government for a long time. As the current situation stands, there’s no possible way for local or region-based interests to be effectively addressed. Instead of taking action to improve the lives of their constituencies, elected officials just waste time bickering amongst each other and pandering for support.

To be honest, the American people are sick and tired of it. To repeat the earlier sentiment: you don’t need charts or graphs to sense the resentment in this country. It’s only a matter of time before that resentment boils over.

Getting what you pay for? Not in America.

As if political failure is not enough to break up the union, the situation becomes even more aggravating when you look at the price tag.

American citizens pay federal taxes to the government, which is then tasked with redistributing (transferring) that tax money back into areas of need: infrastructure, defense, health, etc.

As a taxpayer, you probably already know that the tax system in the United States is extremely progressive, and equally exorbitant. The real question is whether or not it’s effective.

Effectiveness is measured with a simple question:

How many dollars of transfers does a household receive for each dollar of taxes it pays? That is, what is the ratio of transfers to taxes?

Check out the map below: 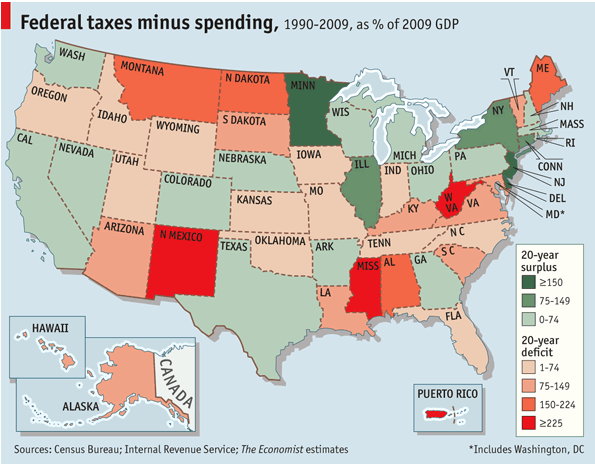 Between 1990 and 2009, the U.S. Federal government transferred almost $1.5 trillion to Virginia, but that state only contributed $850 billion in taxes. That’s a surplus of almost $600 billion.

During the same time Delaware taxpayers contributed $211 billion, but Federal spending there was barely more than $85 billion. To put it another way, Delaware’s tax contribution amounted to double the size of its 2009 GDP, but the federal government’s spending in the state didn’t even amount to half of that.

In total, there are 20 states that paid far more than their “fair share” for two decades straight, but never saw any benefits from the federal government. 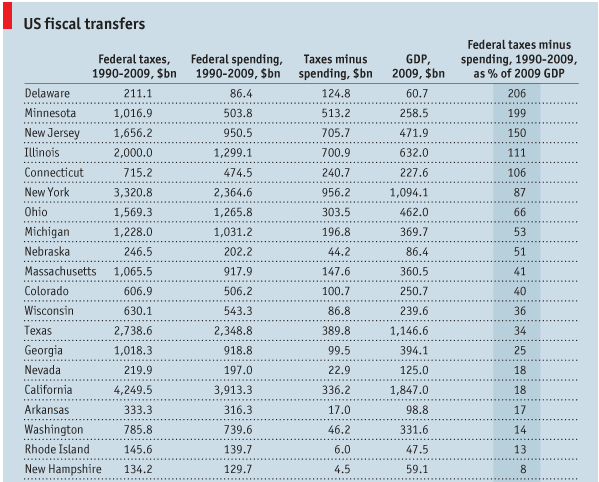 In theory, the funds are supposed to be redistributed among the states to promote economic equity. We get it — giving for the greater good, helping those states which are worse-off economically.

But the reality doesn’t exactly play out that way. Let’s look at unemployment rates: 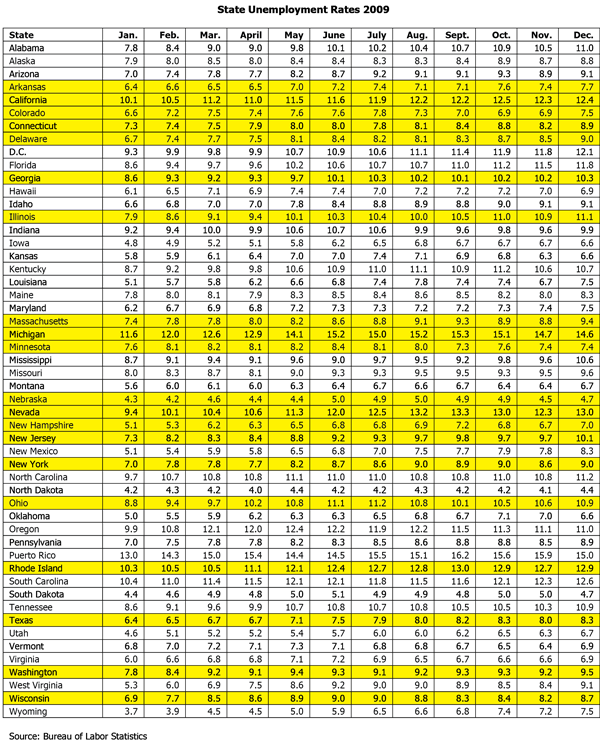 At the end of this 20-year period of unequal tax transfers, the states that gave the most but received the least ended up worse off. Americans who were paying more than their fair share of taxes experienced unemployment rates significantly worse than Americans in states receiving transferred funds from the federal government — receiving their hard-earned tax money.

American taxpayers will not stand for this much longer. The system needs to change, and that change is not far in the future.

It’s time for government officials to actively improve the lives of the citizens who voted for them.

It’s time for your tax dollars to pay for your needs — roads in your cities, social security for your family, education for your children.

The America we live in now is a failed experiment. Again, the number of experts predicting a break up of the union grows every day.

Well, you’re already living in it. Now, it’s just a matter of drawing new lines on the map.

However, your real concern shouldn’t be the geographic impacts.

The benefits of the break-up will be smaller, efficient government and the elimination of wasteful spending. It will be the end of never experiencing benefits of the taxes you pay.

However, before those advantages take hold, one major event will take place:

The Dismantling of the Dollar

The single massive weakness behind our currency system is the dollar’s lack of any inherent value. Think about it: in reality, all of those bills in your wallet are just rectangles of cotton fiber paper.

Basically, those rectangles are only worth whatever value we decide to attribute to them.

When the United States breaks apart, the dollar will mean nothing. It will have no value.

You have two options. When the inevitable occurs, your wealth could be entirely dependent on scraps of worthless cotton fiber. The other option is to be one of the prepared few, and have your wealth in an ancient material that has been valued since the dawn of trade economies.

Gold is the most secure way to basically guarantee that your wealth is protected in the face of economic and political calamity. No matter the method, investing in gold is a strategy that should be on the mind of every American who wants to ensure the stability of their wealth, especially with the events taking place in this country.

Right now, JP Morgan has the biggest stockpile of silver the world has ever seen. The financial firm increased silver stores from 5 million ounces in 2012 to 55 million physical ounces now.

We have to assume that this is in anticipation of another crisis. CEO Jamie Dimon said it himself not too long ago — crisis is coming.

Only a fool would ignore the signs of this impending event. It doesn’t take charts or graphs to see that it’s time to start actively seeking stable stores of value to protect your principal. The alternative is nothing short of complete financial disaster.

If you, like so many others, are concerned about protecting your savings into this country’s inevitable future, gold must be part of your portfolio.