Odds are, when someone mentions “social media,” the first thing that comes to your head is Facebook (NASDAQ: FB.) The social media giant started out small in Mark Zuckerberg’s Harvard University dorm room, isolated to the students on campus. By 2005, it had expanded to a handful of universities and businesses, but remained a college-oriented program. There was a level of exclusivity among the user base, and room for growth.

Fast forward to today, and 62% of America’s adult population uses Facebook. The biggest growth in user base last year was among adults over the age of 55. Facebook added 12.4 million new users from this older age range, an increase of more than 80%.

Unfortunately, 3.3 million American users ages 13 to 17 years old have left Facebook since 2011, as well as another 3.4 million people who are 18 to 24. Facebook's chief financial officer admitted on an earnings call with analysts that the company has noted, “a decrease in daily users, specifically among younger teens."

Even accounting for those who aged out of the youth demographics since the last report, there are still 6.7 million fewer people in these demographics, meaning younger people are either getting rid of their accounts, or not signing up for Facebook at all.

Now, it appears that Facebook stock will hit a point of stagnation in the very near future. Researchers at Princeton anticipate that Facebook will lose 80% of its entire user base by 2017. 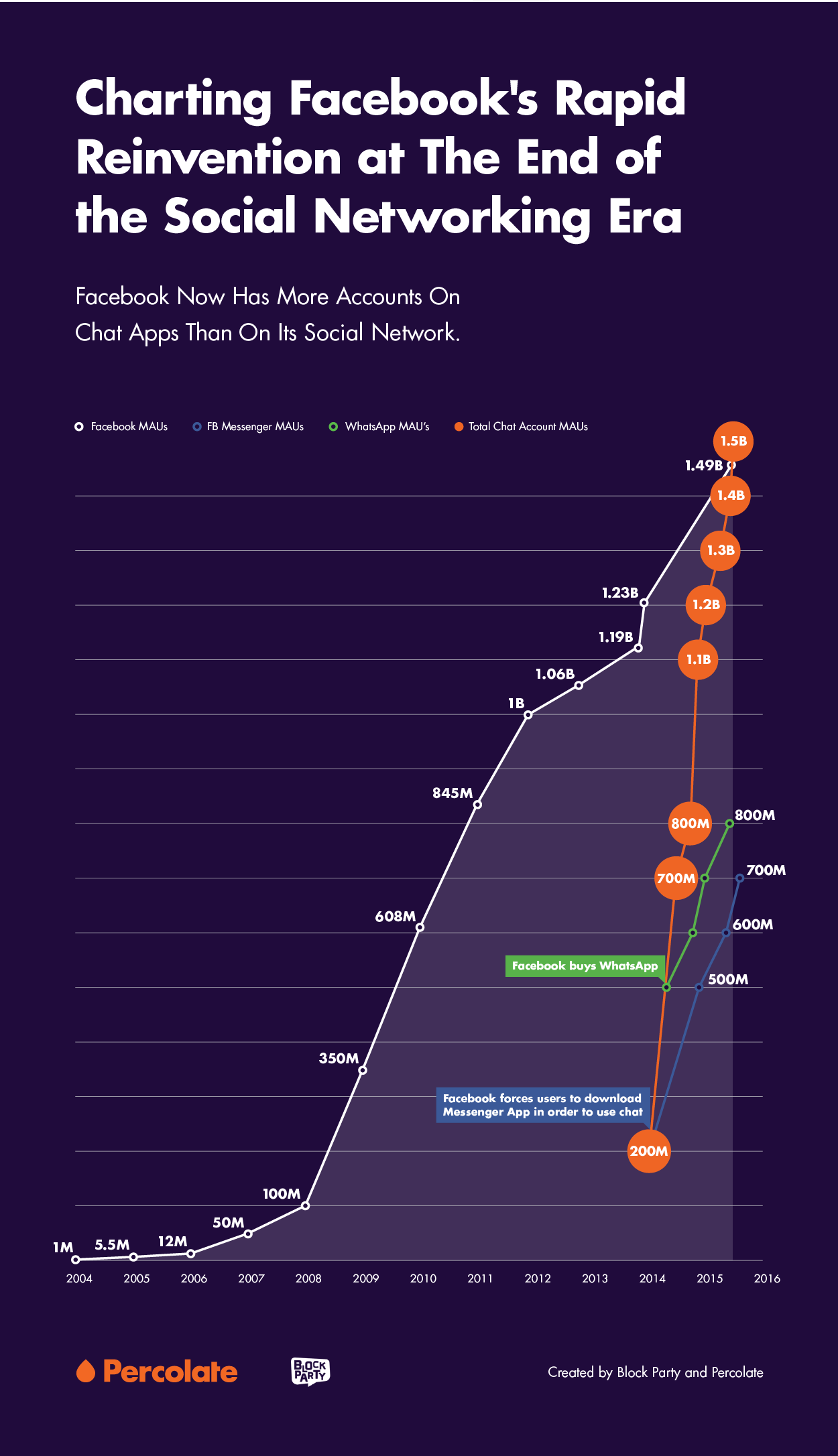 According to analysts, that’s a strong signal towards change — away from traditional social networking, and towards a variety of messaging and other social media outlets. There is strong evidence to suggest that social media of the future will be more niche-oriented, ad-financed, and user-generated.

Just to clarify: the social media industry as a whole is not struggling, and there is still a steady upward trend in the total amount of individuals who log on daily to contribute to social media. 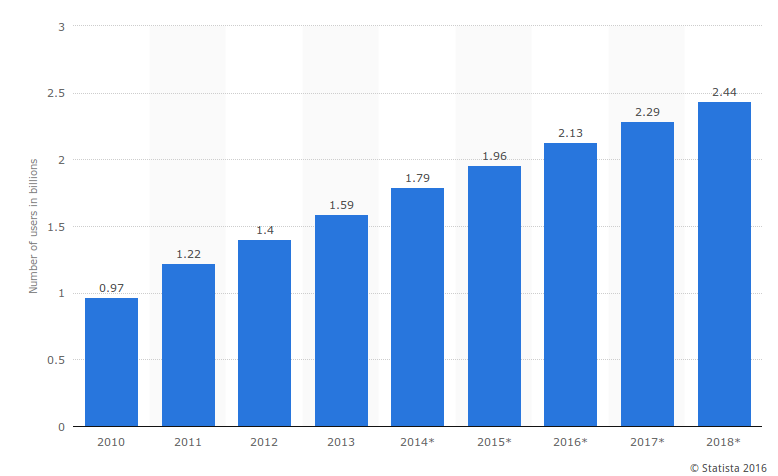 By the end of 2016, there will be an expected 2.13 billion people using social media. That’s a huge increase from 2010, with 970 million active users. What’s more, projections indicate that the number of social media users will exceed 2.4 billion in 2018. Those statistics show that one of biggest social media trends of 2016 is an increasing pool of active users.

So, there's no need to predict that Zuckerberg is headed for poverty. Investors should, however, expect to see some dramatic changes throughout the Facebook sphere and the industry as a whole. Also, don't be surprised if more unique and specialized programs experience big growth in the future.

LinkedIn (NASDAQ: LNKD), recently acquired by Microsoft (NASDAQ: MSFT) is the world’s largest professional social networking platform on the internet. The clientele of LinkedIn is generally considered to be more affluent and business-oriented than users of Facebook. It’s a marketplace that offers advantages to individuals as well as employers looking to recruit talent.

The number of LinkedIn users grew by 20% in the third quarter of last year alone. Not only is the user base increasing in quantity, but the users themselves are more stable. According to Fidelity, “Admittedly, Facebook now has more than 1 billion monthly active users. But most of these users are millennials, a customer base that's mercurial and suffers from a collective short attention span.”

This type of consumer contributes to LinkedIn’s diverse revenue structure. Instead of depending solely on advertising (like Facebook and others,) LinkedIn also generates finances from charging its premium users a regular fee in exchange for improved networking tools and capabilities. The company's third-quarter revenue increased 37% year over year to $780 million.

2016 will be continue to be a milestone year for LinkedIn, as the company intends to expand throughout developing areas like South America, Asia, the Middle East, and India, where tech savvy consumers are entering the middle class and putting more priority on professional networking. Since its 2011 IPO, LinkedIn has shown consistent growth and earnings, maintaining resilience when competitors' stocks show volatility. It checks all of the boxes: growing membership, brand recognition, a variety of revenue sources, and solid plans for future growth. While other social media stocks appear shaky and unstable, investors should maintain confidence in LinkedIn.

Guy Adami of "Fast Money," pointing to what he calls the creation of a textbook head and shoulders pattern, said, "I think we saw a short-term bottom." And despite multiple analysts cutting their price target on the stock, Adami says now is the time to buy while it's trading near three-year lows.

Forget Facebook’s current stagnant condition. Do you ever look back and wish you had gotten in on the ground floor, when shares sold for $30 apiece?

The good news is that in a way, we both still can.

Throughout 2016, seven different states will have marijuana legalization proposals on the ballot. If legalization successfully passes in those states, the cannabis industry has the potential to reach over $10 billion in the next several years. Whatever your stance on legalization or decriminalization, there’s no denying that the marijuana startup investment sphere is heating up. Fortunately, there are opportunities we can all benefit from even if our home state hasn’t made the push for legalization quite yet.

Its actual name is MassRoots (OTC: MSRT), and it’s one of the largest and most rapidly expanding social networking platforms based on connecting people and businesses through cannabis. In a recent interview, co-founder and CEO Isaac Dietrich stated, “Just as LinkedIn has become a person's professional identity and Tinder has become a person's dating identity, we want MassRoots to be a person's marijuana identity.” MassRoots has been public for a little over two years, and expects to have one million users by the end of 2016 and will continue to grow as legalization spreads. 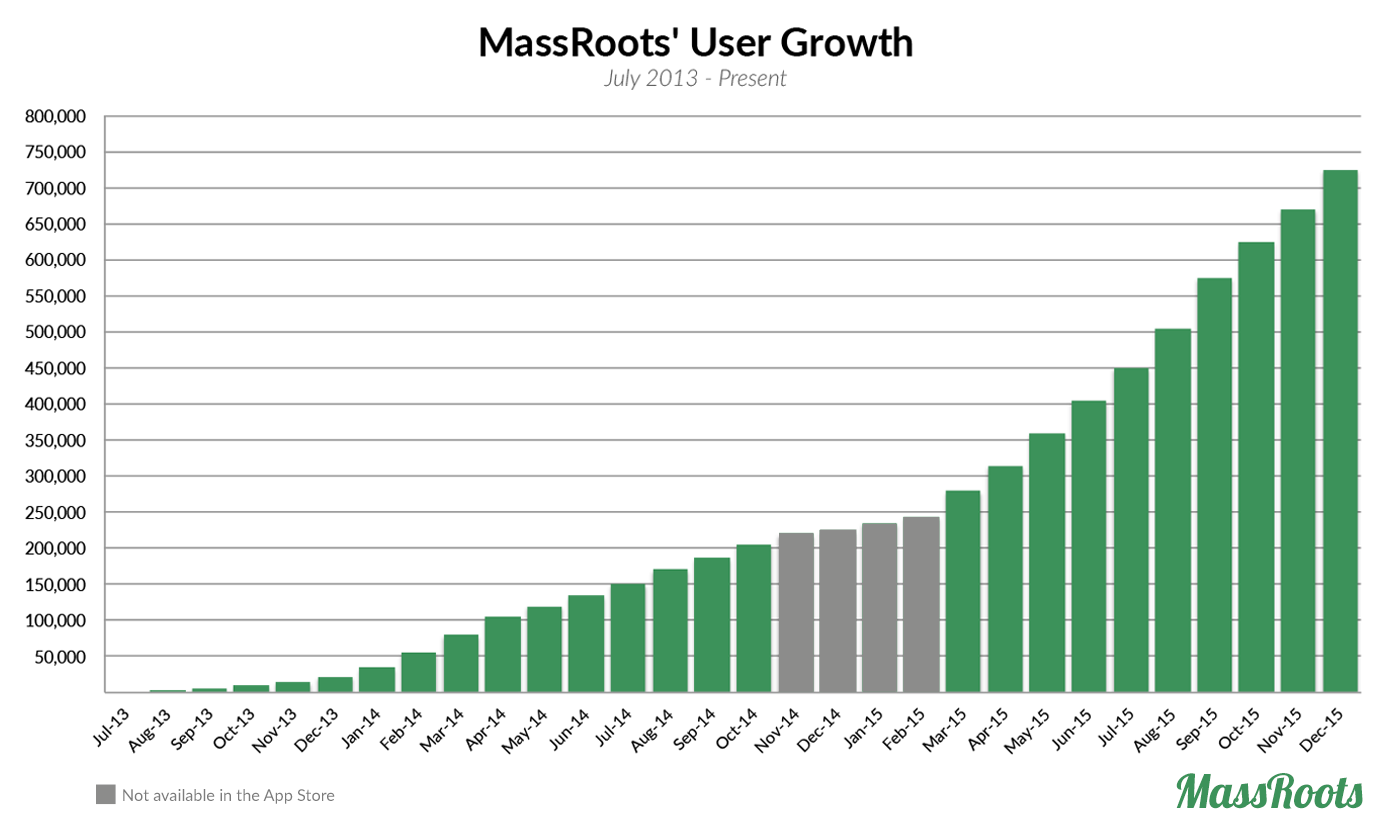 What makes MassRoots different from other potential competitors?

It was the first, it was the innovator, and it will be difficult for a competitor to enter the same sector.

Even more encouraging is MassRoots’ access to an exclusive sector of marketing revenue. While Facebook, Google, and Twitter all uphold bans on marijuana-related advertising, MassRoots not only allows those advertisements, but encourages them. The app uses geo-reasoning to provide individual users with information on nearby dispensaries — maybe about sales, or the release of new strains. In this way, MassRoots is an incredible marketing tool for local canna-businesses that were previously depending on niche magazines and newspapers for advertising. There are already over 1,000 dispensaries participating in the database, and the app has the largest following of any canna-centric social networking application.

SOCL is the only ETF currently in the marketplace that targets the social media subsector of the technology sphere. Although the fund is fairly young — born in 2011 — it returned 10% last year, outperforming both the NASDAQ and S&P. The Social Media ETF targets around 30-40 companies that the fund's fact sheet says are "designed to reflect the performance of companies involved in the social media industry, including companies that provide social networking, file sharing, and other web-based media applications."

Although a handful of social media companies have been hit hard by the market recently, the upcoming restructuring of online advertisements creates a strong degree of optimism for the future. According to most researchers, spending on social media advertising increased by 33.5% to reach $24 billion in 2015. In 2016, this number will increase even more. Indeed, projections estimate that by 2017, social media ads could account for 16% of all digital ad spending. The business model is evolving, and there will be some clear winners and losers.