Special Report: Silver Outlook 2019: Is It Time to Shine for This Precious Metal? 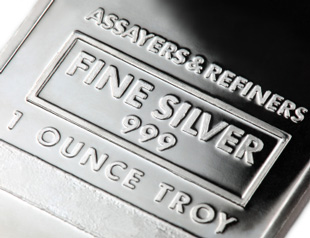 Silver has a habit of being highly correlated with gold, and we shouldn’t expect this to change anytime soon. Both metals have a history of being used as money, yet they each have unique qualities.

Silver is used more as an industrial metal. And although it is used for investment purposes, it is not used to the same extent as gold. Foreign central banks do not buy silver. If there is a recession and both metals go down, the Chinese central bank will be buying gold. It probably won’t be buying silver. This puts more of a floor under gold in a bear market.

Silver and gold will continue to go up and down in tandem, but silver will be more pronounced. Silver is far more volatile. It will go down in larger percentage terms when both metals are going down. On the flip side, silver will likely go up much faster when the metals are going up.

“It’s always tough to make predictions, especially about the future.” That’s one of my favorite quotes by the wise Yogi Berra. And as comical as it is, it’s also very true.

It is tough to make predictions. Even more so when timing is involved. Still, it is always helpful to analyze where something may be overvalued or undervalued due to factors that the marketplace may not be taking into account.

We can make predictions (educated guesses) without having to be exactly right. And we can adjust our strategy as time goes on and as new information becomes available. Therefore, let’s look at silver and its prospects for 2019.

First, it is always good to take a look back to see where we came from.

In the last 40 years, silver has had two big bull runs, surrounded by even bigger bear markets. In the late 1970s, silver skyrocketed in price. The Hunt brothers supposedly tried to corner the silver market, but new government rules put a stop to that idea. Worse for the Hunt brothers, Paul Volcker put a stop to the bubble activity.

The silver price per ounce topped out at almost $50 per ounce briefly in early 1980. After that, it was a devastating bear market for two decades. Then the 21st century brought some renewed hope to silver bulls. The price went up almost to its 1981 high in 2011. Then it came back down and at the end of 2015 was around $14 per ounce. It rose along with gold last year, getting as high as the mid $20 range before falling (along with gold) back to its current levels between $15 and $18.

In other words, silver has been a bad buy and hold investment. It is incredibly volatile. This can mean big profits and/or big losses.

Silver is referred to as the poor man’s gold. Investors looking to buy precious metals in physical form (as opposed to stocks, ETFs, futures contracts, or certificates) can more easily enter the silver market with the lower price. It is easier to pay $20 for a one-ounce silver Eagle than it is to pay $1,200 for a one-ounce gold Eagle.

While the price of silver is somewhat correlated to the price of gold, there are some major differences. Silver is not bought and sold by central banks. Silver is also used as an industrial metal more than gold. And silver is far more volatile.

In addition, when there is a major war or instability in the world, investors tend to seek gold. It is a hedge against disaster. Silver does not get the same attention.

For these reasons, silver is more sensitive to the economy, especially when price inflation is low. As of right now, price inflation — at least as dictated by the consumer price index — is relatively low. And while the economy seems to be doing better, it has seen better times.

In the short-term, the silver price is going to be quite sensitive to overall economic conditions. A recession will likely be bearish for silver in the short term, especially as industrial demand decreases.

This is not a situation like the 1970s where the economy was weak. At that time, there was double-digit price inflation, and the dollar was getting hammered.

Most commodities have suffered in terms of U.S. dollars in the last few years. The U.S. dollar has been incredibly strong compared to the other major currencies of the world. This is more a reflection of the weakness of other currencies than it is of the strength of the U.S. dollar.

So while silver still would have been down over the last several years in most other currencies, it has been worse for American investors who are pricing silver in dollars.

At this time, there is no sign that the dollar is going to give up its gains. The economies of Japan, China, and Western Europe are all struggling. And they all have the same Keynesian solutions, which mostly involve more debt and more money creation. The dollar could certainly fall just because it is overbought, but it doesn’t look like it will give up any substantial gains over the near term.

Of course, the dollar, as compared to other currencies, doesn’t care about depreciation. Investors tend to go to hard assets — especially precious metals — when they fear their money is going to lose significant purchasing power.

As mentioned earlier, historically, gold has always been known to outperform silver. However, a recent report from commodity analysts at Capital Economics said that the firm expects silver prices to start to outperform gold in 2019 when the precious metals are expected to rally.

The gold-silver ratio trades near its highest level in over two decades.

Analysts at Capital Economics have said, "Admittedly, history shows that the gold/silver ratio could rise further. It even hit 100 back in 1991. That said, both the gold and silver markets have changed markedly since then and more recent history has repeatedly shown that a ratio over 80 is hard to sustain.

"So while we acknowledge that there are scenarios in which the ratio could go higher perhaps — including a slump in the Chinese economic activity — we think that these are unlikely."

As we approached the end of 2018, physical silver neared a three-year low — closing below $14 an ounce.

If silver is able to inch towards the $15 dollar level, it could very well rally higher in 2019. It’s true, the downside of investing in precious metals is that they don’t produce cash flows themselves and are volatile. On the other hand, precious metals have the ability to maintain their global purchasing power over the long-term despite inflation or currency devaluation.

The future demand of silver will increase because of the products we have come to depend on. Electric vehicles have three times as much silver in them as combustion-engine vehicles. And as demand for electric vehicles ramps up, the demand for silver will also ramp up. Additionally, silver is heavily used in our favorite electronics.

The next decade is going to experience an upswing in silver demand. You probably already know that an increase in demand while supplies are low usually points to a price increase. That said, we could witness a significant price increase for silver in the next decade, which is good news for the people who invested when it was low.

Silver has shed 14.5% of its value over a 12-month period. Not to mention, it has declined 27.5% over the past five years. Though these would seem to be indicators to keep away from silver, right now might be the perfect time to buy physical silver and silver stocks.