Special Report: Silicon Secrets: How to Invest in Private Start-ups

Wall Street has a problem, and a pretty big one at that...

Tech companies are staying private for longer, which means the explosive gains of young, disruptive start-ups are shifting from the public sector to Silicon Valley's venture capitalist elite.

According to Jay Ritter, professor of finance at the University of Florida, the median technology company in 2000 was just five years old at its IPO. Today, that figure is more than double what it once was, as the average tech company is now waiting 11 years before offering shares to the public.

This trend is a major headache not only for Wall Street and its lucrative IPO underwriting business but for retail investors as well. Tech start-ups are now being valued higher than ever, which means the longer they stay private, the greater the opportunity being missed.

Today, Chinese smartphone maker Xiaomi Corp. is the most valuable of these companies at $46 billion, with ride-sharing app Uber not far behind at a $41 billion valuation. The numbers are staggering once you consider that at the start of 2014, the highest-valued start-up was priced at just $11.7 billion.

With private start-ups earning such lofty valuations in the blink of an eye, investors are missing out on an industry worth not tens but hundreds of billions of dollars.

The list below highlights just a few of the opportunities investors are missing out on: 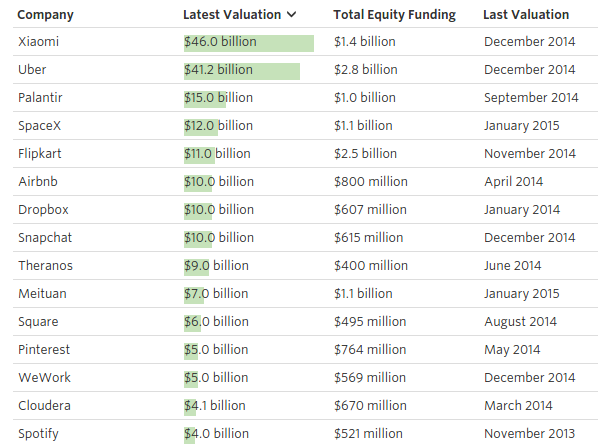 For perspective, each of the 15 companies listed above are already valued higher than 75% of technology companies on the public market. Obviously this doesn't leave too much room for growth for the public investor.

Microsoft went public in 1986 at roughly a $500 million market cap. Today, Microsoft has a market cap of $234 billion. Thus, the public investors in Microsoft have had the opportunity to realize $233.5 billion in market cap appreciation; the private investors had only a $500 million head-start. From IPO, a single share of Microsoft stock has appreciated close to 500x. Facebook, by contrast, went public in 2012 at roughly a $100 billion market cap. That means that, whatever public stock price appreciation Facebook has over the coming years, private investors have had a $100 billion head-start against the public investors. Even if you were prescient enough to buy Facebook at its public low of approximately a $50 billion market cap, the private investors remain way ahead. If you bought Facebook stock at its IPO, to realize a similar multiple that Microsoft’s public shareholders have earned, Facebook’s market cap would need to reach nearly $50 trillion, roughly the size of the total market capitalization of all publicly-traded companies in the world.

The simple takeaway from all this is that while there are huge sums of money to be made from private start-ups, the average investor has been left out in the cold begging for scraps.

Below, I'll be sharing some of my secrets on how to invest in disruptive companies like Uber, SpaceX, and SnapChat before they IPO. Keep in mind, these strategies may be unconventional and not appropriate to all investors, but I'm hoping at least one will work for you.

A BDC, or business development company, is a uniquely registered security that invests in small, up-and-coming, and privately operated businesses.

Because of this tax pay-through, investors can often profit quite handsomely from a BDC's pre-IPO investments in a short amount of time. These profits can come not only from cashing in on the substantial dividend payouts, but also by timing the entry of high-profile start-ups onto the market.

Take, for example, business development company Firsthand Technology Value Fund (NASDAQ: SVVC), which held a significant stake in Facebook prior to its IPO in 2012. Leading up to Facebook's IPO, Firsthand experienced a massive increase in valuation following the initial IPO filing...

Investors who timed this play correctly saw gains of over 300% in less than three months. That's triple your money in about a 90-day period!

Of course, when Facebook finally did IPO, the market sold off Firsthand — presumably to buy shares of the former — but by this time you could have been in and out for a quick and impressive profit.

And if you notice the price of shares after the bubble popped, you'll see that they are slightly higher than they were prior to Facebook's IPO filing. So even if you fell into a coma, there was no way you were going to lose money on this play.

Add in Firsthand's dividend payouts, and you begin to see the benefits even further. The company dished out $5.86 per share in dividends in 2014 as a result of its successful start-up investments. Investors that picked up shares of Firsthand leading up to Facebook's IPO got in under $15.00, meaning many saw a near 40% return on dividend payouts alone.

Now, you might be thinking that none of this matters because Facebook already had its IPO. From the looks of it, this opportunity has come and gone.

As for holding these kinds of business development companies long term, I'd advise against it unless you feel comfortable with the entire portfolio lineup. Otherwise, the best play is to purchase pre-IPO and sell either a) before the hype wears off or b) after cashing in on a special dividend payout.

Here's a strategy that will only apply to special group of investors, but if you make the cut, the opportunity is simply huge.

I'm talking about qualifying as an "accredited investor," which allows you to purchase equity in private companies directly.

According to Rule 501 of Regulation D of the Securities Act of 1933, an accredited investor must meet one of the following three qualifications:

1.) Has a liquid net worth of more than $1 million — excluding real estate 2.) Has earned in excess of $200,000 for the last two income tax years as an individual or $300,000 with a spouse 3.) Is a general partner, executive officer, director, or a related combination thereof for the issuer of a security being offered.

There's also an exception to the rule, which is the "friends and family" exception. This allows you to invest in a venture started by somebody close to you. It's an obvious form of nepotism, but if you're ever lucky enough for such an opportunity to fall into your lap, go ahead and take it if you believe in the company.

As for the avenues accredited investors can use to locate and purchase private equity, there are two primary options: The first is to simply reach out to a company directly — though you can't always count on a response. The second is to go through one of the many private equity platforms now available online.

I won't be listing every private equity platform on the market, but here are a two of my favorites:

Essentially the site works like this: You sign up for an account as an investor and follow the community's top investors and companies. You can either seek out leads yourself or have someone else do it for you.

Angel List allows you to co-invest with other notable investors (including Yahoo's Marissa Mayer and Uber's Travis Kalanick) by joining what's called a syndicate. By joining a syndicate, you commit to investing in that investor's future deals.

In addition to agreeing to co-invest, you also agree to a small carry fee, meaning if you profit from any of the chosen investments, a piece of that profit goes back to the lead investor. In exchange, you gain access to that investor's deal-flow and benefit from his or her experience picking successful start-ups.

The minimum investment on Angel is $1,000, but each investment requires a $250 fee. For this reason, you're best off making a commitment of $10,000 or higher to keep the fee at 2.5% or lower. Of course, if you already qualify as an accredited investor, a $250 fee isn't exactly going to put a hole in your pockets.

Rather than providing shares directly through funding rounds, EquityZen connects current shareholders looking to liquidate their shares (usually employees with company stock) with interested investors looking to scoop them up.

Let's say Chris is a software engineer working at an up-and-coming tech start-up. He loves his job and the company, but his salary is not what it would be at a major tech company. He wants to buy a house, but he doesn't have the cash to do so. All Chris has is a pile of illiquid shares.

Then there's you, the accredited investor. You want to invest in the start-up Chris works for, but funding rounds are complete and there are no shares available. If only there was a way for you and Chris to work out a deal...

Well, this is exactly what EquityZen is for. Shareholders like Chris contact EquityZen to let them know they want to liquidate their shares. EquityZen then gets the blessing of the relevant start-up and puts those shares on the market.

What's particularly compelling about EquityZen is the site's broad range of investment opportunities, many of which you wont find anywhere else. Rising tech companies listed on EquityZen have included:

One caveat worth mentioning is that the listings on EquityZen are often available only for a limited time. You'll have to keep on top of the listings to make the most of the platform.

Lastly, it's often possible to play disruptive start-ups by taking short positions in the industries they disrupt. This strategy doesn't require you to have any special investor status — all you need is a standard trading account and some thoughtful insight.

Take Comcast (NASDAQ: CMCSA) and Time Warner Cable (NYSE: TWX) for example. In the months surrounding the Netflix IPO (May 2002), the companies depreciated in value as much as -33.7% and -57.25% respectively. Granted, 2002 was a down year for the market overall, but the broader losses were just a fraction of what was seen by cable companies in the initial wake of Internet television.

Better yet, consider Blockbuster Video (I bet you haven't heard that name in a while), which went from nearly $30 a share in early 2002 to the $0.01 liquidation company it is today. Taking a short on Blockbuster in 2002 would have provided an easy 100% return. Purchasing options (puts) would have leveraged those gains exponentially.

This strategy of shorting the disrupted applies to just about any industry about to be antiquated by disruptive technology.

You can pair the rise of the first iPhone, for instance, with the downfall of Dell, Blackberry, and Nokia. You can attribute triumph of broadband and the free email model with the dethroning of AOL. You can even look at non-tech-based business models such as Chipotle (NYSE: CMG) and decide to take a short position on an outdated organization like McDonald's (NYSE: MCD).

The list of example goes on, but you get the idea — even if a company isn't public, you can still turn a healthy profit with a bit of creative thinking.

Thank you for subscribing to Tech Investing Daily. We'll continue to keep you informed on the many profit opportunities brought about by disruptive technology and innovation. We believe the best way to make money on the market is to stay informed, so make sure to keep an eye out for our daily newsletter containing free investment advice and industry insights.

To Profits and Progress,